Marvels of the West

Detail of a miniature of the naked bearded-woman of Limerick and the naked man-ox of Wicklow (who is being given a round object by another man), from Gerald of Wales's Topographia Hibernica, England (Lincoln?), c. 1196 - c. 1223, Royal 13 B. viii, f. 19

The first fully-digitised manuscript from our recent exhibition Royal Manuscripts: The Genius of Illumination has gone live (huzzah!); please have a look at the stunning images of Royal 13 B. viii now available on the Digitised Manuscripts website.

Royal 13 B. viii was one of the highlights of the Royal exhibition and the favourite of many visitors (for more details also see the Catalogue of Illuminated Manuscripts record). The manuscript is an anthology of texts about history, topography and marvels, concentrating on Ireland and Wales.  It includes the famous Topographia Hibernica by Gerald of Wales (1146-1223), the only text in the volume illustrated by a series of marginal images. 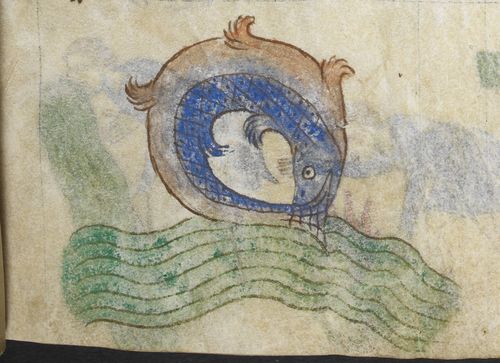 The 'proto-ethnographic' Topographia was the result of Gerald's journey to Ireland with Prince John of England in 1185.  The text contains descriptions of the Irish people, geography and wildlife, along with discussions of various miracles and the so-called wonders of Ireland.  These marvels feature prominently in the marginal images of this manuscript; see for example the leaping salmon of Munster (f. 23, above) or the monstrous bearded woman of Limerick and the man-ox of Wicklow (f. 19, at the top). 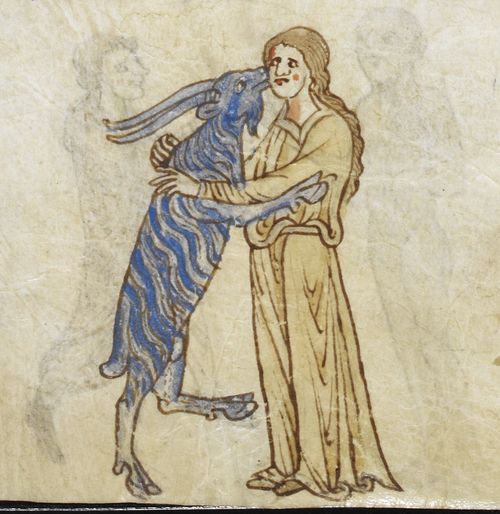 The manuscript is more than a mere description of the 'marvels of the west', however.  Gerald wrote his book as a propaganda tool in support of the English conquest of Ireland, and dedicated it to Henry II of England, who he described as 'our western Alexander'.  Some of the marginal images reflect this slant (and are far beyond any sense of 'political correctness').  On f. 19v a woman of Connacht can be seen in a lustful embrace with a goat (above), whilst on f. 28v an Irish king-to-be is immersing himself in the broth of a slaughtered white mare, with which he has just had sexual intercourse (below).  These and other examples of the purported bestiality and immorality of the Irish people were intended to serve as justification for the planned English invasion of Ireland.

Detail of a marginal miniature of the kingship ritual in Tirconnell: the killing of the white mare, the bath of the king in a stew of mare's meat and eating of the meat by the king's supporters, from Gerald of Wales's Topographia Hibernica, England (Lincoln?), c. 1196 - c. 1223, Royal 13 B. viii, f. 28v

There is some evidence that this Royal copy of the Topographia Hibernica could have been made in Lincoln, where Gerald spent time in 1196-1198, before finally returning to retire there after 1207.  This manuscript contains some local additions, including a description and painting of a deer with golden teeth, which was allegedly captured in Dunholm Wood (close to Lincoln); it is shown here compared with a similarly golden-toothed fish found at Ulster in Ireland.

Detail of a marginal miniature of a fish with golden teeth found at Carlingford in Ulster, and a deer with golden teeth from Dunholm Wood, from Gerald of Wales's Topographia Hibernica, England (Lincoln?), c. 1196 - c. 1223, Royal 13 B. viii, f. 16v

You might also like to know that this manuscript is currently on display in the British Library's Writing Britain exhibition (11 May-25 September 2012).

We will be publishing many more Royal manuscripts to the Digitised Manuscripts site in the coming weeks and months; all our new uploads will be announced here.