Among the many great Anglo-Saxon treasures in the British Library is Arundel MS 155, written by a scribe named Eadui Basan at Christ Church, Canterbury, probably between 1012 and 1023. It contains the 150 psalms and other texts used by medieval Benedictine monks, but what makes the book remarkable is its sumptuous decoration. This includes a number of initials lavishly executed in gold and in rich pigments of blue, green, red and pink. On folios 12, 53 and 93, these initials for the beginning of Psalms 1, 51 and 101 are situated within full-page frames with exquisite acanthus decoration in delicately coloured leaves that intertwine around the golden borders. 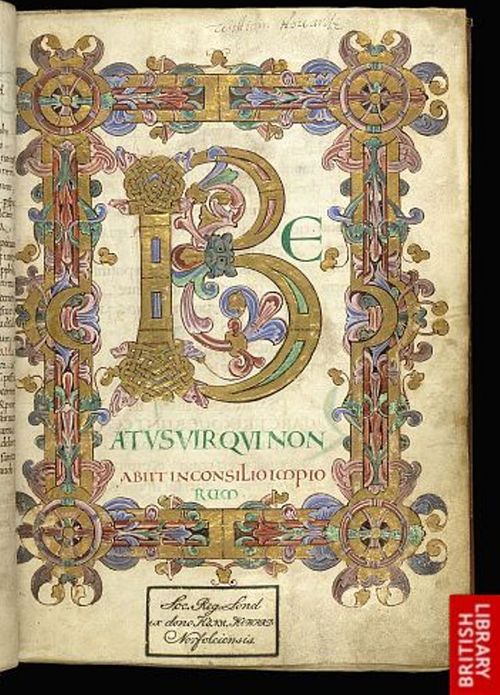 Many medieval Psalters from the British Isles also included full-page pictures before the major divisions of the Psalms, and Arundel 155 may once have had such illustrations. Now there is only a single full-page illumination in the manuscript, which appears at the end of the psalms on folio 133 recto. This image has attracted the attention of many scholars because it contains a depiction of St Benedict, considered the founder of medieval monasticism. The saint (labelled ‘St Benedict  Father and Leader of Monks’ on his halo) sits enthroned under an arch at the left while a group of monks under a second arch approach him from the right. The monk closest to the saint holds—indeed, seems to be struggling under the weight of—a large book that is open to reveal the beginning of the Rule written by Benedict as a guide for every aspect of a monk’s life. Similarly, a figure at the bottom of the page kneels before Benedict and grasps his feet in a dramatic gesture of humility and obedience. 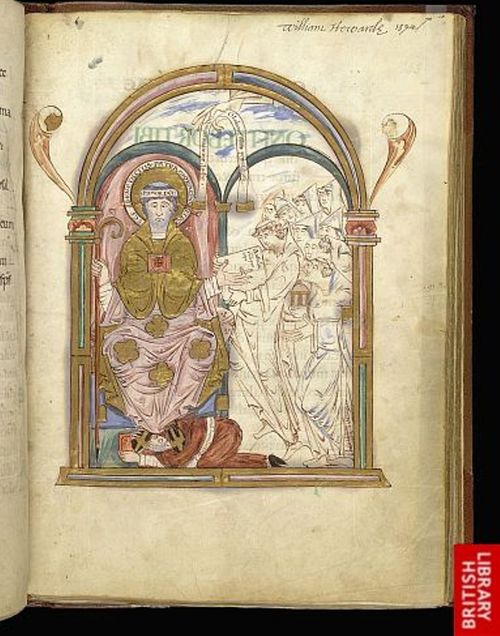 Numerous details throughout the image communicate the status of Benedict, his relationship to God (indicated by the Hand of God emerging from the clouds above) and his relationship to the monks.  Many of these were explicated by the late Robert Deshman in an essay that explored how Benedict also was conceived as a king (notice his diadem and gold clothes) and, by extension, how such Anglo-Saxon kings as Edgar were thought of as monastic leaders like Benedict (see Deshman, ‘Benedictus Monarcha et Monachus: Early Medieval Ruler Theology and the Anglo-Saxon Reform’ in Eye and Mind: Collected Essays in Anglo-Saxon and Early Medieval Art, ed. Adam S. Cohen [Kalamazoo, MI: Medieval Institute Publications, 2010], pp. 104–36). 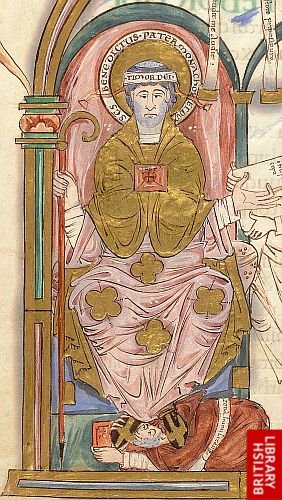 During a research trip in 2011 to investigate further the art of the Anglo-Saxon monastic movement, I realized that examining the image very closely and in just the right light revealed a set of previously unnoticed inscriptions on the page. Words are written on three of the four golden lobes on Benedict’s tunic in very pale pink ink. Thanks to the efforts of the British Library’s Conservation Scientists, a multispectral photograph can make visible what previous reproductions could not.

When I showed this picture during a lecture at the recent International Congress on Medieval Studies in Kalamazoo, Michigan, there were audible gasps from the crowd. ‘Castus’, ‘Obediens’ and ‘Humilis’ can be translated as ‘Chaste’, ‘Obedient’ and ‘Humble’ and represent three core monastic virtues. What is most remarkable, however, is the way the labels correspond to Benedict’s body: ‘chaste’ is on the lobe above his groin, while ‘obedient’ and ‘humble’ are on his knees, a graphic reminder of the kneeling performed daily by monks and modelled by the figure at the bottom of the page (probably the abbot). Many questions still remain—Why do these lobes take the form they do? Why is the fourth one blank?—but with this discovery we can better appreciate how Anglo-Saxon images not only could communicate complex theological iconography, but also evoke the bodily aspects of monastic practice. 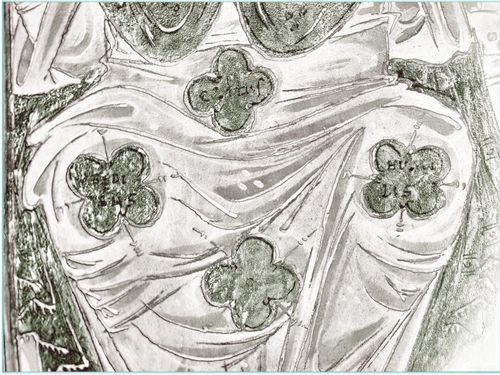 Although inevitable by the symmetrical nature of the human body, one might further parallel the position of the three words to delineate a triangle suggestive of the Trinity?