'Documentary' of a Royal Coronation

One of the most extraordinary Royal manuscripts, the Coronation Book of Charles V, is now available online on the British Library's Digitised Manuscripts site.

This extensively illustrated record of the coronation ceremonies of King Charles V and his Queen, Jeanne de Bourbon, was ‘arranged, written, corrected and illustrated’ at the special instigation of King Charles within a year of his accession to the throne. 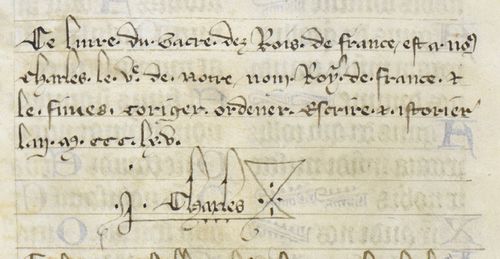 Detail of Charles V's autograph colophon, with the King's personal signature included at the end of the coronation order, stating that the volume was created for him in 1365, from the Coronation Book of Charles V, France (Paris), 1365, Cotton Tiberius B. VIII, f. 74v

The manuscript contains a directory (description and instructions for a coronation) in French and a Latin coronation order which was expanded especially for Charles’s ceremony. The most striking innovation, however, was the inclusion of the unprecedented set of illustrations. Almost forty images record virtually each step of the coronation, as though for a documentary film. The story begins at the gate of Reims Cathedral, the traditional place of the French royal coronation, with the Archbishop of Reims, Jean de Craon, blessing the King when he arrives for the evening prayer (f. 43r). 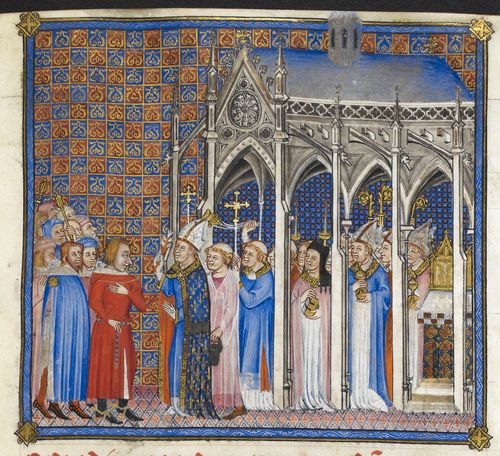 Detail of a miniature of Charles V being blessed with holy water and incense by the Archbishop of Reims and his retinue, from the Coronation Book of Charles V, France (Paris), 1365, Cotton Tiberius B. VIII, f. 43r

Seven miniatures (two additional images were excised in the 17th century) were initially planned to mark the beginning of the orders (the French translation of the directory of the ‘Ordo of Reims’, the order of Charles V, and the order for the coronation of the queen) and the most important moments of the rite. Below is the King seated on the throne holding the sceptre of Charlemagne (which you can still see displayed at the Louvre) and the ‘Main de Justice’, with the peers of France sustaining his crown, each identified by his heraldic colours. 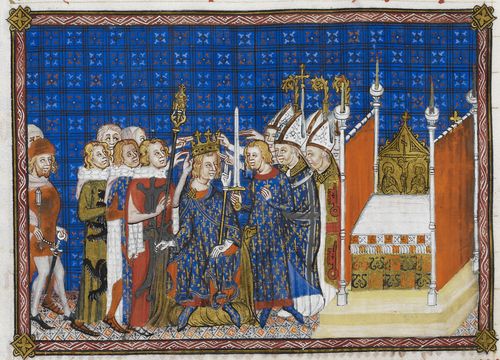 Detail of a miniature of the peers sustaining the crown and the enthronement of the king, from the Coronation Book of Charles V, France (Paris), 1365, Cotton Tiberius B. VIII, f. 59v

When work on the book was still at an early stage, the programme of illumination was considerably expanded, and more than thirty further images found their place in the lower margins of the pages. This is when the order for the Queen's coronation received an unusually lengthy cycle of illustrations. The image below (from f. 68r) shows the anointing of the Queen’s breast. The women assisting Queen Jeanne help to unfasten her dress, ensuring that no witness be allowed to see too much of the royal body. 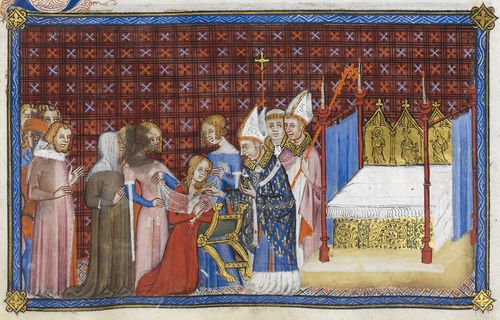 Detail of a miniature of the anointing of the breast of Queen Jeanne, from the Coronation Book of Charles V, France (Paris), 1365, Cotton Tiberius B. VIII, f. 68r

Charles V clearly intended this book to be an official account of his coronation and a model for future ceremonies. Almost 15 years after its completion, he had his coronation oath altered, so that it forbade any alienation of territories and the rights of the French crown. 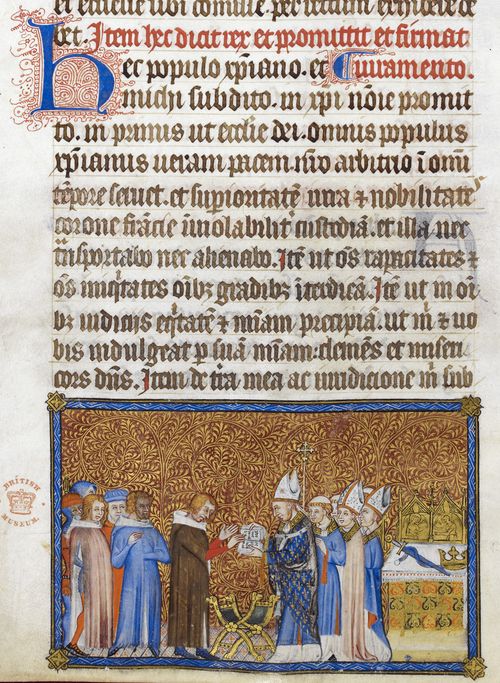 Charles also ordered the book to be supplemented with a set of oaths that implied his suzerainty over Guyenne and the Norman possessions of the King of Navarre. In May 1380, just before his death, Charles deposited a copy of his Coronation Book at the royal abbey of St Denis to be stored with other French regalia. However, the book informed only one successive French coronation, the sacre of Charles’s son, the mad King Charles VI. After his death, the Louvre library was purchased by the Duke of Bedford, the English regent in France, and the Coronation Book eventually found its way to England.

Detail of the oath of allegiance of a bishop to the king of England, added at the end of the volume c. 1450, from the Coronation Book of Charles V, France (Paris), 1365, Cotton Tiberius B. VIII, f. 80r.

More manuscripts from the former collection of Charles V will be made available on Digitised Manuscripts: