God Save the Queen: Jubilees and Coronations

The year 2012 marks the 60th anniversary of the accession of Queen Elizabeth II to the throne. Elizabeth succeeded her father, King George VI, on 6 February 1952, and was crowned in Westminster Abbey on 2 June 1953. In order to mark this momentous occasion, the British Library has put on display in its Treasures Gallery a number of items associated with the coronation of monarchs from Henry I to the present day. 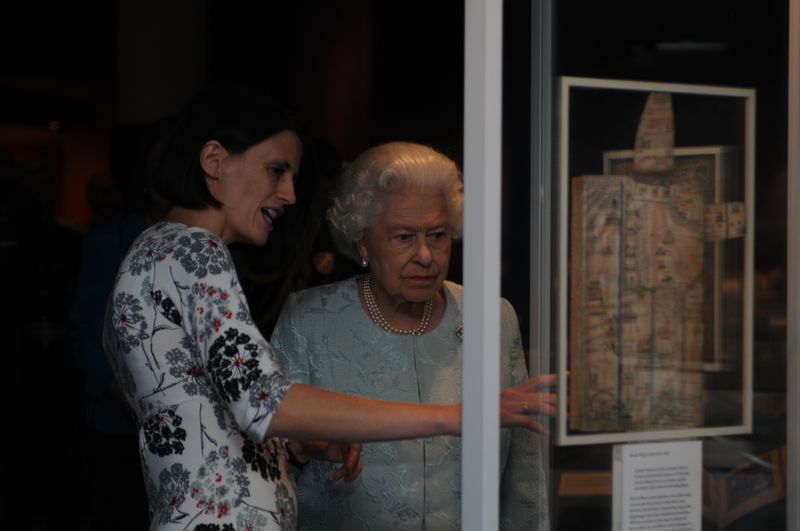 The Coronation Gospels (Cotton MS Tiberius A. II): this gospel-book, once owned by King Æthelstan (924-939), was later assumed to have been the book on which Anglo-Saxon kings swore their coronation oaths. In February 1626, Sir Robert Cotton (d. 1631) stood on the bank of the River Thames at Westminster, ready to present the manuscript to Charles I (1625-1649) en route to his coronation. Charles saw Cotton standing on the shore, and ordered the royal barge to land further upstream, snubbing Cotton in the process. 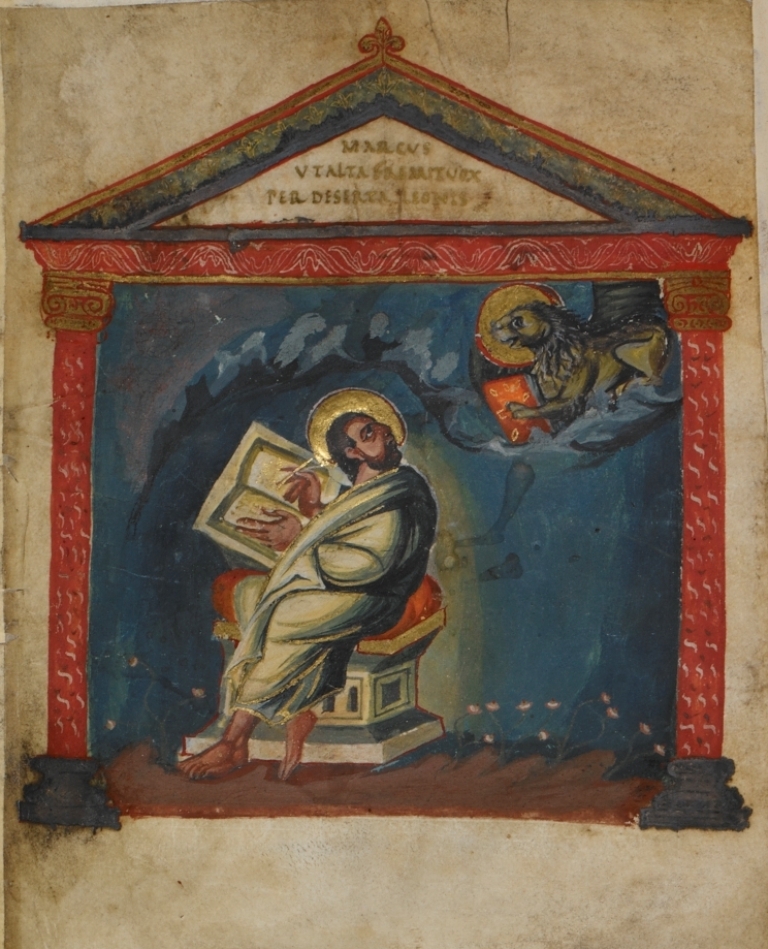 The English Coronation Order (Cotton MS Claudius A. III): a 12th-century manuscript depicting the coronation of King Henry I (1100-1135) at Westminster Abbey on 5 August 1100. Henry's coronation charter, based on earlier royal oaths, was the first to be committed to writing; in it he promised to reform the abuses of the previous regime and to restore “the law of King Edward the Confessor”.

The Coronation of Henry III (Cotton MS Vitellius A. XIII): an account in verse of the kings of England, containing an illustration of the coronation of King Henry III (1216-1272). Henry succeeded to the throne aged just 9 years old, against a background of civil war and invasion by the French. His coronation took place at Gloucester Abbey on 28 October 1216, where he was anointed by the bishops of Winchester, Worcester and Exeter, and crowned with a lady’s chaplet (a circular wreath or garland).

Thomas More and Henry VIII (Cotton MS Titus D. IV): on 24 June 1509, the archbishop of Canterbury crowned Henry VIII (1491-1547) and his first wife, Katherine of Aragón (1485-1536), in Westminster Abbey. Expectations ran high: ‘this day’, wrote Thomas More, ‘is the end of our slavery, the fount of our liberty, the beginning of joy. Now the people, liberated, run before their king with bright faces.’  More also composed a ‘coronation suite’ of Latin poems for presentation to the newly-crowned king. 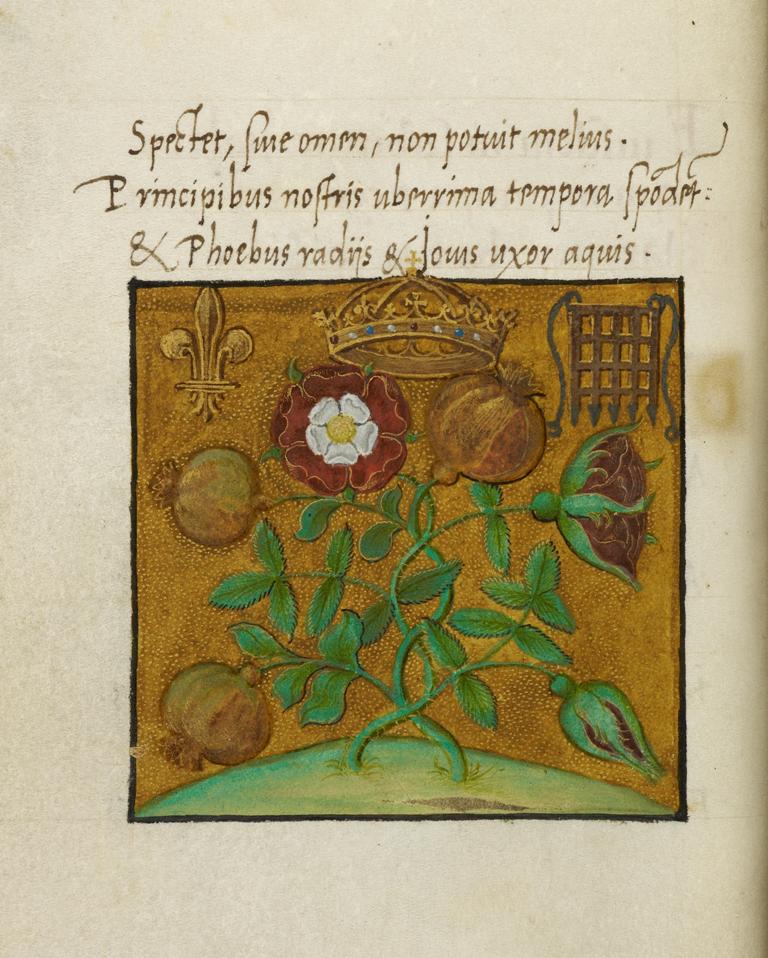 Parliamentary procession roll (Additional MS 22306): a 17th-century copy of a contemporary roll, showing the new king Henry VIII on the way to open Parliament. The procession was led by the mitred abbots, followed by the bishops; next came Henry carrying a sceptre, under a canopy decorated with a Tudor rose, then the secular peers in their robes.

Anne Boleyn's coronation (Royal MS 18 A. LXIV): in 1533, a visibly pregnant Anne Boleyn made her entry into the City of London in anticipation of her coronation. As the procession wound its way through the streets, Anne was entertained with a series of spectacular displays that had been prepared in her honour by the City Guilds. At Leaden Hall, in Gracechurch Street, Anne was addressed with the following verse: ‘Honour and grace bee to our queene Anne / ffor whose cause an anngell Celestiall / descendeth the ffalcon as white as swanne / to croun with a diademe Imperiall. / In hir honour reioyce wee all, / ffor it cummeth from God, and not of man. / Honour and grace bee to our Queene Anne!’

Anne Boleyn's coronation feast (Harley MS 41): Anne was crowned Queen of England on 1 June 1533, and that evening a grand feast was held in Westminster Hall. A sketch of the seating plan shows Anne at the high table with the archbishop of Canterbury seated on her right. On Anne’s right stood the Dowager Countess of Oxford and on her left the Countess of Worcester, whose task was to hold up a cloth to Anne’s face if she wished ‘to spit or do otherwise’. Henry VIII watched from the royal closet with the French and Venetian ambassadors.

Elizabeth I's coronation procession (Egerton MS 3320): Elizabeth I (1558-1603) ascended the throne on 17 November 1558. Her coronation took place just two months later, on 15 January 1559, an auspicious date chosen by the astrologer, Dr John Dee. This drawing shows part of the procession as Elizabeth rode through London on the day before the coronation, with Robert Dudley, as master of the horse, following immediately behind the queen.

‘Zadok the Priest’ (R.M.20.h.5): George Frideric Handel was appointed ‘Composer of Musick for the Chapel Royal’ in 1723, and composed the music for the coronation of George II on 11 October 1727. The words of the first anthem, ‘Zadok the Priest’, are taken from verses in the Bible (1 Kings 1: 38-40), which have have been included in the coronation service since the coronation of King Edgar in 973. Handel’s setting has been sung by the choir immediately before the anointing at every coronation since 1727.

The coronation of George III (Additional MS 42863): George III (1760-1820) became king at the age of 22 and would reign for 60 years, making him the 3rd-longest reigning monarch in British history after Queen Victoria and Queen Elizabeth II. Unlike his two predecessors of the House of Hanover, George spoke English as his first language. In his accession speech to Parliament, he declared: ‘Born and educated in this country, I glory in the name of Britain.’ On display is an admission ticket to the coronation of George III and Queen Charlotte, which took place at Westminster Abbey on 22 September 1761. 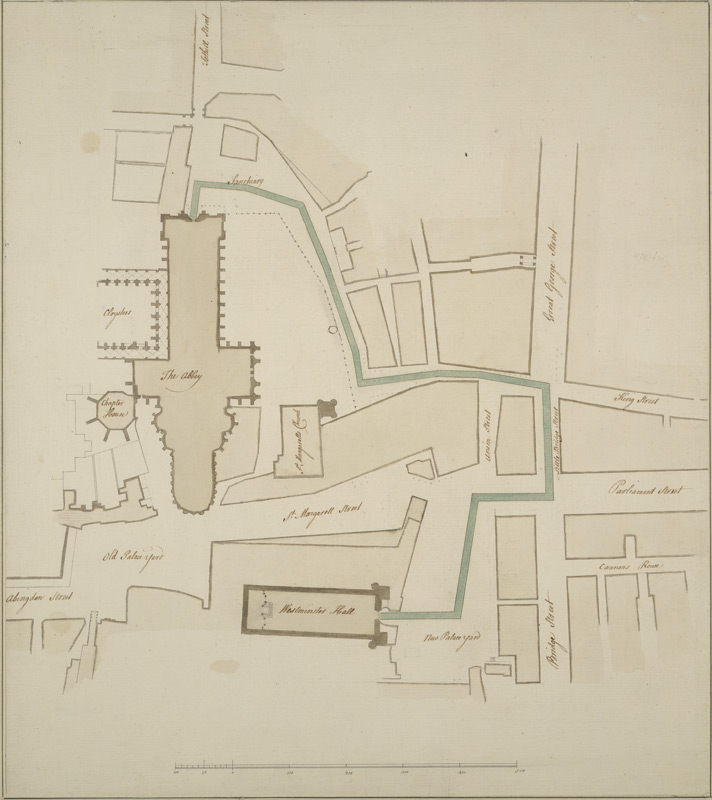 The coronation procession of King George III, with the route highlighted in green

The Delhi Durbar, 1911 (Photo 1/14 (28), MSS Eur G55/24): under The Royal Titles Act of 1876, Queen Victoria assumed the title of Empress of India. The following year celebrations were held in Delhi, in what is known as the Delhi Durbar, at which Victoria was represented by the Viceroy of India. In December 1911, the Coronation Durbar of King George V and Queen Mary was held in the purpose-built Coronation Park in Delhi, and the sovereigns attended in person. As the law prohibited the removal of the British Crown Jewels from the United Kingdom, the Imperial Crown of India was created for George V to wear. On display is a photograph of George V and Queen Mary appearing in their coronation robes, and the address of welcome presented to King George.

The coronation of Elizabeth II (Additional MS 79866B): on 2 June 1953, Elizabeth II was crowned Queen of the United Kingdom, Canada, Australia, New Zealand, South Africa, Ceylon and Pakistan, as well as taking on the role of Head of the Commonwealth. Approximately 8,000 guests from across the Commonwealth of Nations attended the service, which took 16 months to organise and was the first ever to be broadcast on television. In our exhibition is Sir Laurence Olivier’s presentation copy of the order of service.