Many thanks to those who joined us for our Royal Manuscripts Workshop on 6 June, hosted by the University of Durham. It was not only an enjoyable event but also a productive one, and we are especially grateful to Professor Richard Gameson for working with us to make it all happen. 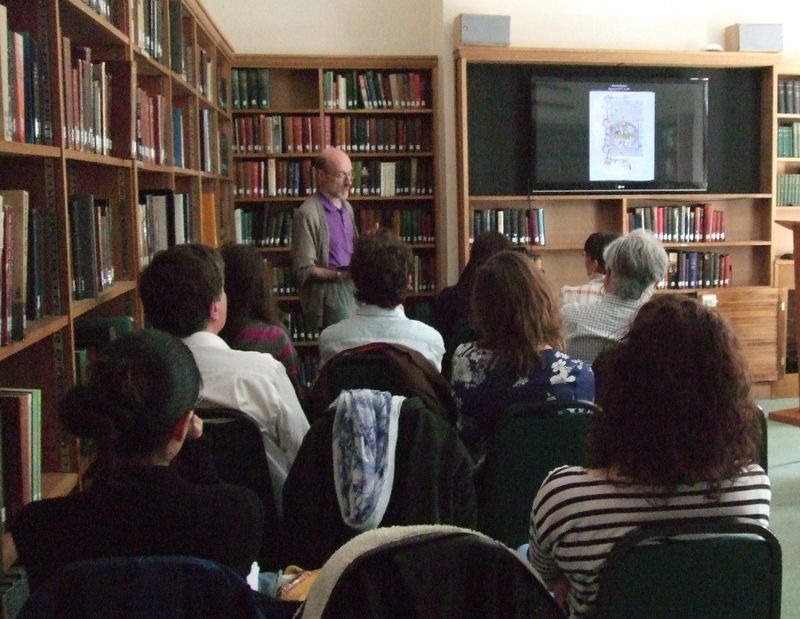 During the first part of the workshop, Dr Joanna Fronska gave everyone a behind-the-scenes glimpse into the process of digitising an entire manuscript here at the British Library. While leading us through all the stages involved, Dr Fronska highlighted both the benefits of and the areas for potential improvement to our Digitised Manuscripts site. We are going to write a separate post about the feedback we received after Joanna’s talk.

During the second part of our workshop, we were very fortunate to hear fine papers by a number of students who addressed the theme of ‘use’ and the royal manuscript. Roseanne Henderson and Jessica Lenihan tackled the somewhat unloved (but newly dubbed!) ‘Royal Aethelstan Gospels’. Both speakers drew our attention to the practical value of this manuscript for religious study, citing its highly accurate canon tables. In addition, they made the provocative point that, because such quotidian manuscripts survive in smaller numbers (though they once outnumbered the more glamorous examples preserved today), they are that much more precious for their rarity.

In the second paper, presented jointly by Clea Hodgson and Natalie Rimmer, the speakers discussed the New Minster Charter as an object intended to confirm religious reform and to promote the ideals that such reforms implemented. In a similar vein, Sarah Carter addressed the ways in which the Grimbald Gospels exemplify the aims of educational reforms made in the time of its production.

Other papers centred on the political or social uses of manuscripts. Emily Barrett, presenting a co-authored paper by herself and Verity Webster, focused on the New Minster Liber Vitae. This manuscript features a depiction of King Cnut and Queen Emma, intended to emphasise the close relationship between New Minster and its royal patrons. In another paper, Caitlin Johnson and Robert Smith examined the reconciliation between humble piety and self-promotion on display in the Bedford Hours.

Two papers focused on the degree of personalisation in books of hours, often the most highly personalised books of the Middle Ages. Carla Haughey cast a sensitive eye over the Hours of Catherine of France, wondering the level of her involvement in its production: while the manuscript appears to have been in frequent use, the illuminations lack representations of Catherine herself or any perceptibly personal touches. In contrast, the Shaftesbury Psalter, as addressed by Holly Beckwith, places the female patron of the book in a prominent position, kneeling in prayer before the Virgin and Child. It is the oldest manuscript in the British Library identifiably made for a woman, and we are pleased to report that the recent research of Susan Peters has made a strong case for the identification of this woman as Emma, the Abbess of Shaftesbury during the middle of the 12th century.

Finally, Roger Middleton, Lecturer Emeritus from the Department of French Literature at the University of Nottingham, gave us a wonderful live display of the new research capabilities of Digitised Manuscripts. Zooming in on a page to an extremely high level of magnification, he demonstrated his fascinating findings relating to catchwords in the manuscript, trimmed away but for their ascenders. What once may have appeared mere squiggles on a manuscript page are now invaluable pieces of evidence of a manuscript’s production!

One of the attendees commented, "I came because I was interested in the topic and because I have seen the exhibit. This digitization project is a great idea ... thank you for coming to Durham, it was a fascinating workshop."