Image and Text Meet in a Royal Regiment 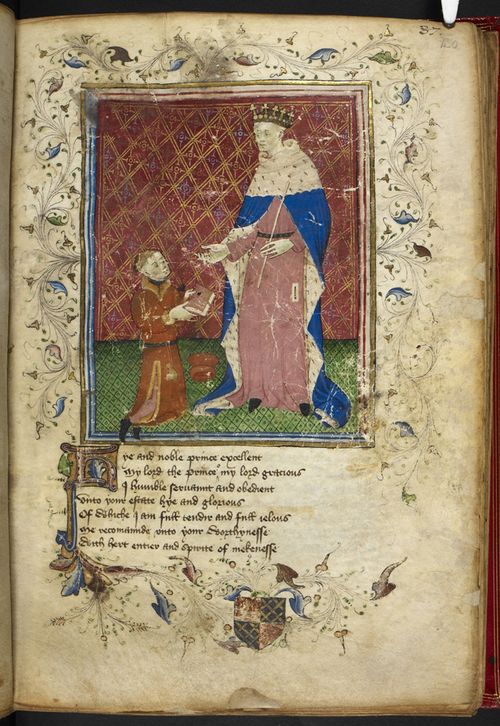 This manuscript dates from the second quarter of the fifteenth century: shortly after, that is, the deaths of Thomas Hoccleve -- the author of the works contained in this collection -- and of King Henry V, to whom, as Prince of Wales, Hoccleve had dedicated the most famous of these works, the Regiment of Princes.  The Regiment is an example of the 'Mirror for Princes' genre, where a poet gives advice to a prince or king on how he should rule both his nation and himself.  Images of all of Royal 17. D. vi are available on the Digitised Manuscripts website.

In the miniature above, we see Hoccleve kneeling before Henry, presenting him with a copy of his book.  Such presentation portraits are common features of the beginning of manuscripts, but this one is a bit unusual, falling as it does well into the text.  It comes at the point when Hoccleve finally begins to speak directly to the prince, near the end of his astonishing prologue to the Regiment -- remarkable, because the prologue alone is nearly one half of the full work.  In it, he explores his reasons for writing the Regiment, as well as his own position in the literary tradition.

And that tradition is very important to him.  Hoccleve, like a number of his colleagues in the poetic circles of early fifteenth-century London, greatly admired Geoffrey Chaucer, the author of the Canterbury Tales, and the literary lion of the previous generation.

In fact, Hoccleve claims to have actually known Chaucer before the death of the great man, a death he repeatedly laments throughout the poem: 'My dere maister [master], God his soule quyte [acquit] / And fader Chaucers fayn wold me han taught [And father Chaucer wanted to teach me] / But I was dulle and lerned right naught' (f. 41r, Regiment lines 2077-79).  As with the presentation portrait that interacts so closely with the text of the poem, appearing as it does right at the point when Hoccleve speaks to Henry directly ('Hye and noble prince excellent / My lord the Prince, O my lord gracious', f. 40r, Regiment lines 2017-28), Hoccleve also creates a unique interaction between text and image centred around the figure of 'Father Chaucer.' 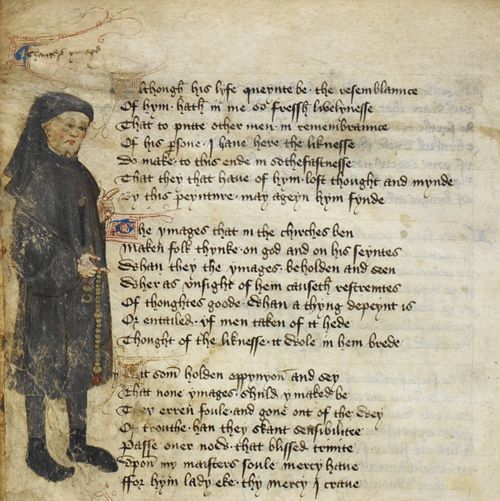 A portrait of the famous author stands in the margin.  Unlike many medieval portraits, this one actually attempts to capture a likeness.  It has been faithfully copied at the creation of the manuscript, along with the text, but is one of a number of manuscript drawings of Chaucer (compare, for example, the one found in Harley 4866) that are believed to descend from a painted panel portrait -- in this case, indirectly.  To the best of our knowledge, then, this is what Chaucer really looked like!  Here, the author points at the text where Hoccleve has explained his reasons for wanting the portrait to be included:

'Although his life queynte [quenched] be, the resemblaunce
of hym hath in me so fressh livelynesse,
That to putte other men in remembraunce
Of his persone, I have here the liknesse
Do make to this ende in Sothefastnesse,
[Caused to be made for this purpose, in truth,]
That [so that] they that have of hym lost thought and mynde
By this peynture [painting] may ageyn [again] hym fynde'.
(f. 93v, Regiment lines 4992-98)

In an age when each copy of a book was a unique artistic production, often made decades or centuries after the death of the author, Hoccleve's effort to draw text and image together so closely was an ambitious one, which we are fortunate to find here so faithfully reproduced. 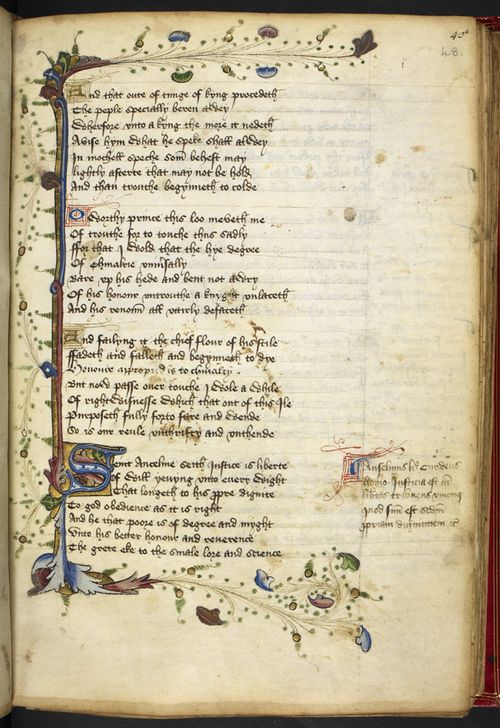 Decorative border on a page from Thomas Hoccleve, Regiment of Princes, England (2nd quarter of the fifteenth century), Royal 17. D. vi, f. 48r.  The Latin note in the margin has been provided by Hoccleve, and identifies the source he used when composing the adjacent text.  The provision by an author of such additional apparatus, while not unique, is unusual, and is a further indication of Hoccleve's intention to take into account all aspects of the manuscript book -- not just the text alone.