Not Just a Pretty Picture: Illustrating a Royal Romuléon 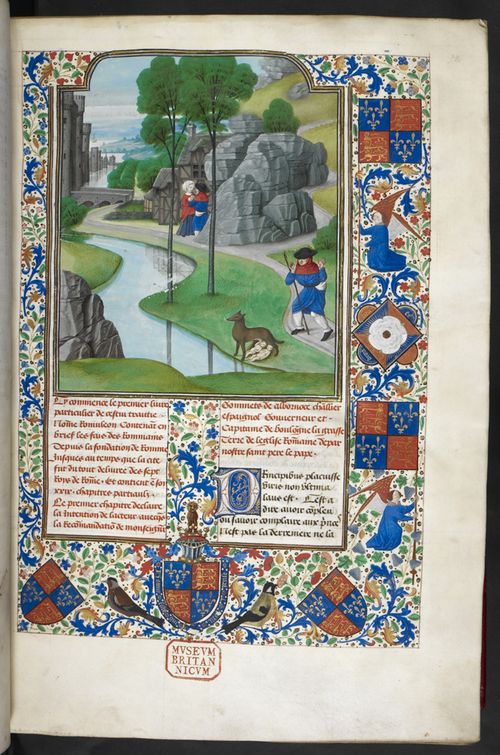 This stunning manuscript (Royal 19 E. v) was made in the Netherlands, at a workshop in Bruges. It was made, however, specifically for the king of England, Edward IV, as is triumphantly evident from the border decoration on this illuminated page. Edward IV's arms (the three lions of England quartered with the fleurs de lis of France) are carried by angels, and the white rose of the House of York features prominently. Edward greatly admired the workmanship of Flemish illuminators, and, around 1479-1480, acquired a large number of such impressively illustrated manuscripts, which remain in the British Library's Royal collection, and some of which are accessible on the Digitised Manuscripts website (see, for example, Royal 14 E. i, vols 1 and 2 and Royal 14 E. iv).

It is possible that Edward's acquisitions were inspired by his admiration for the libraries owned by some of the court surrounding Philip the Good, the Duke of Burgundy and a major patron of the arts in the 1460s. This manuscript would certainly fit such a model: the text is the Romuléon, a medieval Latin compendium, translated into French by one of Philip's court scholars, retelling the history of Rome from its foundation to the reign of the emperor Constantine. Depicted here, on the first page of Book I of the work, is the discovery by a shepherd of Romulus and Remus, the legendary founders of the city of Rome. The boys, according to the story, were the twin sons of the god Mars and a princess named Rhea Silvia, who had been forced to become a Vestal Virgin by her usurping uncle. When, despite her vowed chastity, Rhea Silvia became pregnant, she was killed, and the two brothers were cast out into the wilderness to die. They were saved from starvation by a she-wolf, who nursed Romulus and Remus, and became one of the iconic images of the Roman state.

In this illustration, Romulus and Remus are shown nursing in the foreground, being discovered by a shepherd. The picture adopts a common convention of medieval art, compressing time and combining multiple events in a single, economical image. In the background, the shepherd is shown again, now with the children in his arms, handing them over to his wife for her to raise as their own. 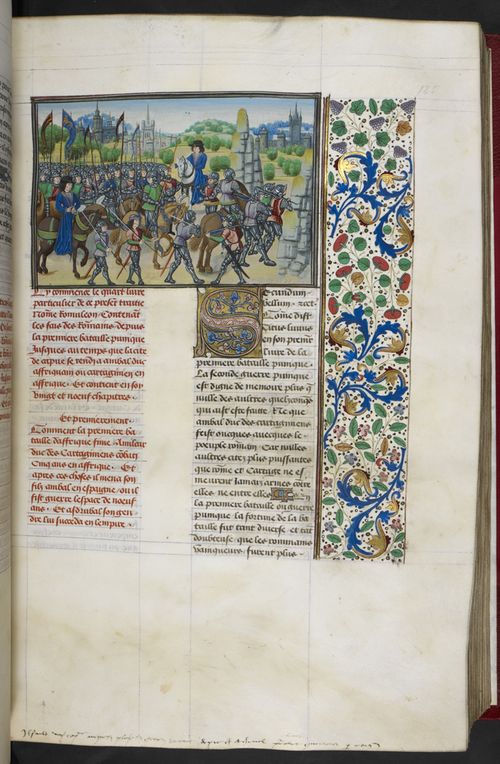 But how did the illuminator know what to draw?  Not, in this manuscript as in many others, by actually reading the book! This is clear on several pages, where we can still see the instructions on how to proceed. At the very bottom of the page pictured above, written in letters extremely small and hurried, are the original instructions to the illustrator, left by one of the manuscript's design managers and describing what needed to be shown in the illustration. On most pages, these notes no longer remain, or are only fragmentary: they are located so near the bottom of the page because it was always intended that they would be trimmed away when the manuscript was finished and bound, so that they would no longer spoil the immaculate page. While such notes may not be visually beautiful, however, they are extremely valuable to historians, providing a sneak peek into the process of production for the manuscript.

When enlarged, it is just possible to read these words, written, like the text itself, in French. They say, 'It needs a company with several armed people, both on foot and on horseback, going to war through the countryside'. Details unnecessary for the production of the illustration – like the identity of the 'armed people' – have been left out. Despite this, however, the illuminator has executed these instructions well. That the armed party, who likely represent either the Carthaginian or Roman forces during the Second Punic War, are wearing contemporary armour and march through a landscape of Gothic towers, is fully in keeping with medieval artistic conventions. 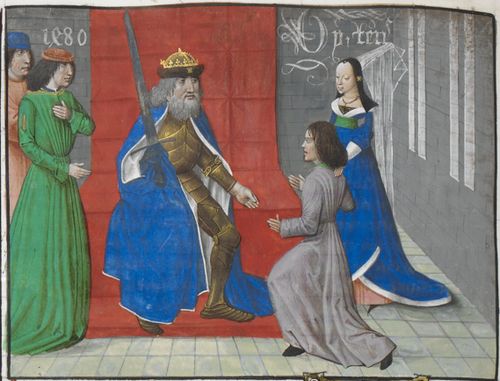