The Miroir Historial: A History of the World in a (Large) Nutshell 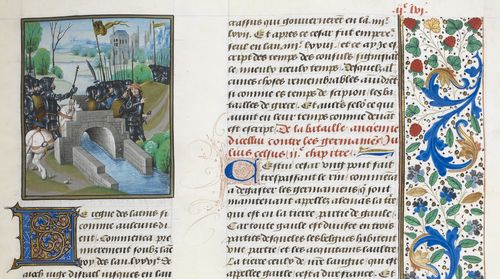 Detail of a miniature of Caesar crossing the Rhine, with the arms of the Holy Roman emperor held by one of the soldiers, at the beginning of book 7, from the Miroir Historiale (translated by Jean de Vignay from Vincent of Beauvais's Speculum historial), Netherlands (Bruges), 1479-1480, Royal MS 14 E. i, part II, f. 50r

The Miroir Historial (Mirror of History), an encyclopaedia of world history in French, was a part of Edward IV's collection of illustrated historical works produced in Bruges in the early 1470s.  Now part of the Royal Collection, it featured in the Royal Exhibition earlier this year at the British Library, and is now digitised in full on our Digitised Manuscripts site (click here for Part I, and here for Part II of the manuscript).  The text, a history of the world from Creation to the year 1250, is fully readable and the colourful images accompanying each section are available to view in detail on our website.

The Miroir Historial is based on the historical section of the Speculum maius or 'Great Mirror', a vast Latin work by the Dominican scholar Vincent de Beauvais, produced between 1230 and 1260, during the reign of the saintly King Louis IX of France. This medieval equivalent of Wikipedia was a collection of all the knowledge of the Middle Ages, compiled from a wide variety of sources, including Christian, classical, Arabic and Hebrew.  It is a monumental work of scholarship in three volumes, divided into 80 books or 9885 chapters, which became the leading reference work of its day. The Speculum was made up of three parts, each one covering a different branch of knowledge: the Mirror of Nature, the Mirror of Doctrine and the Mirror of History (a fourth part, the Mirror of Morality, was added later). 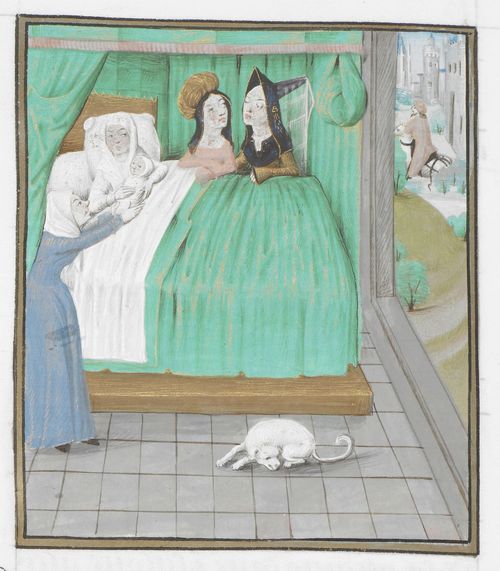 Detail of a miniature of the birth of Alexander the Great, at the beginning of book 5, from the Miroir Historial (translated by Jean de Vignay from Vincent of Beauvais's Speculum historiale), Netherlands (Bruges), 1479-1480, Royal MS 14 E. i, part 1, f. 177v

The Speculum Historiale was translated into French by a Knight Hospitaller, Jean de Vignay, in the 14th century. It covers the entire history of man from the Creation up to Vincent's lifetime, including tales of Alexander the Great, Mahomet, Charlemagne and Brutus, the mythical founder of Britain, and ending with King Louis' crusade to the Holy Land in 1250. Although the French version does not seem to have had a wide circulation, judging by the relatively small number of surviving manuscripts, the work was dedicated to Jeanne, wife of Philip VI of France and was owned by important collectors such as John, Duke of Berry. 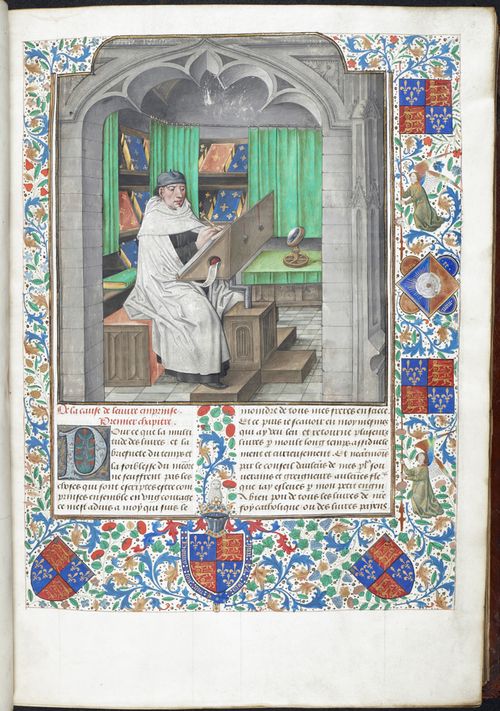 Miniature of Vincent of Beauvais as a Dominican monk, sitting at a desk and writing his book, at the beginning of book 1, with a full border containing the Royal arms of England, from the Miroir Historial (translated by Jean de Vignay from Vincent of Beauvais's Speculum historiale), Netherlands (Bruges), 1479-1480, Royal MS 14 E. i, part 1, f. 3r

Edward IV's copy contains an iconic image of Vincent de Beauvais writing at his desk (which visitors to the Royal exhibition might remember).  Behind Vincent can be seen his collection of beautifully-bound books on shelves, an indication of the possible outward appearance of the work in its original binding, which does not survive.  The artists responsible for this and the other smaller miniatures in the manuscript were professionals from a Bruges atelier that produced other books for the English king. The borders contain Edward's coat of arms, and Royal insignia of the type found in many of Edward's manuscripts, over forty of which are in the British Library's collections today.