Consider the elephant.  While elephants may have been thin on the ground in medieval Europe, the animals were still a vivid part of the medieval imagination, in bestiaries and other texts, where the exotic and frankly unbelievable descriptions were variously interpreted and misinterpreted by illuminators.

In India, so the story went, elephants were sent into battle as moving fortresses, with wooden towers on their backs, protecting the men inside.  This is the image of the ‘elephant and castle’ that became widespread in heraldic iconography, and whose best-known survival today is in the name of Elephant and Castle in south London.  Something to think about next time you're on the Bakerloo line! Miniature of an elephant and castle; from a bestiary, England, 2nd quarter of the 13th century, Harley MS 4751, f. 8r.

Elephants were also recommended ingredients in medicines, although such exotic treatments were hopefully better known in theory than in practice.  In a medical book like Harley 1585 we find a variety of uses.  The ivory of their tusks, when ground down, was thought to clear up blemishes.  And, for a patient passing blood in his urine, drinking the blood of an elephant could act as a sovereign cure.  Have a headache?  Elephant dung, applied directly to the head, ‘sets the pain to flight wondrously’!  Now there’s a remedy unlikely to be sold at the local pharmacy. The most detailed descriptions, however, can be found in medieval bestiaries, where anecdotes about elephants’ habits are paired with moral interpretations of these traits as Christian allegories.  The elephant, as it turns out, was far from prolific.  A female could breed only once in her life, when she led her mate far to the east, where mandrake grew.  This remarkable plant, whose roots resembled human beings, was an effective elephant aphrodisiac: without it, mating was impossible.  When it was time to give birth, the female would enter the waters of a lake, to protect herself and her vulnerable calf from the elephant’s principal antagonist -- the only predator large enough to constitute a threat -- the dragon.  Adam and Eve, it was explained, were like the male and female elephant, and the mandrake represented the forbidden fruit Eve led her husband to taste.  After the Fall, the couple were banished into the uncertainty of the world, signified by the undulating waters of the lake.

The elephant was also vulnerable to another kind of fall, this one literal -- although it too was also routinely allegorized.  The unfortunate elephant, it was said, had no knees, but walked on legs whose bones were a single fused column.  The elephant could not therefore bend over: the trunk was useful there!  Nor could it sleep lying down, but leaned against a tree.  A hunter could capture the fearsome beast, therefore, by creeping up and sawing through the trunk of the tree.  When the trunk broke, the elephant would topple to the ground and be unable to raise itself.  Unable, that is, without the help of a much smaller elephant (a type of Christ for its humility) who would come and lift its fallen comrade with its trunk. 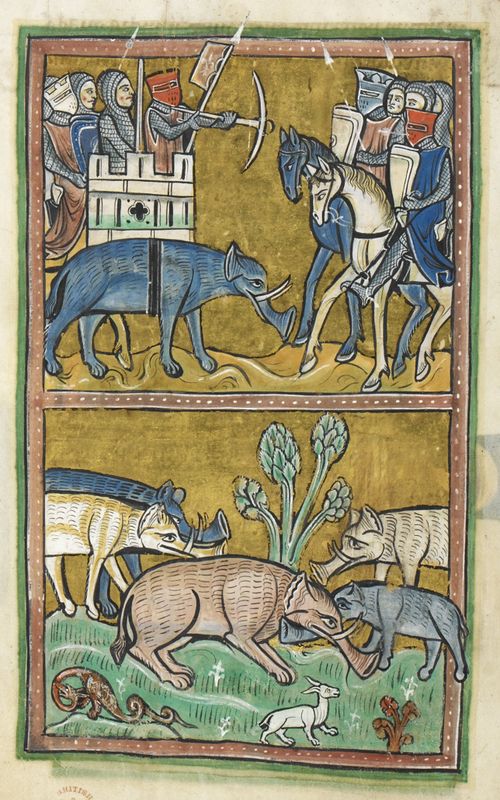 Details of miniatures of an elephant and castle and a herd of elephants; from the Rochester Bestiary, England, c. 1230, Royal MS 12 F. xiii, f. 11v.

These are terrific! I cannot help but imagine poor kneeless elephants tipping over at the drop of a hat. This also reminds me of Chinese depictions of lions, again most of the artists had never seen one. Thanks for the blog. Mandy

I immediately thought of Albrecht Durer's armor-plated rhino, with extra horn placed randomly on the back of the neck.