Beavers On The Run 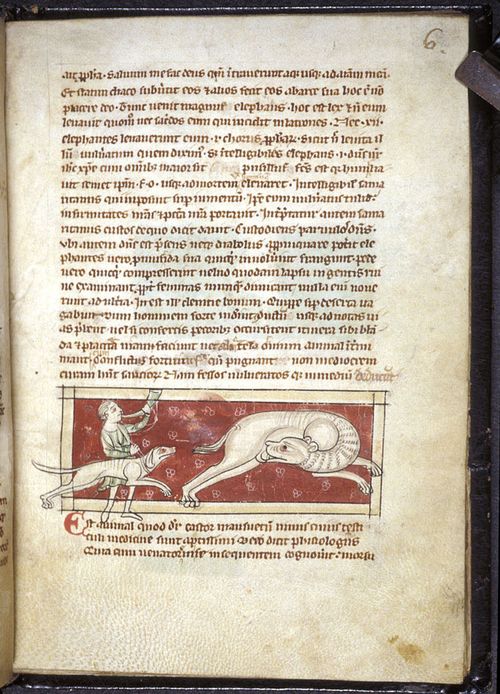 Beavers are immediately recognisable in medieval bestiaries because they are always depicted the same way: on the run, pursued by a hunter, who is frequently blowing a horn and accompanied by hunting dogs. The story of beavers as related in the bestiaries is extremely colourful. The beaver was highly sought after for his testicles, which had many medicinal uses. The clever beaver was aware of the desirability of these organs, and had a strategy to ensure his escape. If he found himself pursued by hunters and was unable to get away, the beaver would bite off his own testicles and throw them into the hunter's path. With no further motivation for pursuit, the hunter would give up and the beaver live to see another day. 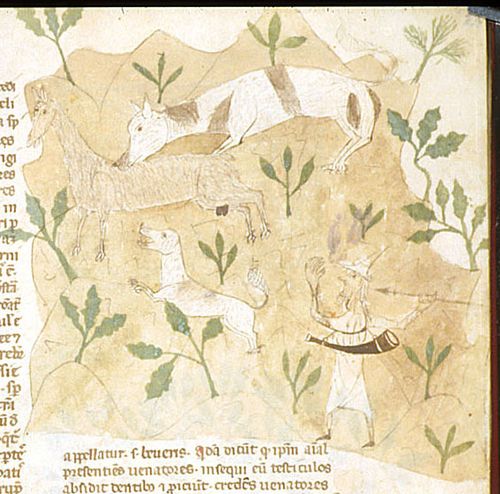 This ploy could only work once. What if the beaver found himself pursued a second time? On that occasion, he would stop and roll over, showing his pursuer that he no longer had the prize so ardently sought. The disappointed hunter would abandon the chase, again allowing the beaver to live. 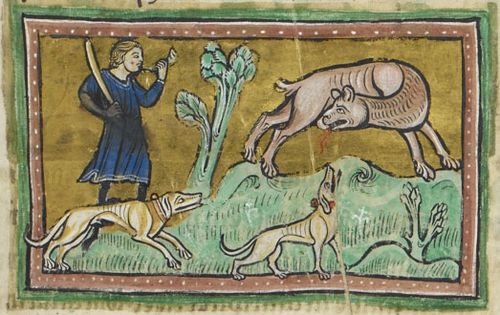 Detail of a miniature of a beaver in the act of biting off his testicles; from the Rochester Bestiary, England (probably Rochester), c. 1230, Royal MS 12 F. xiii, f. 14r.

This story may seem fanciful, but it actually holds a grain of truth. Beaver testicles have no special value, but the animal does have a gland under its tail that secretes a chemical called castoreum, a term taken from castor, the Latin word for 'beaver'. Castoreum is used by the animals for scent-marking and waterproofing, and it was this chemical, not the genitalia, that was valued for its medicinal properties. Indeed, the familiar, plant-derived 'castor oil' may get its name from its use as a more easily cultivated substitute for the scarce castoreum.

Detail of a miniature of a beaver, throwing his testicles to a hunter; from a bestiary, England, first half of the 12th century, Stowe MS 1067, f. 2v.

While the real-life beaver did not practise the strategy which the bestiaries describe, the threat posed by hunters was emphatically not a fiction. By the end of the Middle Ages, the beaver had been hunted to extinction in Britain, a practice driven by desire not only for its castoreum, but for its meat and fur. Overhunting continued into modern times, so that the Eurasian beaver is now an endangered species. Recent reintroduction efforts have enjoyed some success, and in 2009 a handful of beavers were released into the wild in Scotland – the first British beavers since before 1600! In light of this history, it is perhaps unsurprising that medieval illustrators would so consistently depict beavers as prey. 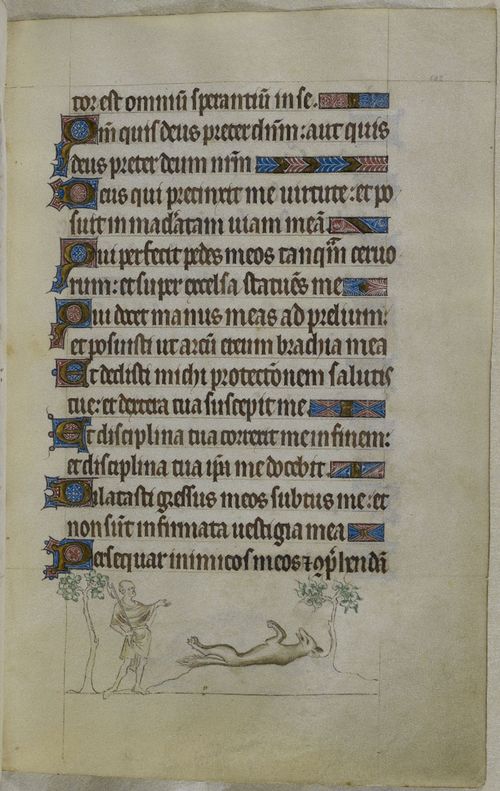 Miniature of a beaver who has been down this road before, showing his pursuer that the hunt is fruitless without a prize; from the Queen Mary Psalter, England, 1310-1320, Royal MS 2 B. vii, f. 102r. This manuscript has been fully digitised, and is profiled in greater depth in a recent post.

What a wonderful story! Why then, if that particular part of a beaver was supposed to be so valuable and great, the English expression for something good is "dog's bollocks!" and not "beaver's bollocks"?

Come to think of it, medieval people probably had a story supporting elimination of every animal: they burned cats en masse as witches' accomplices, killed owls thinking they spread plague and had a keen eye for beaver's testicles. It's a miracle we still have any wildlife left :)

I think castoreum contains a salicylate - basically, aspirin - concentrated from the willow bark that the beavers ate. So the medicine worked!

But why does the beaver concentrate saiicylate in a scent-gland? My theory is that it gives information to other beavers about the food supply (more salicylate, more healthy willows in the area) and maybe the health of the beaver (more scent, has eaten plenty of good willow). It may be just a pungent scent unique to bark-eating beavers though.