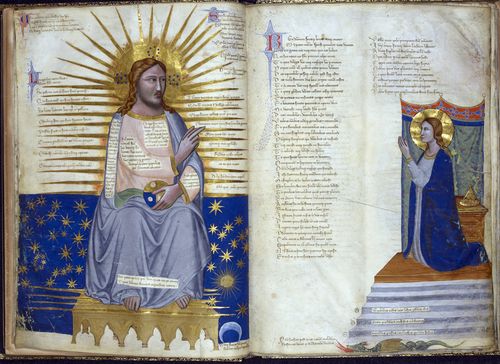 Miniature of Christ in glory holding a globe and blessing the Virgin (on the following page); miniature of the Virgin kneeling (towards Christ on the previous page), from the Address in verse to Robert of Anjou, King of Naples, from the town of Prato in Tuscany (the Carmina regia), illuminated by Pacino di Buonaguida, central Italy (Tuscany), c. 1335 - c. 1340, Royal MS 6 E. ix, ff. 4v-5r.

An exciting new exhibition has just opened at the Getty Center in Los Angeles: Florence at the Dawn of the Renaissance: Painting and Illumination, 1300-1350.  Please see here for a fabulous review of the Getty exhibition.

An important British Library manuscript, the Carmina regia, an address by the city of Prato to Robert of Anjou (Royal MS 6 E. ix) is featured in the exhibition (see here for an earlier blog post abot the Carmina).  This manuscript was also showcased in the Library’s recent Royal Manuscripts exhibition, but visitors to the Los Angeles exhibition will be able to see a different image, that of Christ Enthroned (f. 4v, see above, and at the bottom for a version of the image used to promote the exhibition).

The Carmina regia is now also available to be viewed in full on the Digitised Manuscripts website (see here). 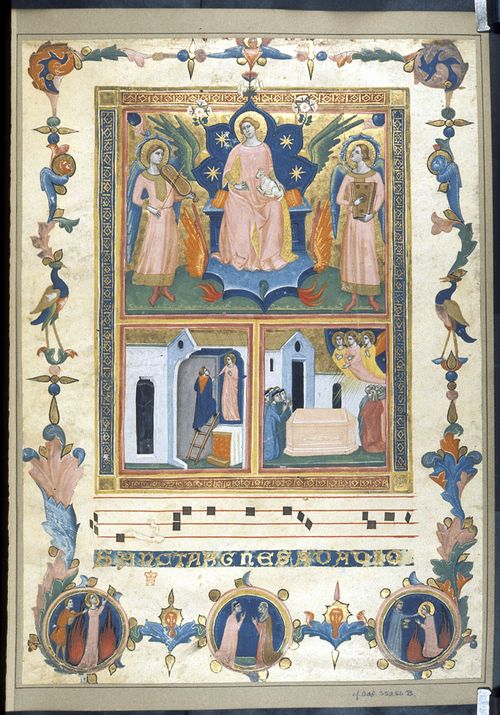 Miniature of Agnes enthroned flanked by two musician angels, with scenes from her life below. Beneath the miniature is a single four-line red stave, musical notation and a single line of text in gold capitals 'Sancta Agnese da dio'.  Illuminated by Pacino di Buonaguida, Italy (Florence), c. 1340, Additional 18196, f. 1

The Library has also lent two leaves to the exhibition, which were both originally part of a single manuscript: Additional 18196, f. 1, with scenes from the life of St Agnes (see above), and Additional 35254B, with part of a hymn to St Michael. These leaves have been reunited in the exhibition with others from the same book of songs (or laudario) made for the Compagnia di Sant'Agnese, which was based at the church of Santa Maria del Carmine in Florence.  28 leaves or fragments of this book survive, and 25 of them are featured in the exhibition. 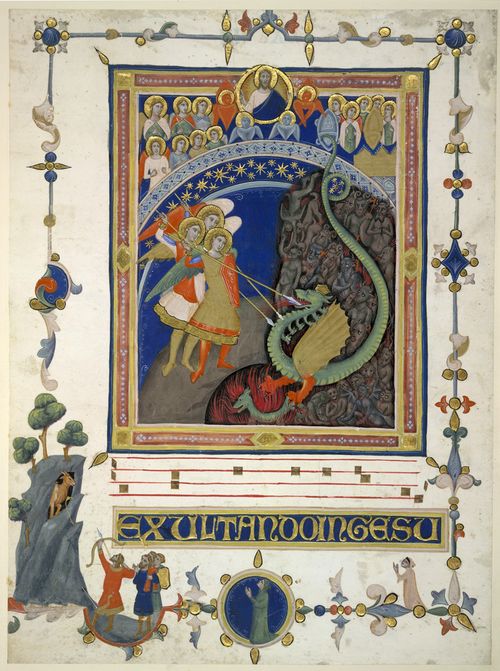 Miniature of the Apparition of Michael.  Beneath the miniature is a single four-line red stave, musical notation and a single line of text in gold capitals 'Exultando in Gesu'. Illuminated by Pacino di Buonaguida, Italy (Florence), c. 1340, Additional 35254B

The curator of the exhibition, Christine Sciacca, explains that this book was originally 'the most spectacular Florentine manuscript commission' from the first half of the 14th century.  (Christine Sciacca, 'Reconstructing the Laudario of Sant-Agnese', in Florence at the Dawn of the Renaissance, ed by Christine Sciacca (Los Angeles: J. Paul Getty Museum, 2012), pp. 219-35 (p. 219)).

All three loaned works were painted by Pacino di Buonaguida, who was active in Florence in the first half of the 14th century. 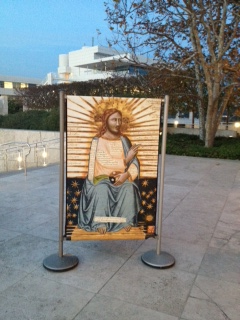