The legends of King Arthur and his court at Camelot, the quest for the Holy Grail and the related tale of Tristan and Isolde were probably as popular as Star Wars in most of Western Europe in the Middle Ages, and maybe that is why they also needed a 'prequel'! In the mid-13th century the core Arthurian stories were written down as a vast prose epic in French, known as the Lancelot-Grail Cycle, which was widely circulated for the entertainment of royalty and aristocrats. At about the same time an author who called himself Hélie de Boron, produced a companion work or prequel to the tales of Arthur, Lancelot and the knights of the Round Table. It fills in some of the gaps in the story but is mainly concerned with the deeds of the fathers of the well-known heroes: Uther Pendragon, father of Arthur, Meliadus, father of Tristan, Lac, father of Erec and the Bon Chevalier sans Peur, father of Dinadan. The most important characters are Meliadus, father of Tristan and his companion Guiron, who are involved in a series of seemingly random adventures in which the other characters appear from time to time. In the earliest copies, the work is called Palamedes, after the Saracen knight who was Tristan's challenger, but later versions are named Guiron le Courtois (or Meliadus if they contain only the first part). 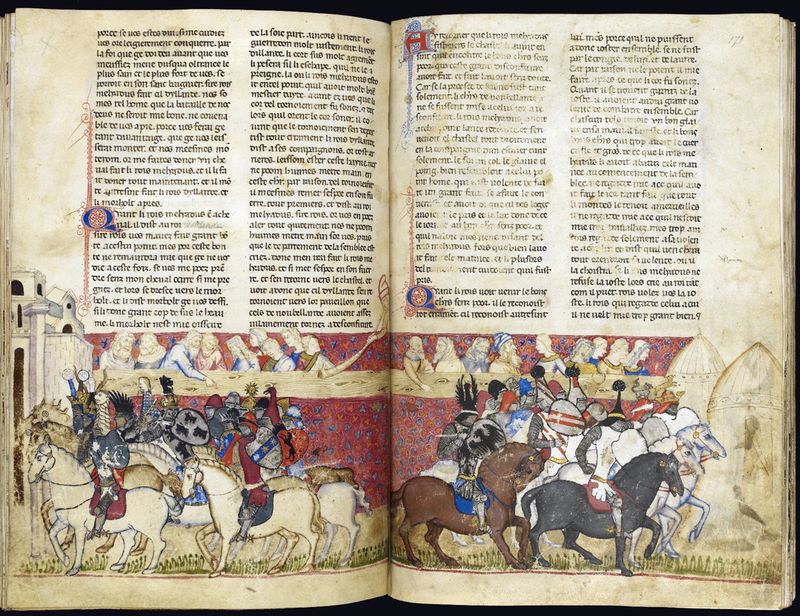 The British Library has a beautifully illustrated Italian manuscript, Additional MS 12228, which contains the prologue and most of the first part, Meliadus, ending abruptly in the middle of a sentence. Many the pages are written only in the upper half, while the lower half is filled with colourful scenes of knights, castles and tournaments. It was probably made for Louis de Tarente, King of Naples (r. 1352, d. 1362), as his arms are in the background of several miniatures. The first large miniature has a king enthroned with a knot above him, representing the 'Nodo' - the Italian order of knighthood founded by Louis. 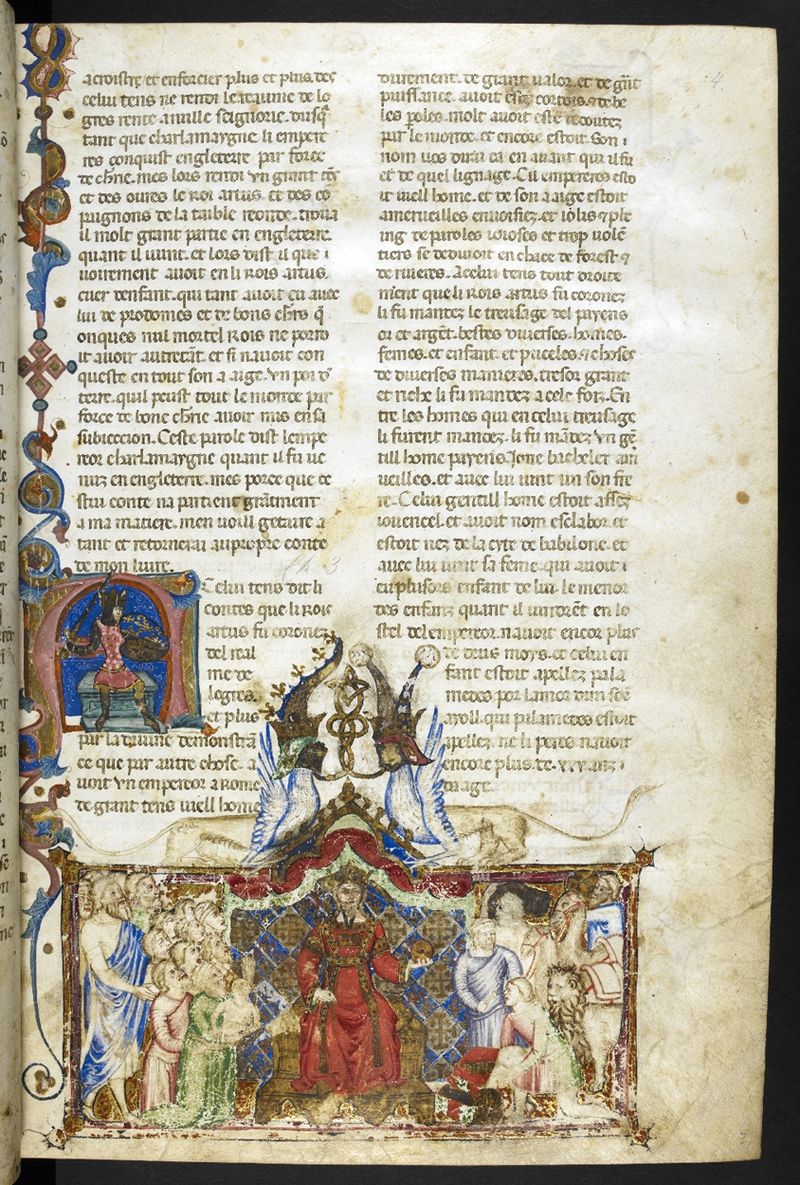 On some pages there are only outline sketches (see below) and it appears that various artists at different times have worked on adding colours and completing them, while on some pages the space has not been filled at all. In parts the colours are worn and so is the text, though in modern times someone has written over parts which had been rubbed away. 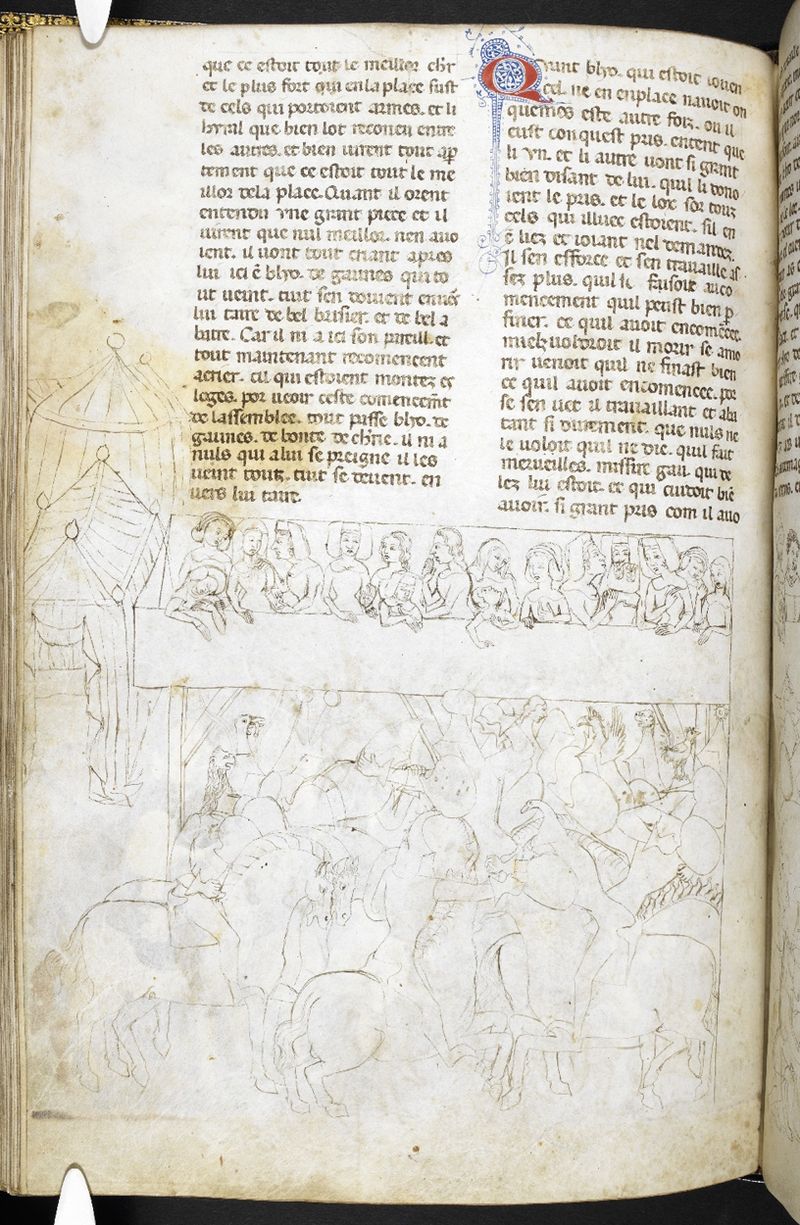 In the prologue the author claims to be Hélie de Boron, companion at arms of Robert, who wrote the Grail legend, and says that his work is written for King Henry who he has already given him two castles. At the king's request he chooses the title Palamedes, after the most courteous knight at Arthur's court and concludes that courtesy is the main subject of his tale. The story itself begins with the Romans, at the time of Arthur's coronation, when Esclabor, father of Palamedes, is captive of the Emperor, and is sent to Britain. Many tales follow, including Meliodus' abduction of the Queen of Scotland and his subsequent captivity. The text is interrupted suddenly near the end of the first part, with the Chevalier sans Peur and Meliadus debating whether to support King Arthur in his battle against his enemy Claudas.

Among the treasures hidden in the pages of this beautiful book are two pictures of medieval games. Near the beginning, on f. 23 (above), two kings are depicted playing a board game and towards the end is one of the earliest pictures of a group of people playing cards – it shows King Meliadus and his followers amusing themselves while in captivity.

Detail of a miniature of King Meliadus and his followers amusing themselves whilst in captivity, from Meliadus or Guiron le Courtois, Italy (Naples?), 1352-1362, Additional MS 12228, f. 313v

As the images are damaged in places, particularly at the edges, and the gorgeous colours are wearing off, it is important that this manuscript is handled as little as possible, and so it has now been carefully photographed by specialists at the British Library and is fully available online on the British Library Digitised Manuscripts web pages as Additional MS 12228. So while the original is being carefully preserved, anyone is able to view the stunning images up close and read the words written in a distant time and place. Does that make Star Wars technology seem out of date? Let our readers decide!

We meet Palamedes in Charles Williams' cycles of Arthurian poems, Taliesin through Logres and The Region of the Summer Stars.