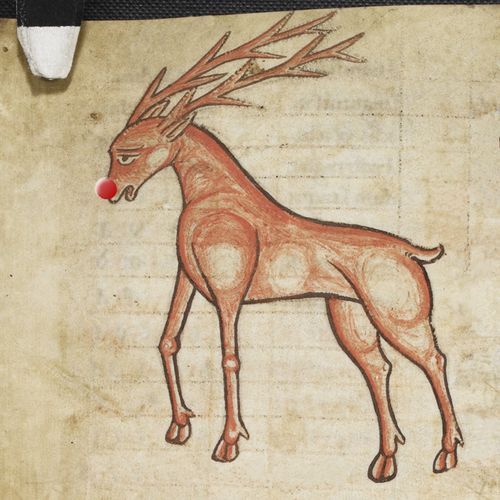 A series of posts on this blog has highlighted animals in medieval manuscripts, taking a closer look at beavers, weasels, hedgehogs and more.  In honour of the festive season, what could be more appropriate than a red-nosed reindeer?  Rudolph himself may be a product of the 20th century, but some of his distant cousins make frequent appearances in manuscripts, where the stag is both a common heraldic device and a frequent subject in medieval bestiaries. 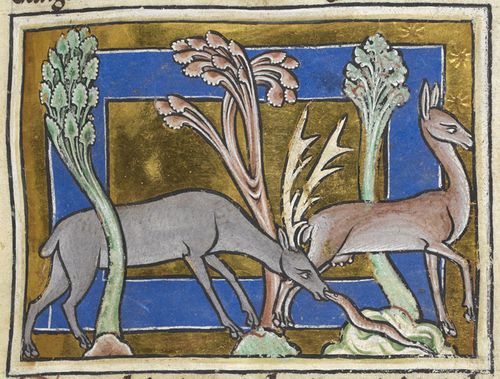 The stag is frequently depicted as the inveterate enemy of the snake.  The deer will aggressively pursue his prey, holding water in his mouth and using it to flood the snake's burrow.  When the serpent is driven out, the stag tramples it underfoot.  In other bestiaries, the stag sucks the snake out of its hole with his breath and eats it.  The viper is a dangerous meal, however, and the snake's venom poisons the deer.  But the stag has a natural defence, mitigating the toxin's effect by drinking large quantities of water.  In either case, the stag represents Christ, overcoming the poisonous devil by the pure and sustaining water of wisdom.  Other Christological imagery is tied up with the yearly shedding of the stag's antlers, which is taken as symbolic of resurrection and renewal of life. 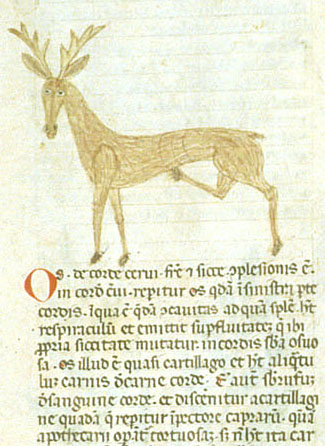 Alexander the Great's military reputation fascinated medieval readers, and his conquests in India occasioned many stories about strange people and animals in exotic locales.  He is also frequently depicted as sharing with his tutor Aristotle a passion for natural history, exploring the natural world with an airship carried by griffons and even a proto-submarine.  Alexander can also be counted as a pioneer in the field of biological research, studying deer with an animal tagging catch-and-release program that rivals the methods of modern field researchers.  Alexander ordered several deer to be captured and fitted out with special collars.  A hundred years later, when the animals were recaptured, these collars proved that they were the same individuals – still alive after a whole century!  Bestiary accounts cited this story as proof of the deer's incredibly long lifespan, attributed by the medieval writers to their diet of poisonous snakes, which had the counterintuitive effect of actually renewing youth and good health. 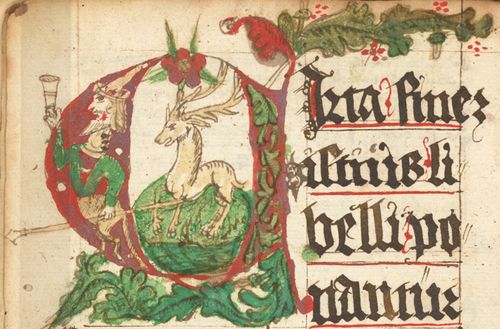 Cheers!: detail of a miniature of a stag, as well as a satyr enjoying a festive libation; from an astronomical text, Germany or Austria, 1491, Arundel MS 299, f. 4v.

With stories like these, and with, moreover, the importance of the stag both as a symbol and as a game animal for the wealthy, it is no surprise that the animals appear frequently in manuscripts – and not just bestiaries or medical books.  Stags could be both decoration and fanciful marginal grotesque.  Above, an astronomical text pairs the stag with a convivial satyr, looking like a holiday party guest, with his drinking cup raised aloft.  The satyr and stag were treated consecutively in the normal bestiary order, and the image here alludes to that tradition.  And finally, below, proof positive that while there is as yet no evidence of a medieval Rudolph, flying reindeer – or at any rate winged stags – are very much attested.  Blitzen, can that be you? 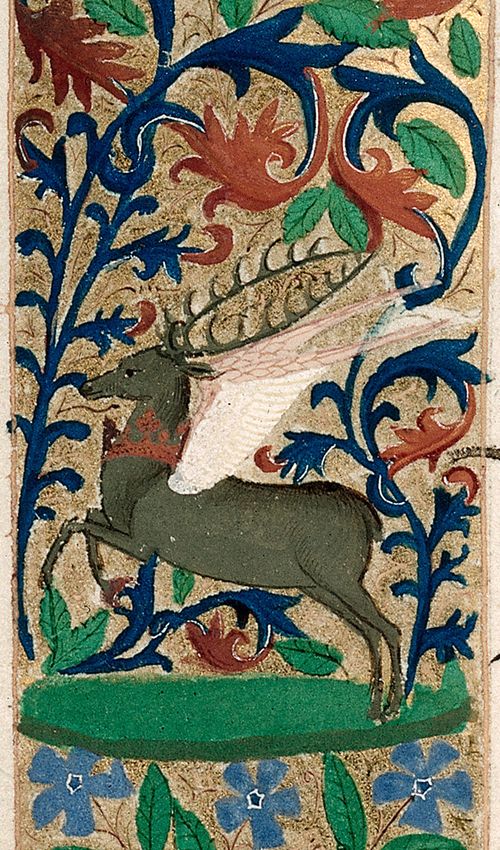 What to my wondering eyes does appear?  Detail of an imaginative marginal grotesque, a winged deer about to take flight; from Jean Froissart, Chroniques, Netherlands (Bruges), c. 1470-1472, Harley MS 4379, f. 19v.