The Conservation of Codex Alexandrinus

The British Library is committed to making available online as many of its medieval manuscripts as possible. But to do so requires considerable work behind the scenes, not least on the part of our dedicated team of conservators. We recently published to our Digitised Manuscripts site images of the whole of the New Testament portion of Codex Alexandrinus, the oldest complete Bible; and here is described the background to that achievement. 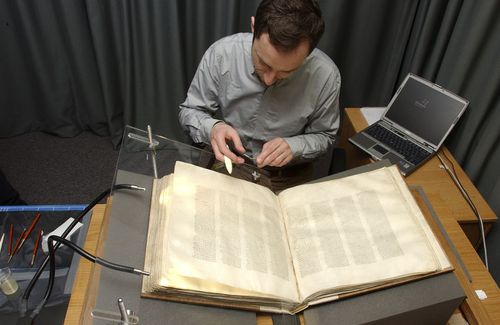 Codex Alexandrinus is currently bound in 4 separate volumes. They retain part of the leather cover that was made when the manuscript was donated to King Charles I (1625-1649), but were probably rebound sometime between the 19th and 20th century. The manuscript is written in iron gall ink on parchment. The quality of the parchment substrate is superb: it is extremely thin, comparable to the parchment used in the making of Codex Sinaiticus, another early Bible digitised in recent years by the British Library and its partners.

In the case of Codex Alexandrinus, the opening of the manuscript was heavily compromised by the last re-binding, which jeopardised our ability to photograph properly each page in its entirety. Bound books are very complex structures: they are made of many different materials and the interaction between the writing support and the mechanics of the sewing structure is vital to their survival. Unfortunately, it had been the practice in recent centuries to attach too-heavy spine linings (made of layers of stiff paper and weak fabric) to the back of book blocks, which in many cases has only served to compromise their opening. This was found to be the case when Codex Alexandrinus was examined prior to digitisation.

The first requirement was to reach the back of the book block, which entailed removal of the cover. Next, the parchment book block was gently cleaned by removing the different layers of unsuitable materials, releasing the pressure on the folds of individual sections, and improving considerably the opening of the manuscript. A new reinforcement made of archival suitable materials was then placed onto the spine to support the opening of the book, and to increase the strength of the connection between the book block and the cover. Finally, the cover was re-adhered to this volume of Codex Alexandrinus. By doing this, the manuscript could be opened sufficiently to image its pages.

The digitisation process took two days, and was strictly monitored by a conservator and a curator, ensuring that each page was reproduced in the best possible way without in any way endangering the manuscript. We hope that you enjoy the results!

I wonder if conservators in 100 years time will look at this work and frown, as you do at older work?

Whichever, please continue to delight us with the results!

Hi,
I have donated a rare Ramayan- on hand made paper written in hand in Urdu language to the Govt. Museum Jhansi, UP, India. Wonder if you can digitise that and keep a copy with yourselves for future reference.
Look fwd to hearing form you.

Thank you for putting the images of Codex Alexandrinus online.

Also, could you perhaps ask the custodians of the Codex Sinaiticus website (Scot McKendrick, and others) why the site does not mention that the English translation that is presented there is *not* a translation (or at least, not an accurate one) of the contents of Codex Sinaiticus? I am sure that many visitors have gotten the false impression that it is based on Codex Sinaiticus. This is a shortcoming of the site that has needed to be improved for years.

Would you MEM Team go back to the Codex Sinaiticus Project for an important correction.

The error on their website asserts that the English text is an English translation text of Codex Sinaiticus which it is not even remotely close to being.

Your attention to this matter would be appreciated. It has been discussed on the textualcriticism forum. And if you need more information on the history of this problem feel free to comment here or send me an email.

You can read more here about the translation of Codex Sinaiticus: http://codexsinaiticus.org/en/project/translation.aspx
The out of copyright translation of the New Testament which appears on the website was provided to aid navigation of the site for users who are not easily able to read the Greek text. The British Library is in contact with its partners in the project regarding the future of the site and together we will be considering a range of issues, including translations.