The Distinguished Pedigree of Mrs Tiggy-Winkle 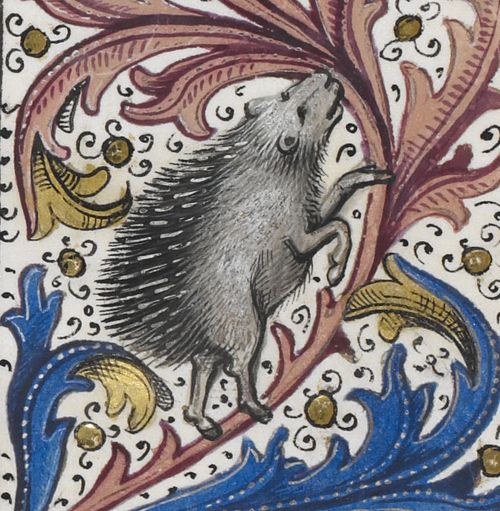 The hedgehog is one of the English language's more picturesquely named animals: the word comes from the hedge where it lives, and from the appearance of its supposedly hoglike snout.  But this term is a relatively recent coinage in the history of the language – the first recorded uses date only to the mid-15th century.  This is not to say that the common hedgehog was unknown in the Middle Ages, however.  For much of the medieval period it was called an 'urchin', a term still favoured in some dialects, but most commonly associated today with the spiky little sea urchin: literally a 'sea hedgehog'.  Even urchins came over with the Norman invaders, however, ultimately derived from the Latin 'ericius': before the Conquest, the Anglo-Saxons knew the animal as the Germanic 'igl'. 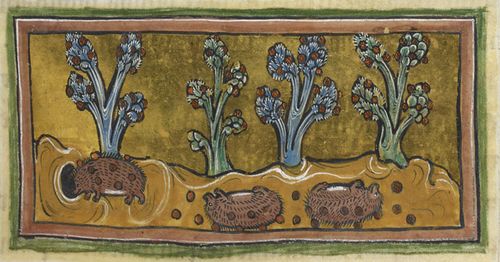 Detail of a miniature of hedgehogs sticking fallen fruit to their quills and carrying it back to their burrow; from the Rochester Bestiary, England (Rochester?), c. 1230, Royal MS 12 F. xiii, f. 45r.


Hedgehogs, however they were named, were familiar animals, finding their place in the standard medieval bestiary between the mole and the ant.  Such mundane company does not mean, however, that their story was not exotic and strange.  Hedgehogs were said to creep into vineyards when the grapes were ripe, to climb the vines and shake the fruit down to the ground.  Then, rather than eating this bounty on the spot, they would turn onto their backs and roll around, impaling the grapes with their sharp quills.  They could then trundle off back to their burrows, carrying the grapes on their spines, as a meal for their young.  The bestiary writers allegorized this as a warning of the clever stratagems of the devil in stealing man's spiritual fruits. 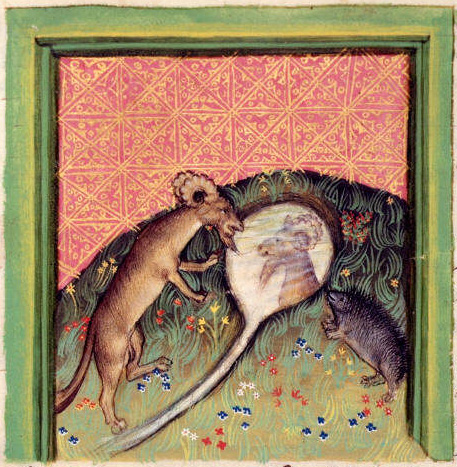 Despite this unflattering association with the infernal, hedgehogs were more often depicted favourably than not.  The Speculum sapientiae, or Mirror of Wisdom, was a Latin text that included a large number of beast fables.  In one of the fables, a goat came upon its own reflection in a pond.  The goat, seeing the horns on his head and his long goat beard, thought himself very handsome indeed, and began to bleat, boasting of his horny 'crown' and hairy 'necklace'.  A passing hedgehog, however, was less than impressed.  If the goat had impressive horns and beard, he also had an unsightly tail and a foul temper.  A profound humility, the hedgehog reproached, not vain boasting, was what made an animal truly noble.  The hedgehog here is chosen as a symbol not of diabolical trickery, but of an appropriate Christian modesty. 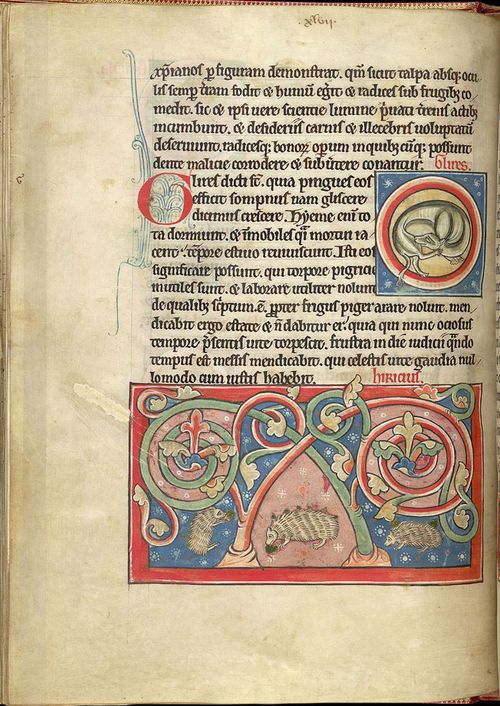 Miniatures of (above) a dormouse and (below) hedgehogs, collecting fruit on their quills; from a bestiary, England (Salisbury?), 2nd quarter of the 13th century, Harley MS 4751, f. 31v.