London is getting progressively colder, and the Summer Olympics seems a lifetime away. It's instructive at this time of year to see how winter was portrayed in earlier days. 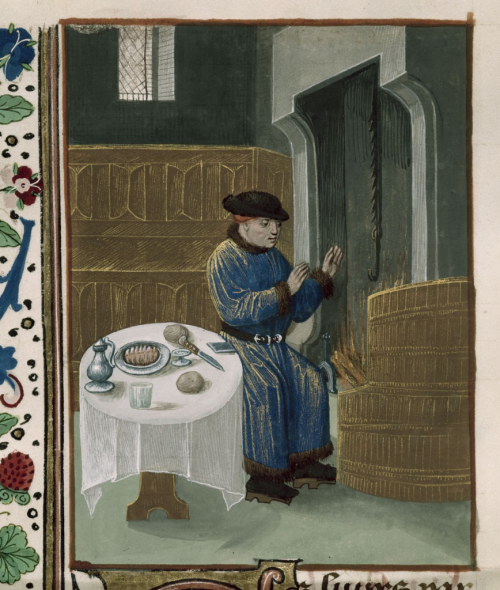 Our first illustration is taken from a late-15th-century Flemish manuscript, Royal 14 E. VI, containing a French translation of the Ruralia commoda of Pietro di Crescenzi (Livre des proffits ruraux). On f. 305v is depicted a man sitting before a fire and warming his hands, with a table laid with a meal beside him. The decoration of this manuscript has been associated with the Master of the Getty Froissart, and the book itself was owned by King Edward IV of England (r. 1461-70, 1471-83). We can all empathise with this scene of someone trying to warm themselves up, wrapped in a long cloak.

Another winter scene is found in a second Bruges manuscript, Royal 17 F. II, illustrated by the Master of Edward IV. This manuscript contains La grant hystoire Cesar, and was made in 1479. F. 116v shows the winter march of Caesar's army, with foot-soldiers seen shovelling the snow from under the feet of Caesar's horse. The whole book can now be found on our Digitised Manuscripts site. 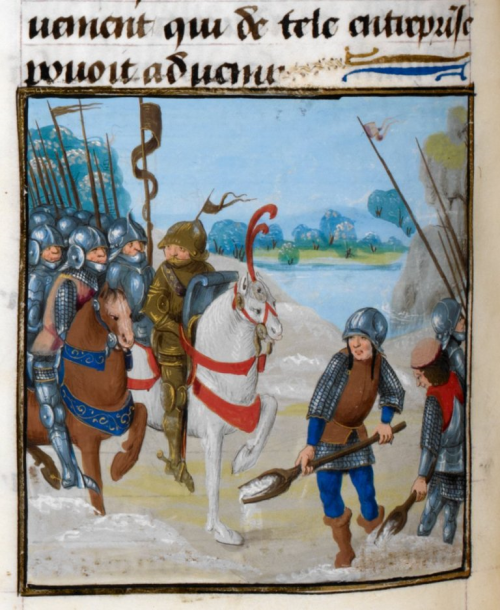 Our final illustration is less conventional. This decorated initial is found in a 13th-century French manuscript, Sloane 2435, and contains a figurative representation of the Four Seasons. Spring stands in the upper left, wearing a cote and a sleeveless surcote with his hands in the armholes; summer wears a cote on its own; autumn is wrapped in a cloak; while winter wears a hood and long sleeves. 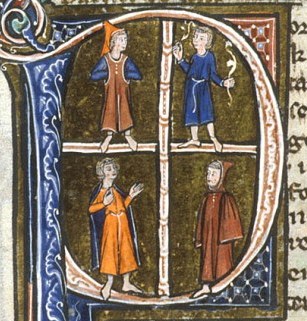 And here is the whole of the initial in question, which has at its foot a snail with a human head! 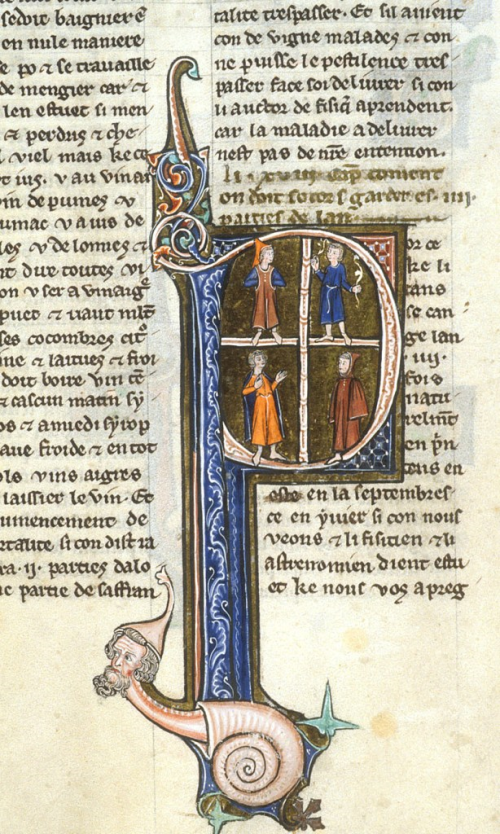 A quick reminder that images available on the British Library's Catalogue of Illuminated Manuscripts are in the public domain and free of known copyright restrictions. For guidance on their use, please click here. Something to warm you on a cold winter's day ...

I love the snail. Interesting to focus on winter scenes. More often than not, the pictures we see of long ago times are set in warmth not cold. Perhaps that reflects the tastes of those commission paintings?

Regarding the "La grant hystoire Cesar"

1. Does "illustrated by the Master of Edward IV" mean that Edward IV commissioned this manuscript? That Edward IV was the patron of "the master" (presumably some type of scribe or monk)?

2. Did Edward IV commission a lot of manuscripts about Ancient Rome? Any idea what Edward IV typically commissioned?

3. I've read Edward IV liked histories - what is a history in this period?

4. Do you "the master" (scribe? illuminator?) showed Caesar with snow because that is how he pictured Caesar's world because they had so much snow in Europe in the 1400s?

Sorry for so many questions - this is a great post.