A Calendar Page for January 2013

In an ongoing series on this blog, we have taken a closer look at images from medieval calendars, including the Isabella Breviary (please see this post for more details on calendars in medieval manuscripts) and the Hours of Joanna of Castile (Joanna the Mad).  This year, the featured calendar comes from the 'Golf Book', a mid-sixteenth-century Book of Hours (Additional MS 24098; soon to be featured on Digitised Manuscripts).  In addition to the usual 'labours of the month', the calendar also includes many images of games and sports, and the name 'Golf Book' in fact comes from an early depiction of a game of golf in one of the many bas-de-page miniatures.  Something to look forward to in the months ahead! 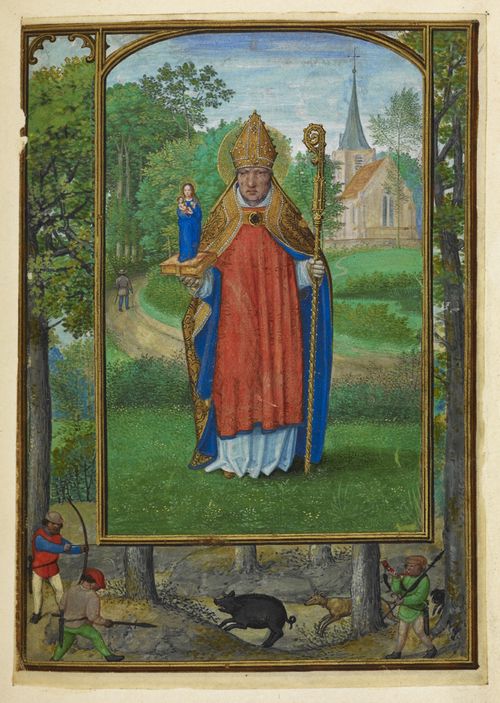 Miniature of Boniface of Lausanne, from the Golf Book (Book of Hours, Use of Rome), workshop of Simon Bening, Netherlands (Bruges), c. 1540, Additional MS 24098, f. 1r

The Golf Book is not, in its present state, a complete manuscript.  While it was originally produced as a full Book of Hours – a devotional book containing prayers to be recited at set times – most of the text is now missing.  Only thirty leaves remain from what once would have been hundreds, taken from the most elaborately illuminated parts of the manuscript: the first pages of each of one of the cycles of hours (the Hours of the Virgin), and the calendar.  The full-page miniatures were produced by an important miniature-painter working in sixteenth-century Bruges, Simon Bening (d. 1561), with the assistance of his workshop, and the Golf Book is considered one of his masterpieces.  Nothing is known about the patron of this enigmatic manuscript; illuminators in Bruges worked for buyers all over Europe.  But it is possible that the original owner was Swiss.  One of the surviving pages is a miniature of Boniface of Lausanne, a 13th-century bishop (see above).  He was not canonized until after the medieval period, and his cult in the sixteenth century was primarily a regional one. 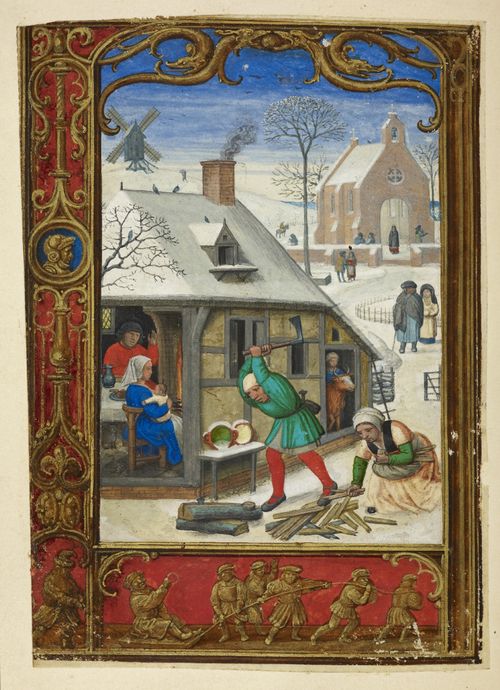 The calendar pages in the Golf Book are spread across two pages, with the first page for each month somewhat unusually reserved for a full-page miniature.  In the foreground of the opening January scene (above) is a man splitting wood for a fire, assisted by a woman close by.  Behind them a man and his wife, who is nursing an infant, can be seen in their home, warming themselves by the fire.  In the snowy background is a church, with bundled-up parishioners exiting.  The bas-de-page scene shows a group of men pulling (with great effort it seems) another man on a sledge. 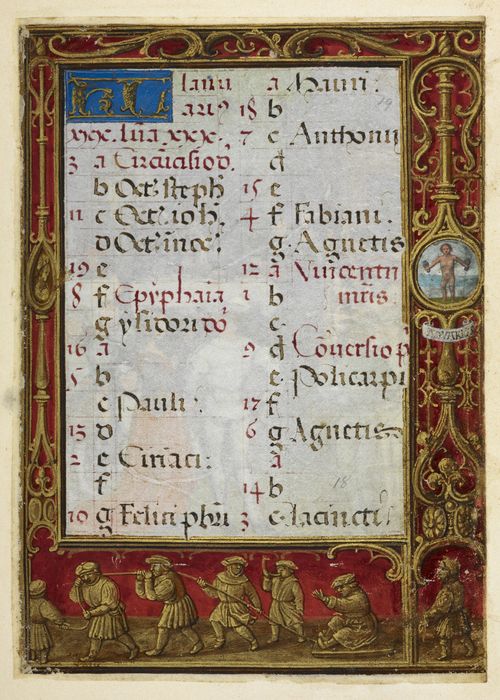 This same scene is mirrored on the following folio, which also contains a short listing of saints days for January and a small roundel of a man pouring water from two jugs, for the zodiac sign for Aquarius.