Fire is a constant hazard in libraries, and most collections of historic manuscripts have some burnt parchment. Certainly the British Library has its share, including parts of the Cotton collection. Most older manuscripts were written on parchment which, being animal skin, does not respond to heat and water like paper but becomes crisp and wavy, looking somewhat like a poppadom. When a manuscript reaches this stage, there is little conservators can do except house it carefully. 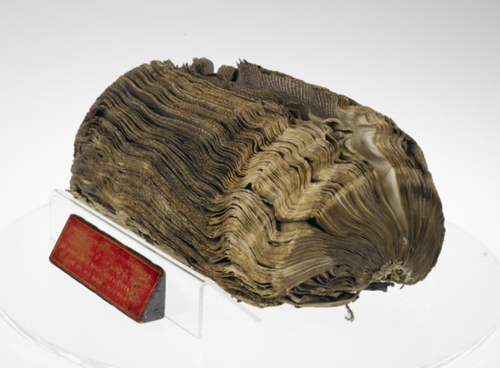 Royal MS 9 C X. One Royal manuscript has deliberately been left unconserved since the Ashburnham House fire (1731) to show the damage done to the collections housed there.

Fortunately, our ancestors knew how to preserve books. Many medieval manuscripts were originally bound in thick oak boards with clasps. When it became customary to store books upright, they were packed close on hardwood shelves. In these conditions, air circulation is limited (denying oxygen to the fire) and the dense materials diffuse heat. Surface charring inhibits the release of volatile gases, delaying combustion. Today we also rely on low oxygen systems to prevent fires. 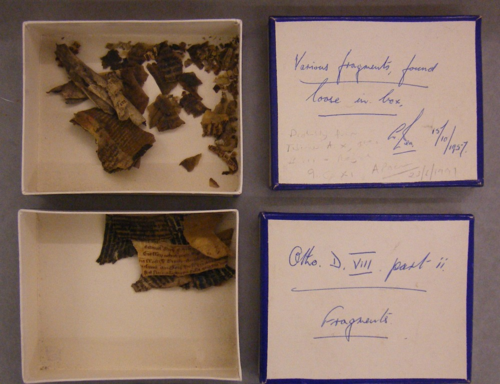 Cotton Fragments XXXII. Boxes of fragments remain from the 1731 fire; some attributable to specific manuscripts, others found loose in the containers that held the damaged manuscripts.

If parchment has been well made, most of the fats will have been removed from the skin by scraping, leaving a dense mat of collagen fibres which are then stretched flat to dry. When heated, collagen shows little change at first; then the fibres contract swiftly and irreversibly over a small temperature range of just a degree or two (called the shrinkage temperature). 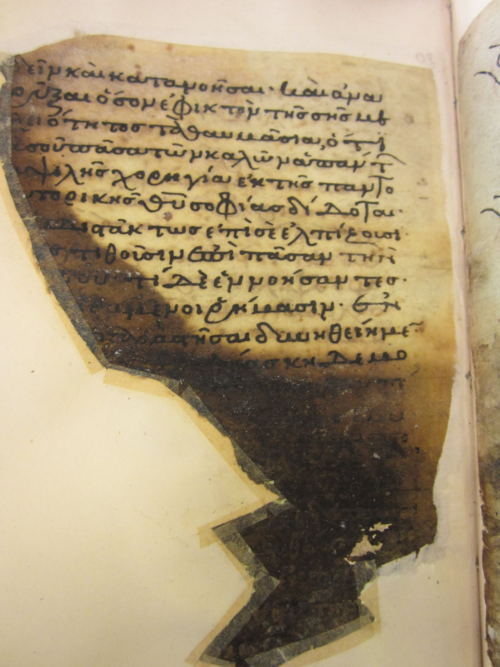 Additional MS 22750. Parchment leaf inlaid in paper. The contrast between the apparently undamaged area and the severely degraded part is very clear, showing the boundary of irreversible changes.

As fire takes hold in a library, a temperature gradient builds across the text-blocks, the centres remaining cooler. This explains the typical pattern of a leaf from a burnt book, the edges shrunken but the centre merely cockled (a response to uneven stresses, like gathering the edges of a piece of fabric). The transition marks the point at which the shrinkage temperature was reached 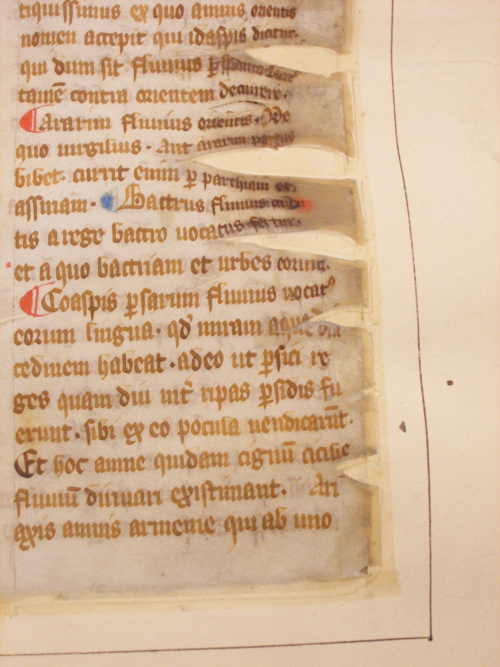 Cotton Tiberius D V. The text suddenly gets smaller, showing that the parchment has shrunk. The cuts were made during early repairs, so that the leaf could be flattened.

At the leaf edges, which are most exposed to heat, the collagen can be denatured to gelatine, becoming hard and brittle and sometimes forming a glassy exudation which seals the text-block. 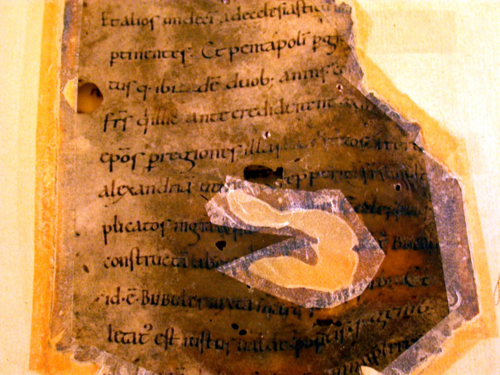 Cotton Otho A XIII. Gelatinised parchment. The strips holding the fragment have caused staining and cover part of the text.

Of course, water was used to extinguish historic fires and this causes further damage to parchment. Too much moisture causes reversion to the memory of being animal skin and, unless it is dried under tension again, the parchment swells and cockles. Many books, undamaged by heat, were air-dried after the fire and show this kind of damage. Those that were not dried quickly enough may also be weakened and stained by mould. 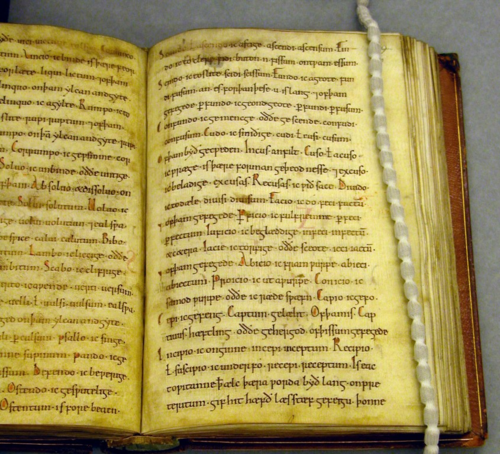 Cotton Julius A II. This manuscript has only slight water damage (and possibly not from the fire), though there are indications that the margins were trimmed before rebinding. This was sometimes a “quick fix” to remove blackened edges where text was not compromised.

Early treatment was simply to soak the parchment in water to make it flexible and then stretch and press it. The heat-contracted edges which would not expand were often slashed between lines of text to allow flattening. Sir Humphry Davy (d. 1829) improved on this by suggesting a mixture of “spirits of wine” (alcohol) and water, and such azeotropic mixtures continued in use till very recently, as they allow a controlled application of moisture to rehydrate dry parchment. However, even this is now thought damaging, and cockled parchment will just be allowed to relax in a slightly humid atmosphere, before pressing. Other experiments to try to make the texts more readable have added to the parchment’s degradation. 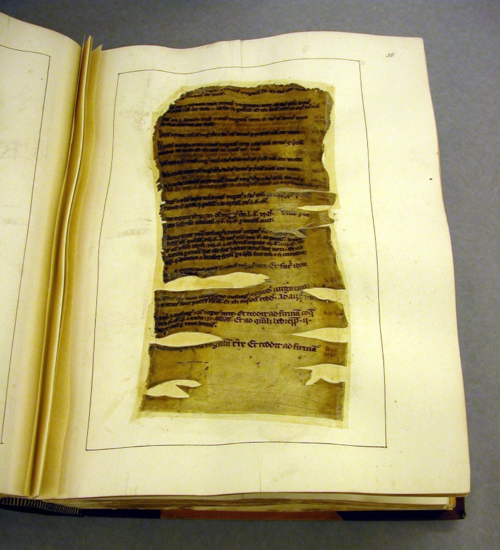 Cotton Tiberius E VI. An extreme example of cutting into a fragment of a Cotton manuscript in order to flatten it so it could be inlaid. It is also possible to see that the paper frame is starting to cockle as stresses readjust in the parchment fragment.

Typical fire damage leaves the text in the centre of the page readable, but the weak edges are easily broken by handling and it is imperative to protect them to prevent fragments becoming detached. It is estimated that the Beowulf text (Cotton Vitellius A XV) lost some 3000 letters before 1817. It and many other manuscripts were eventually treated by inlaying each leaf in paper, but the strips used to secure the parchment themselves covered more text. The adhesive seems to have been paste, which left stains and is now becoming brittle; the paper frames are degrading too, and often cockling under the pull of the parchment. Other early repair techniques used parchment infills, silk gauze or goldbeater’s skin. 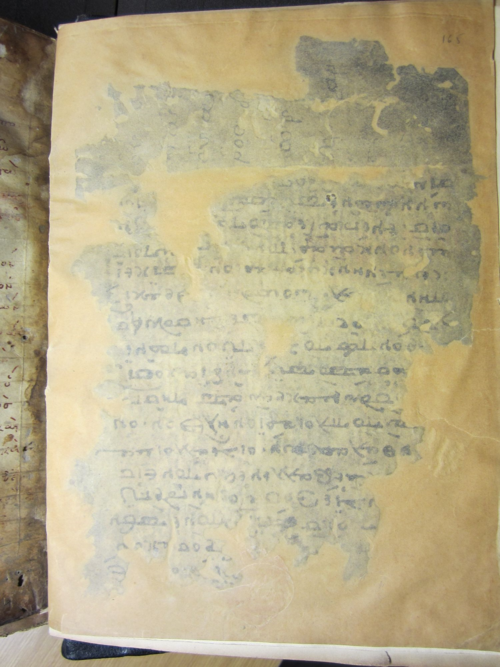 Egerton 2745, f. 165r. Lamination is holding the fragments together and maintaining the relationship of the lines of text, but making it difficult to read. Retreatment is not an option because removing the laminate would cause further damage and the leaf is currently stable.

These methods helped to preserve the fire-damaged manuscripts, but the materials used are now aging. We have become much more cautious when treating parchment since realising that it may be far more degraded than it looks. Moisture can cause gelatinisation; too strong repair materials can pull on and split the weaker skin, adhesives must remain flexible. No wonder that our current emphasis is on sympathetic housing, to slow deterioration and give support to damaged leaves without the dangers of re-treatment. 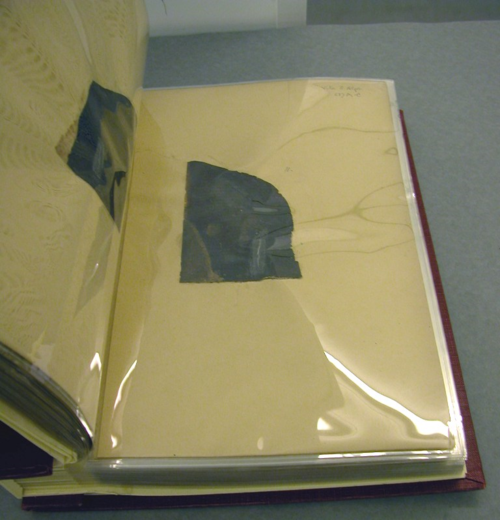 We are fortunate that fire-damaged parchment manuscripts can now be made available to readers through digitisation, avoiding the risks of further handling. Safe in controlled conditions, we are confident that even after heat, water and incautious early treatments, they will long survive.

This is a fascinating piece. A tiny correction: collagen is not 'denatured' to gelatin. Denaturation is what happens at the shrinkage temperature, as the collagen transitions abruptly from elongated fibres to a random coil structure, which is thus shorter. Further heating results in breaks in the backbone of the protein; gelatin consists of these fragments of collagen.

To see what can be done with a burnt manuscript, take a look at the project to reconstruct the Great Parchment Book, also known as "the poppadom book" at http://www.greatparchmentbook.org/