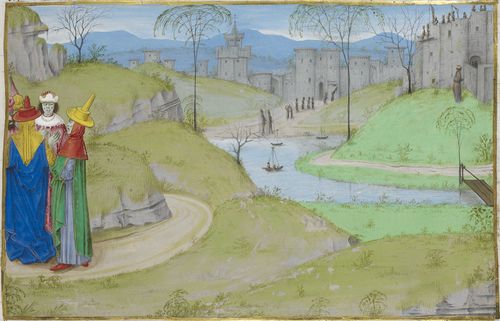 If you hear a knock at your door and open it to find a man in a tall pointy hat and a flowing white beard, 'Aha!' you might say, 'A wizard!'  From Gandalf to Dumbledore, fashion-conscious wizards take their cues from the style icon who embodies the must-have look for necromancers this (and every) season: Merlin.  Nor would the pointy hat have been unfamiliar to medieval audiences as a sign of the wearer's occult power.  Above, the British King Vortigern consults his magicians – mystical headgear clearly in evidence – about a little construction problem he is having. 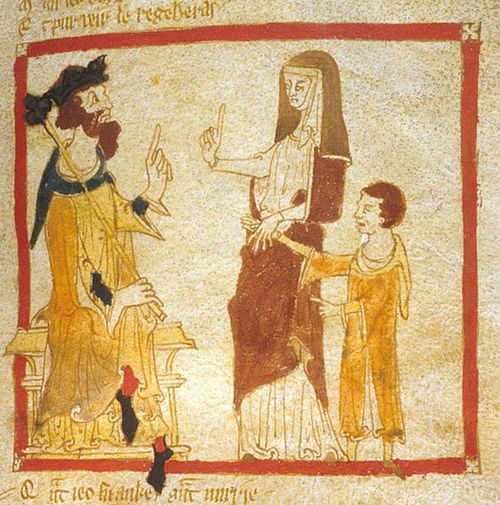 Detail of a miniature of the young Merlin and his mother coming to appear before King Vortigern; from Wace, Roman de Brut (a verse epitome), England, 2nd quarter of the 14th century, Egerton MS 3028, f. 24r

It is one of the most frequently told stories about Merlin: King Vortigern was building a castle, but the structure kept falling down.  When he asked his court astrologers for advice, they offered a grim solution.  The king should mix the castle's mortar with human blood, taken from a boy with no father.  It is at this point that Merlin enters the story.  Despite our expectations of an elderly sage, in medieval texts, Merlin is equally likely to appear in a far different guise.  Merlin himself is the boy with no father, or at least no human father.  He was conceived when his virtuous mother was visited by a devil: the embodiment of supernatural, even diabolical power employed for good. 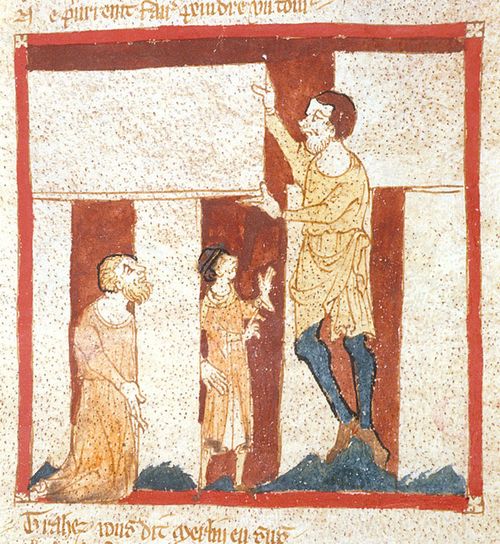 Merlin had a role in another famous construction project as well: the building of Stonehenge, or rather, its transportation from Ireland to Salisbury Plain; detail of a miniature of Merlin, here visually identified with the giants who were said to have originally erected the monument, disassembling the stone circle for transport; from Wace, Roman de Brut (a verse epitome), England, 2nd quarter of the 14th century, Egerton MS 3028, f. 30r

Merlin was brought before Vortigern for his value as building materials, but he soon proved his worth as a magician of greater skill than the older astrologers.  The boy explained that the castle was built above two wrestling dragons, one white and one red.  These creatures represented the Britons and the invading Saxons, whose conflict would eventually bring down Vortigern's rule.   Workers dug beneath the castle's foundations, releasing the dragons, and construction moved forward. 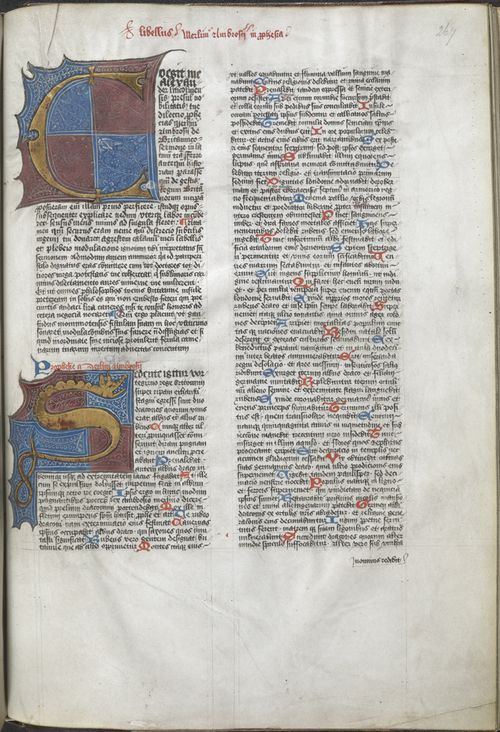 Geoffrey of Monmouth attributed many propehcies to Merlin, with many allegorical beasts, of which the red and white dragons are only the most famous; that the initial 'S'(edente) here takes the form of a dragon is perhaps a deliberate allusion; from Geoffrey of Monmouth, Prophecies of Merlin, England (London), 1490, Arundel MS 66, f. 267r

This is a tale of Merlin's youth, an origin story about his first big success.  But Merlin often adopted a boyish appearance, even in stories about King Arthur, two generations after Vortigern.  Arthur's knights would encounter unlikely, unreliable-seeming people (young boys, elderly beggars) with wild predictions about future events, which they believed only on recognizing Merlin in disguise. 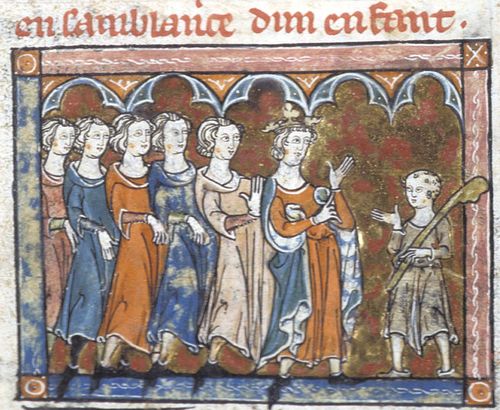 In some stories, Merlin was even a strong warrior.  In his 'Life of Merlin', Geoffrey of Monmouth described the magician as a powerful king who, disenchanted with the horror of war, gave up his kingdom and fled into the forest to play his lyre and alarm people with his uncanny predictions.  Merlin's resentful sister, queen of a neighbouring kingdom, sought to discredit her brother.  She asked Merlin to foretell the deaths of three people.  Merlin predicted a fall, a hanging, and a drowning.  The trick was that all three were in fact the same boy, in disguise.  Merlin was proven correct, however, when the young man died in a freak accident, falling off a cliff, catching his foot in a tree on the way down, and hanging there to drown with his head in the river below.  Merlin, a chameleon himself, could see through another's disguise, and his prophecies were always reliable. 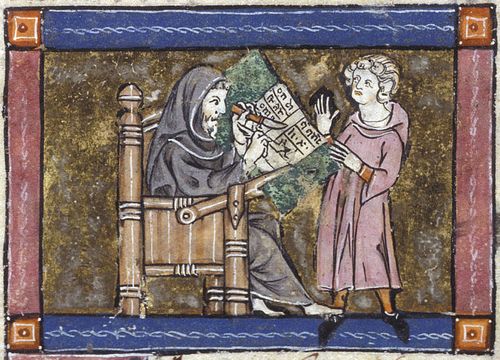 The robed and bearded figure in this image is not the wizard at all, but the clerical scribe Blaise, taking dictation from Merlin (shown here as a handsome young man) as the magician relates his adventures; from L'Estoire de Merlin, France (Saint-Omer or Tournai), c. 1316, Add. MS 10292, f. 163v

Thanks it's most wonderful.