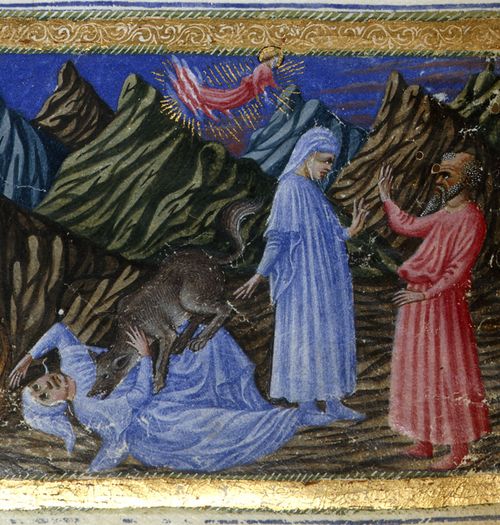 We have already taken a brief look at wolves as gluttonous threats to flocks and the enemies of sheepdogs.  But if wolves represent greed and savagery, they can also be savagery tamed.  When the retainers of the slain King Edmund searched the forest for his severed head, the king's sanctity (and natural dominion over man and beast) was demonstrated when a wild wolf did not desecrate the head, but protected it. 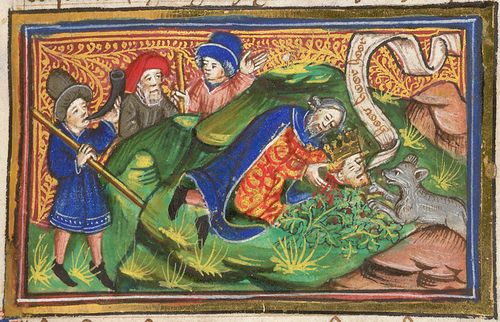 Detail of a miniature of the discovery of the head of St Edmund, guarded by a wolf; the head has called out to the searchers, crying 'Heer, heer, heer!'; from John Lydgate, Life of St Edmund and St Fremund, England (Bury St Edmunds?), 1461-c. 1475, Yates Thompson MS 47, f. 54r

This is not to discount the threat of the wolf, however.  In one of the more bizarre bestiary stories, the reader is warned of the dangers of encountering wolves in the wild.  If you see the wolf before he sees you, you are safe.  But if the wolf catches sight of you unawares, you will be, not attacked, but instead rendered mute.  There is only one cure for this condition.  You must quickly take off all your clothes, throw them on the ground and trample them.  Then you must pick up two stones and bang them together to make a loud noise – only then will your power of speech be restored!  A valuable tip for public speakers struck dumb by stage fright. 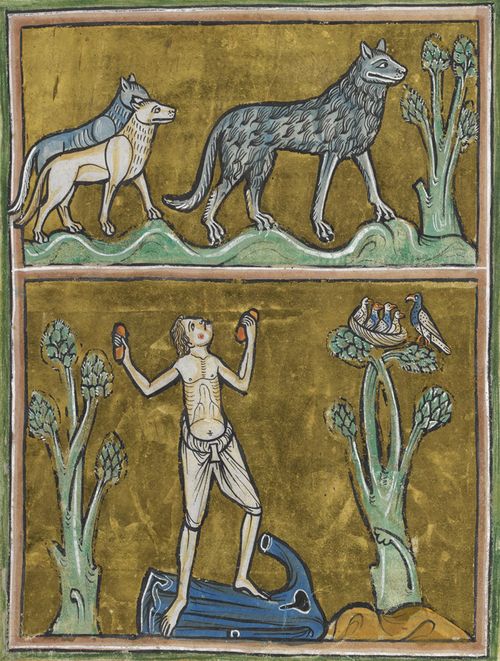 Detail of a miniature of wolves and (below) the man they have struck dumb, effecting his cure by stripping out of his clothes and striking rocks together; from the Rochester Bestiary, England (Rochester?), c. 1230, Royal MS 12 F. xiii, f. 29r

Stripping off clothes seems to be a recurring theme in stories about wolves, and even more in tales about werewolves. There, clothes symbolize civilization, cast aside to take on the appearance as well as the habits of the wolf.  Pliny's Natural History tells of a people who leave their clothes hanging in a tree and transform into wolves.  If, after nine years, they have abstained from eating human flesh, they can return, retrieve their clothes, and become human again. 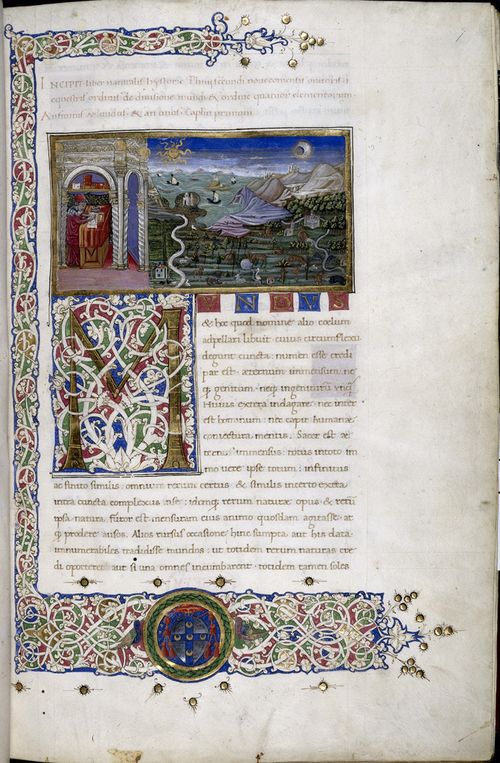 Miniature of Pliny writing in his study, overlooking a vista that comprises the whole of creation, including land, sea and heavens, as well as animals and human habitation; from Pliny the Elder, Historia Naturalis, Italy (Rome), c. 1457-1458, Harley MS 2677, f. 1r

Marie de France tells a similar tale about Bisclavret, a knight with the power to change into a wolf by taking off his clothes.  But his unfaithful wife learned the secret and stole his clothes, trapping him in werewolf form.  While hunting, the king encountered his transformed retainer, who lay down before him and made a show of submission, convincing the king to adopt the loyal animal as a pet.  But when the knight's treacherous lady came to court one day, the usually placid wolf attacked her, biting off her nose.  Only then did the king realized the wolf's identity and give him back his clothes, changing him once more into a human being. 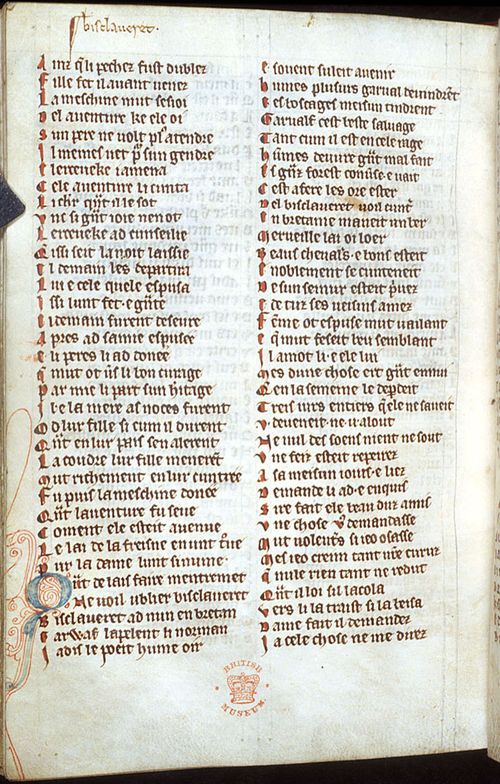 Nor is Bisclavret the only werewolf to show signs of humanity.  An Irish story tells about a priest who became lost on the road and encountered a werewolf.  The wolf spoke to him, asking him to perform last rites for his dying wife (also a werewolf).  The priest complied, and the grateful werewolf then directed him on his way.  Was the priest right, the story wonders, to assume that the soul of a good Christian might reside in the cursed and savage form of a wolf?

The next time you see a wolf, therefore, remember the lessons of the werewolf.  There is only a thin separation between man and beast.  And always remember where you left your trousers! 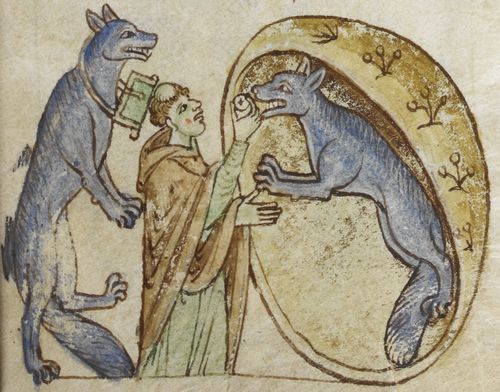 Detail of a miniature of two werewolves: the cursed husband on the left, and the priest administering last rites to the dying wife on the right; from Gerald of Wales, Topographica Hibernica, England (perhaps Lincoln), c. 1196-1223, Royal MS 13 B. viii, f. 18r

Wonderful information... perfect for the next full moon!