The British Library is pleased to be contributing catalogue information from its digital Catalogue of Illuminated Manuscripts to an exciting new project, Manuscripts Online, which has just been launched. 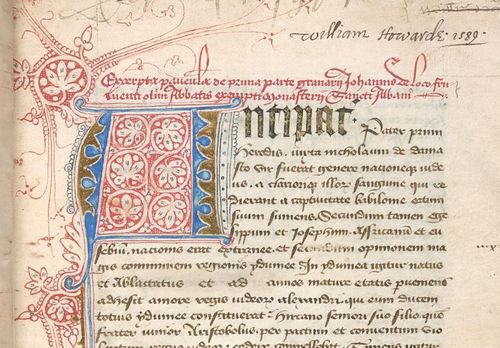 Manuscripts Online seeks to bring to life early primary sources of medieval Britain, by giving online access to written materials from 1000 to 1500 and allowing users to contribute to the collective body of knowledge on the subject. This freely available literary resource has been developed by the University of Sheffield’s Humanities Research Institute (HRI) and has been funded by Jisc, an organisation aiming to make the United Kingdom the most digitally advanced education and research nation in the world.

Michael Pidd, Project Lead and Digital Manager at the HRI, explains the rationale behind the project: "The crowd sourcing aspect of Manuscripts Online gives people an opportunity to share their understanding of the manuscripts so that they can learn from one another. It allows collaboration in a way that hasn’t been possible in the past and we hope it will build up a central geographical view of people’s interpretation of the information which can be used by others in the future."

Users are able to search the resources by keyword, but also by specific keyword types, such as person and place name, date and language. For example, if you search the word "York", and include all possible variations in its spelling, it will produce around 4,000 results and tell you how this word is spelled and used in medieval records.

Other primary resources in Manuscripts Online include:

Posted by Ancient, Medieval, and Early Modern Manuscripts at 10:57 AM