Royal MS 1 A XIV, known as the Wessex Gospels, is a small book of the 12th century containing a translation of the four gospels into the West Saxon dialect of Old English. It is written in what has been described as a ‘rough, untidy’ hand by the famous Anglo-Saxon paleographer, Neil Ker (d. 1982), and has very little decoration. At the beginning of each Gospel is an initial in red or green with rough decoration in the contrasting colour, and two-line initials mark new chapters.

This English version of the Gospels is the earliest translation into the English vernacular, apart from the glosses in Latin gospel books such as the Lindisfarne Gospels, and it survives in 8 copies from this period. Royal 1 A XIV must have been copied directly or indirectly from a manuscript in the Bodleian library at Oxford, Bodley MS 441, as the same passages have been omitted from both. 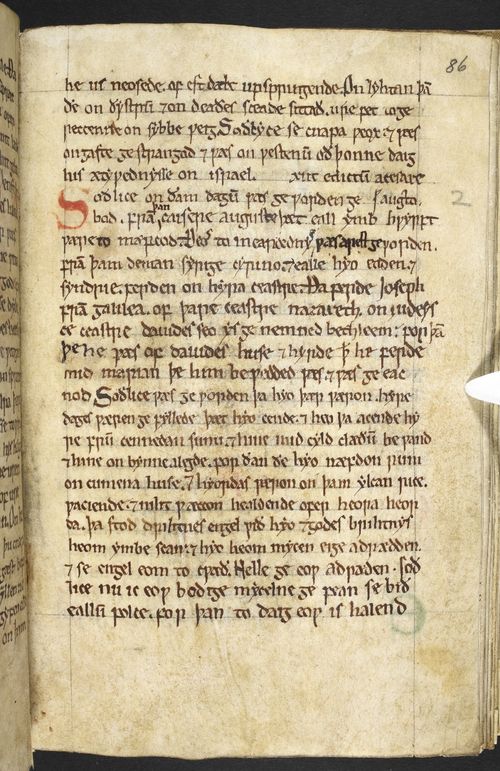 According to Walter Skeat (d. 1912), the great Old English scholar of the 19th century, this book ‘gives the impression of having been written in troublous times, when the object was rather to have a copy for ready use than to spend time in elaborating it’. Based on this impression, he suggests that Royal 1 A XIV may have been copied during the troubled reign of King Stephen (1135-1154), though there is no evidence for this assertion. It is certainly a workaday version of the Gospels and has been well-used, judging from the well-worn edges. There are frequent corrections and additions, as seen in the page above (f. 86r) where the word þan has been inserted above line 7, and on the following line where the darker ink shows two erasures and corrections by the scribe. 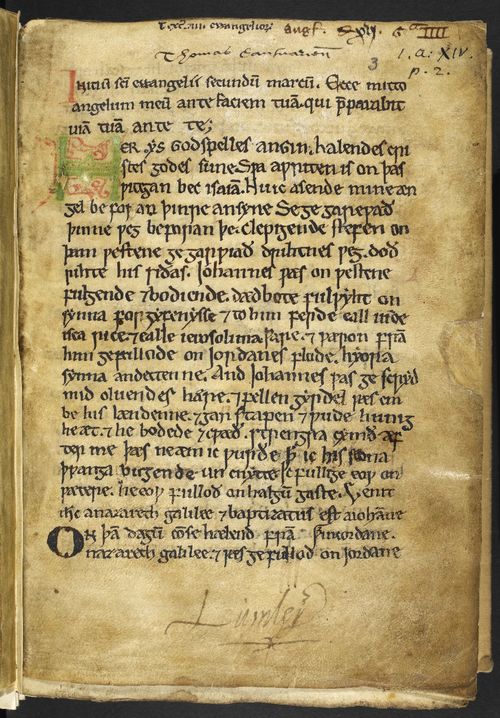 The first page of this manuscript provides many clues about its history. At the top is the pressmark of the Benedictine cathedral priory at Christ Church, Canterbury, ‘D[istinctio] xvi Gra[dus] iiii’, so it was in the medieval library of the abbey, and was copied either there or in the area as it contains some Kentish spellings (for example ‘gefeyld’ for ‘gefyld’ fulfilled). The title written at the top of the page, ‘Text[us] iv evangelior[um] anglice’, is reproduced in the 14th-century catalogue of the Christ Church library, but at the Reformation this book was one of many acquired from religious houses by Thomas Cranmer, archbishop of Canterbury (d. 1556), whose name is written at the top of the page.

The Wessex Gospels next came into the hands of a noted collector of manuscripts, John Lumley (d. 1609) (his name is inscribed in the lower margin), who was involved in a conspiracy with Mary Queen of Scots, known as the Ridolfi Plot. Lumley forfeited his ancestral home and in unknown circumstances his collection of manuscripts passed to Henry Frederick, the eldest son of James I (d. 1612). The dashing, popular Prince of Wales was also a collector of art and books, and when he died at only 18 his manuscript collection became part of the Royal library. Now housed at the British Library, the Wessex Gospels has been fully digitised so that every page is accessible to view in detail on our Digitised Manuscripts site.