With apologies for the tortured reference to our previous post on medieval owls!  Regular readers will know that this blog has an ongoing series about animals in medieval manuscripts; our menagerie so far has included dogs, cats, beavers, hedgehogs, elephants, and more.  To shake things up in time for the weekend, let us turn our attention to an animal that you might not recognise as readily as you would a Lolcat or Mrs Tiggy-Winkle -- the caladrius bird. 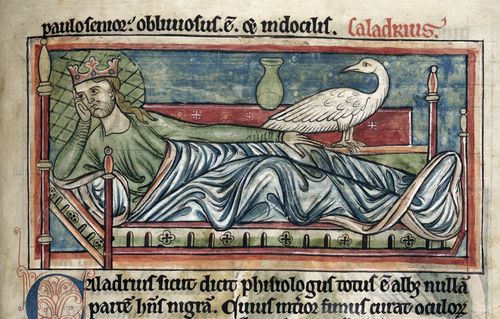 Detail of a miniature of a caladrius perched on the bed of a king, from a bestiary, with extracts from Giraldus Cambrensis on Irish birds, England (Salisbury?), 2nd quarter of the 13th century, Harley MS 4751, f. 40r

Although they are little-known today, caladrius birds were common features in medieval bestiaries.  The caladrius, we are told in the bestiary text, makes its home in the courts of kings, and is pure white 'like the swan'. The dung of the caladrius was believed to cure blindness, but this remedy was rather a mixed blessing since it required the direct application of guano in the eyes of the afflicted.  But the real value of the caladrius was in its infallible prognostic abilities.  If it was brought into a sickroom and turned away from the man or woman within, that person would surely die.  If, however, the caladrius kept his gaze on the ill person and 'directed itself towards his face' (sometimes this is depicted quite literally; see below), it was a different story.  After staring down the sick man or woman, the caladrius would fly into the air, taking the illness with it, and the patient was destined to make a full recovery. 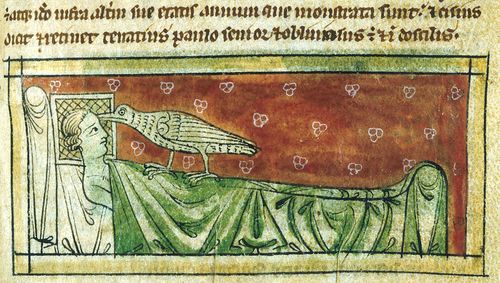 Detail of a miniature of a rather alarming caladrius on the sickbed of a man who will be cured, from a bestiary, England, 2nd or 3rd quarter of the 13th century, Sloane MS 3544, f. 24r

Outside of manuscripts, only two medieval depictions of the caladrius survive: on a much-worn piece of 12th century sculpture adorning the village church of St Mary's at Alne, near York in England, and in a panel of a 13th century stained-glass window on the cathedral of Saint-Jean-Baptiste in Lyon, France. But knowledge of the caladrius bird's amazing abilities must have been fairly widespread, as they can be found depicted in a number of manuscript miniatures without any explanatory text.  A black version of the caladrius, for example, is shown in a French Bible miniature in the act of curing the prophet Tobias. 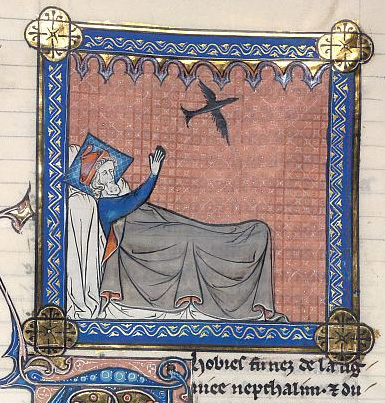 Detail of a miniature of Tobias in bed, stretching out his hands towards a flying black caladrius bird, at the beginning of Tobit, from a Bible (imperfect), France (Paris), last quarter of the 13th century, Harley MS 616, f. 259r

And an interesting double act can be found in the bas-de-pages of facing folios in the Queen Mary Psalter. 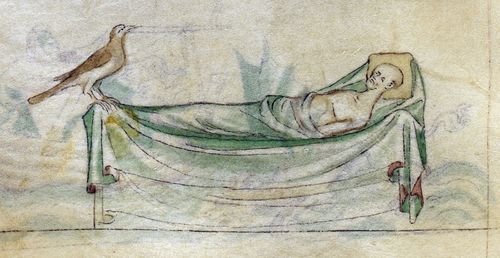 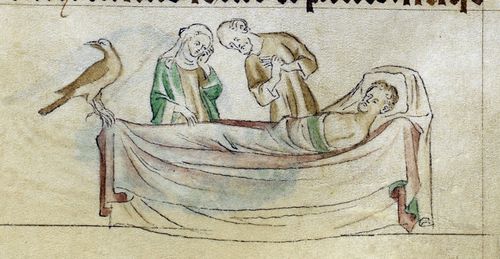 First the good news, then the bad… detail of a bas-de-page miniature of a caladrius bird indicating that a sick man will get well, and a detail of relations mourning at the bed of a man who will die, from the Queen Mary Psalter, England (London or East Anglia?), between 1310 and 1320, Royal MS 2 B VII, ff. 89v-90r

Caladrius birds also make an appearance in the medieval histories of Alexander the Great, where they are included amongst the marvels Alexander encounters during his travels in the east. Unlike the pure white bestiary-caladrius, those in Alexander manuscripts are often depicted with tan or yellowish feathers (see below). 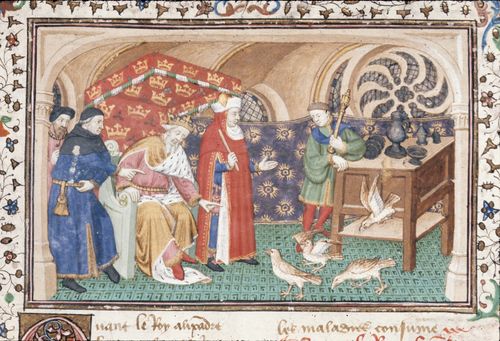 It is possible that this tawny version of the caladrius might be a reference to much older sources.  The Roman scholar Pliny the Elder (AD 23-79) names it as the 'icterus' because of its colour.  Probably not coincidentally, he also mentions its particular skill at curing those afflicted with jaundice ('ictericus'); one of the unpleasant symptoms of that disease is, of course, yellowing of the skin.  Classical scholars often referred to jaundice as the 'morbus regius' ('royal disease') because it was believed that the touch of a king could cure it, and this early association might explain why caladrius birds are so often shown with royalty and inside regal settings. 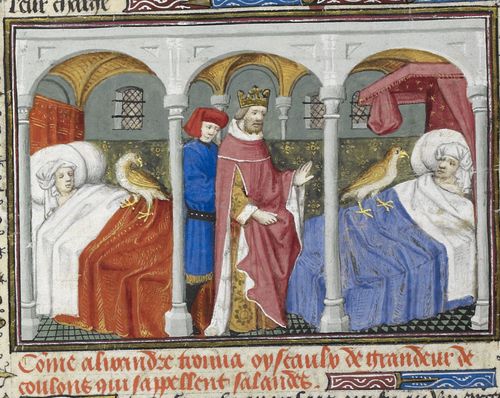 It is difficult to find many references to the caladrius after the 15th century, but this amazing avian has experienced a very minor renaissance in recent decades.  The obvious associations with diagnosis and healing make it an ideal symbol for medicine, and the caladrius has been included in coats of arms recently granted to the Medical University of South Africa, the South African Medical and Dental Council, and the Isle of Wight Health Authority.  Perhaps most charmingly, a caladrius bird featured in a 1978 'Theodoric of York, Medieval Barber' sketch on the programme Saturday Night Live, during which the barber/doctor Theodoric (played by the incomparable Steve Martin) tries to use the bird (played by an uncooperative live dove) to diagnose an ultimately-doomed patient.

Thanks for yet another brilliant and informative post! I've been fascinated with this bird ever since I came across it in books a few years back.

I was particularly interested to read about the morbus regius, as this is appears almost as a precursor of scrofula as the king's evil. This is something I've come across fairly often in my research on Edward the Confessor. Could I trouble you for the references to the classical scholars using this term?

subject: not-a-caladrius. The miniature of 'Tobias' depicts, in fact, his father Tobit, who was sleeping outdoors when a swallow (depicted here incorrectly as a swift, with a forked tail) shat in his eye, blinding him. His son Tobias ultimately cures him.