What Can We Learn from a Scribal Colophon? 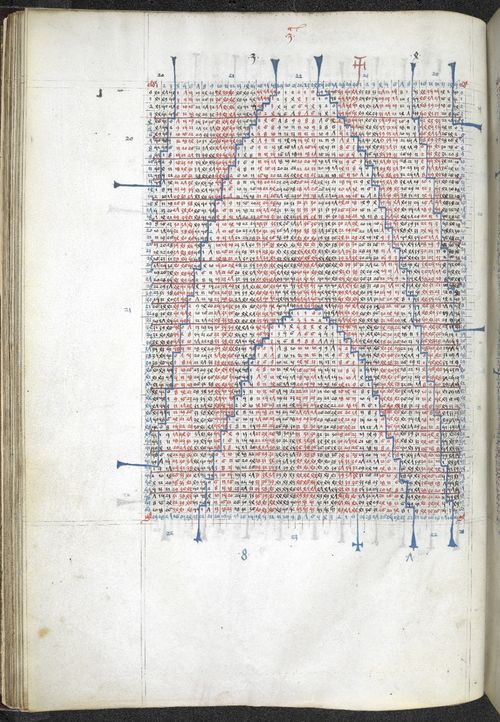 Arundel MS 66 is a massive manuscript containing a highly sophisticated collection of astronomical and astrological works.  It combines texts on judicial astrology and geomancy with astronomical tables, which were necessary tools to calculate the movements of the planets and stars. As a comprehensive guide to techniques of forecasting the future, it also contains an interesting selection of English political prophecies.

Although its early provenance is untraceable, it has long been suggested that Henry VII was the original patron or recipient of the codex, based largely on the royal portrait and arms included in a miniature on f. 201r (see below), as well as several heraldic badges incorporated in borders, initials and miniatures throughout the text. 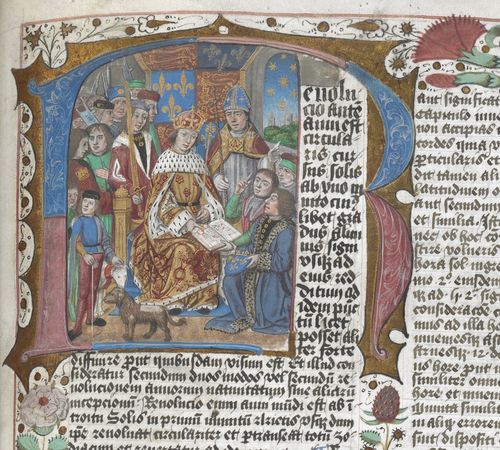 Detail of a miniature of Henry VII, surrounded by his courtiers, overseeing an astrologer making a prediction for the forthcoming year, at the beginning of a treatise on the Revolution of the year of the world, from a compilation of astrology and prophecy, England (London?), 1490, Arundel MS 66, f. 201r

Amongst the elements that can be tied to Henry VII and his family is the friendly Red Dragon of Cadwaladr, painted against the Tudor livery colours of white and green; you may remember this miniature from the opening displayed during the Royal Exhibition. This stand-out Red Dragon was used in Arundel MS 66 in the place of the more usual image of the constellation Draco, in a section containing Ptolemy's 'Catalogue of Stars'. 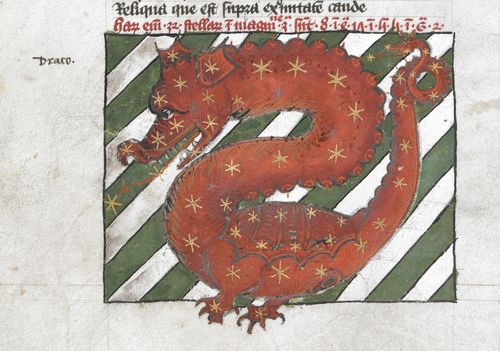 Detail of the constellation Draco, at the beginning of Ptolemy's Catalogue of Stars, from a compilation of astrology and prophecy, England (London?), 1490, Arundel MS 66, f. 33r

The main text in this manuscript is the Decem tractatus astronomiae (or Liber Astronomiae), a popular handbook of astrology composed by the famous Italian astrologer Guido Bonatti of Forli (1207-1296). An otherwise blank leaf at the end of this text bears a note by the scribe, John Wellys, which may give some insight into the production of the book.

This book by Guido Bonacti of Forlì was finished in the year of Christ 1490, on the 30th day of June, 12 hours and 24 minutes, compiled and brought up-to-date by me John Wellys in the 4th year of K[ing] H[enry] vii and in the 5th year of the holy pontificate in Christ of our father pope Innocent IV [sic for VIII].

Whether John Wellys was a trained astrologer or not, he dated the terminus of his work with an extraordinary precision which reminds one of the language often used in astrological charts. Another good example can be found in Egerton MS 889, which describes the birth date of Henry VI in a similarly detailed way:  'Nativitas Henrici sexti anno Christi imperfecto 1421°, 5a die Decembris post meridiem, 3 horam 20m 56s, die Veneris, hora Saturni (Nativity of Henry VI in the imperfect year of Christ 1421, 5th day of December, in the afternoon, at 3 hours 20 minutes and 56 seconds, on the day of Venus, in the hour of Saturn). 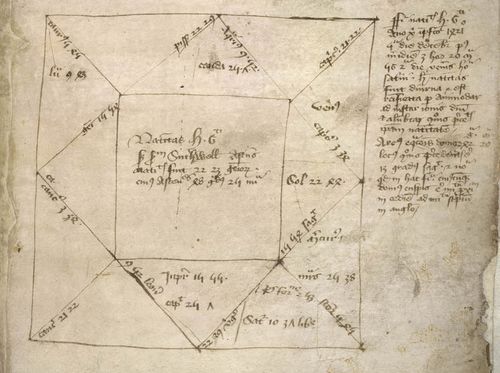 Diagram of the horoscope for the birth of Henry VI, from an astronomical and astrological compendium (the 'Codex Holbrookensis'), England (Cambridge), between c. 1420 and 1437, Egerton MS 889, f. 5r

In his note in Arundel MS 66, Wellys also scrupulously calculated the regnal years of Henry VII and Innocent VIII. Both the king and the pope came into power in August, in 1485 (22 August) and 1484 (29 August), respectively. Arundel MS 66 was completed in June of 1490, therefore in the fourth year of Henry's reign and the fifth year of Innocent's pontificate.

John Wellys's inscription, jotted down on a blank leaf, appears to be more an informal note than an polished colophon. What, then, was its purpose, and what does this note tell us about the scribe's work? The way Wellys used verbs is somewhat striking. He preferred to describe his activity as 'componere' (to put together or arrange) rather than the more commonly used 'scribere' (to write), implying that his task involved a work of compilation. He also stressed the fact that he brought the text up to date ('renovatus'). Indeed, a closer look at Wellys's rendering of Bonatti's Liber astronomiae shows a great deal of editorial work. The scribe introduced his own division of the text into not six but seven parts and therefore had to alter Bonatti's preface. In the Tractatus de Electionibus, one of the tracts forming the Liber astronimiae, his ingenuity went even further. Wellys was clearly transcribing his text from an imperfect model. The Tractatus in question contains several gaps and an imperfect beginning. 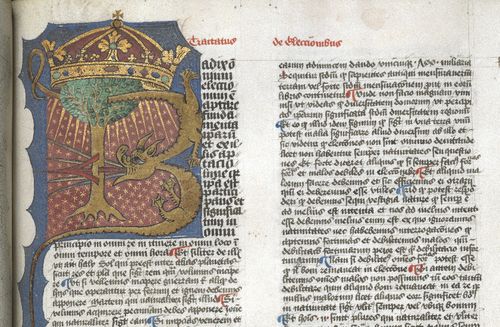 Detail of the imperfect beginning of Tractatus de Electionibus, with a miniature of Henry VII’s badge of a crowned tree, from a compilation of astrology and prophecy, England (London?), 1490, Arundel MS 66, f. 129r

Wellys did not bother with the two chapters missing at the beginning of the tract, instead simply electing to open with chapter 3. However, a large portion missing at the end seems to have caught his attention. By this point in his labours he was working on royal commission, which may have had something to do with his diligence! Not having another copy of Bonatti's book at hand, Wellys decided to find the missing text elsewhere. On ff. 143v-147v, he seamlessly replaced Bonatti's text on elections with an extract from a similar work, De iudiciis astrorum (On the judgements of the stars) by the Arabic author Haly ibn Ragel. Did King Henry ever notice the difference? 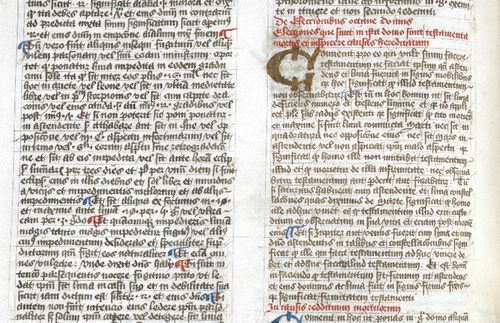 Detail of the incipit of Haly ibn Ragel's De iudiciis astrorum interpolated into Guido Bonatti's Tractatus de Electionibus, with the change of ink colour marking the beginning of the interpolation, from a compilation of astrology and prophecy, England (London?), 1490, Arundel MS 66, f. 143v

To cover up his textual replacement, Wellys provided an inaccurate rubric at the end of the interpolated passage, which reads, 'expliciunt electiones libri Guidonis' (here ends the elections of Guido's book). 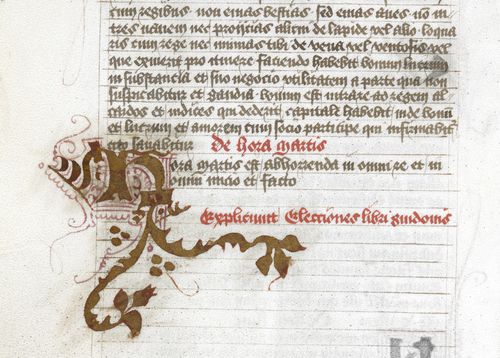 Wellys copied part of the replacement text in an added quire, in a different colour of ink from the rest of the manuscript. He used the same light brown ink to supply the last two rubrics of the Tractatus de ymbribus et aeris, the last tract of Bonatti's book (f. 248r), possibly during the same campaign of revisions.  If not for his unusually worded colophon-note, I would have never discovered John Wellys's trick!

This post is based on my forthcoming article 'The Royal Image and Diplomacy: Henry VII’s Book of Astrology (British Library, Arundel MS 66)' in the Electronic British Library Journal.

great post!
however, it's "pontificatus sanctissimi [not: sanctissimus] in Christo patris" - "of the pontificate of our (most) holy father in Christ".

Dear Thomas,
Thank you very much for your comment above; I have consulted with my colleague who prepared the entry and have corrected the post accordingly. Much appreciated, Sarah J Biggs

you're very welcome!
the translation should also be amended, though (cf. my first post) - i hope you'll forgive my quibbling...
even if theoretically "sanctissimi" might refer to "pontificatus", in this case it's "sanctissimi [...] patris" (the pope's style), and therefore: "in the 5th year of the pontificate of our (most) holy father in Christ pope Innocent".