One of the most charismatic manuscripts in the British Library's collections is the so-called "Golf Book". This Book of Hours was made at Bruges around the year 1540, and is so named because on one page (the calendar for September) it contains a depiction of a game resembling golf. 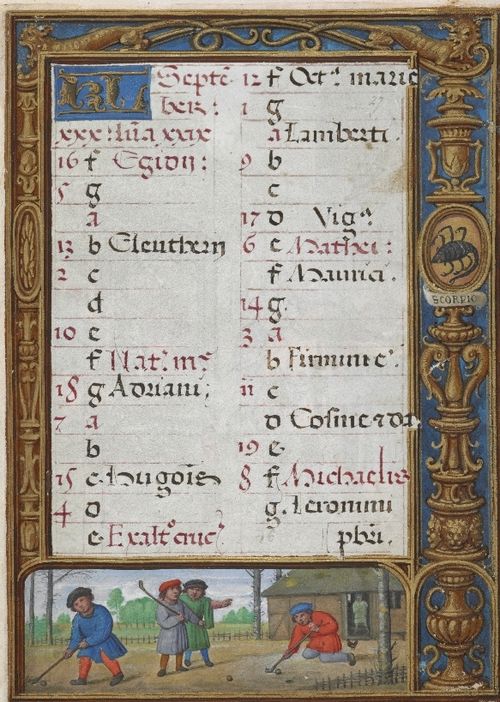 A miniature of four men playing a game resembling golf, at the bottom of the calendar page for September (London, British Library, MS Additional 24098, f. 27r).

Of course, golf is not to everyone's taste. Mark Twain is accredited with describing the game as "a good walk spoiled"; and, like many sports, it's arguably better fun to play than to watch, notwithstanding the fact that golf is to be introduced to the summer Olympics at Rio 2016. But just what is the game being played below?

At first sight, we can certainly deduce that this game does resemble golf, even down to the cloth caps that some of the competitors are wearing (see the image below). We can clearly see in our miniature three balls, with three of the competitors holding curled sticks, reminiscent of modern golf clubs. One man, wearing a green cloak, is gesticulating to his companion, and may be what we might call a "caddie"; and another is standing at the door of the adjacent building (the "nineteenth hole"). But surely the stance of the player on the right, in the orange-red jerkin, is all wrong. Modern golfers play the game on their feet, rather than on their knees, both to get a better purchase on the ball and for better balance. We think that the current-day authorities would view this player's technique very dimly. Maybe this stance would be outlawed in the same way that the anchoring of putters (don't ask) is to be banned from 2016. Less a good walk spoiled than a good crawl spoiled. 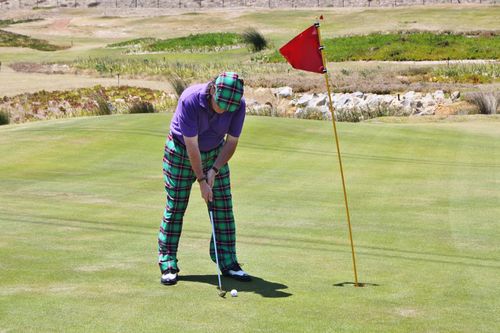 You can view the whole of the magnificent Golf Book on our Digitised Manuscripts site. And don't forget to follow us on Twitter, @blmedieval.

Oh, thank you - I had quite forgotten about this illumination. Sitting here - with a broken leg - and feeling sorry for myself, whenever my husband skips the garden to hurry down to the course, I have nothing better to do but link to a great museum
http://www.britishgolfmuseum.co.uk/collections/origins-of-golf where the early story is told about the "greatest game ever played"