Of Captions, Clerics, and Queens: Tweeting the Medieval Illuminated Manuscript

And now for something a bit different: a guest post from one of our most faithful Twitter correspondents, Robert Miller (many thanks, Robert!).

From LOLcats to the seductive Hey-Girl-I-Like-the-Library-Too musings of Ryan Gosling, the internet was made for captioning: slapping a surprising phrase on an unsuspecting image in the service of humour and hipsterish irony.

It was only a matter of time before captions were used to retrofit medieval art for the social media age.  With the help of Photoshop, Star Wars fans have creatively rewoven the Bayeux Tapestry.  And then there is Dutch medieval scholar Erik Kwakkel, the (decidedly youthful) father of illuminated manuscript captioning.  Erik works to popularise manuscript studies with a heady mix of tweeting, blogging, and tumblring, in both serious and LOL modes: his captions typically evoke a delightful dissonance between a centuries-old image and our modern sensibilities.

My first attempt at Kwakkelian captioning on Twitter was my most successful, if one measures success by the number of retweets one gets (and what else matters, these days, but to tweet and be retweeted in turn?): 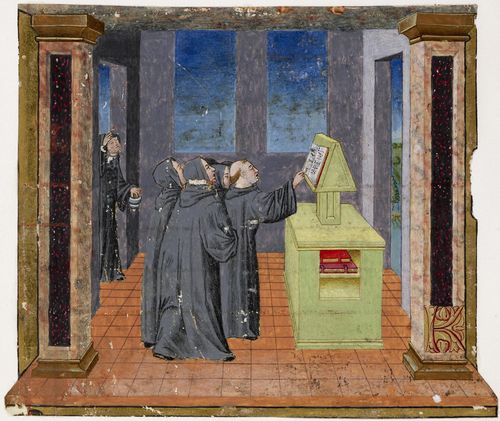 I've been inspired to caption for a few reasons:  an amateur's love of medieval illuminated manuscripts, the vibrant, welcoming community of medievalists on Twitter (Damien Kempf, Sarah Peverley, Kathleen McCallum, and Shamma Boyarin, to name just a few); and the British Library's farsighted decision to make its medieval images free of copyright restrictions, meaning manuscript geeks like myself can caption, post, and play with the Library's image-hoard to their hearts' content.

Sharing captioned illuminations on Twitter is a great way to spark scholarly discussion, and I have learned much from tweeters and bloggers such as Steffen Hope and A Clerk of Oxford.  Of course, given the impish nature of many captions, the online conversation is not always entirely serious.  The following image, for example, gave rise to a debate between tweeting medievalists (Sarah J Biggs among them) as to the 14th-century origins of designer handbags: 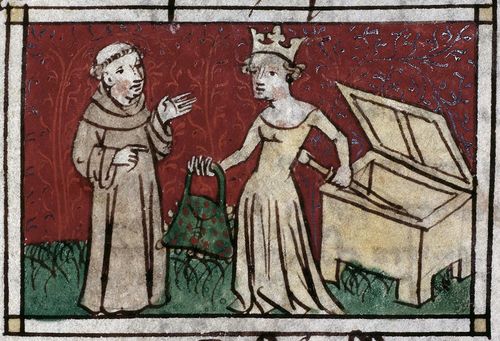 Undoubtedly the best captions, like the best lyric poems, write themselves: 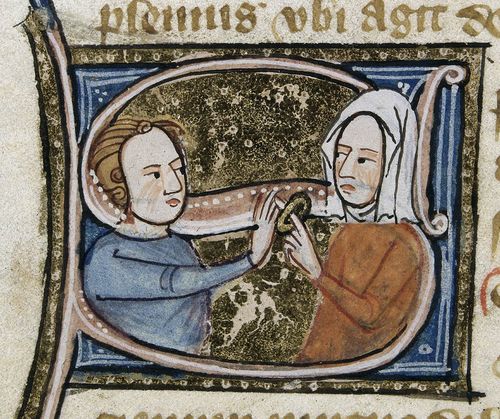 Other captions heighten the drama of crucial moments in a manuscript's narrative: 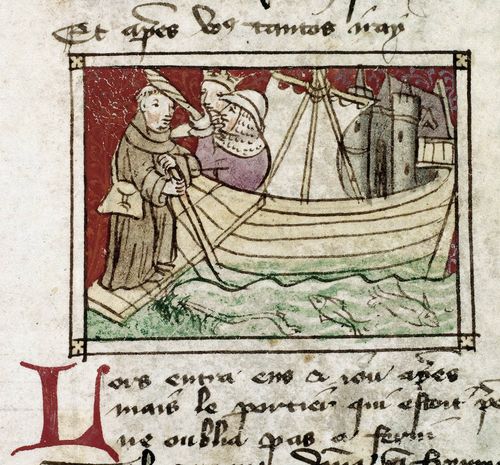 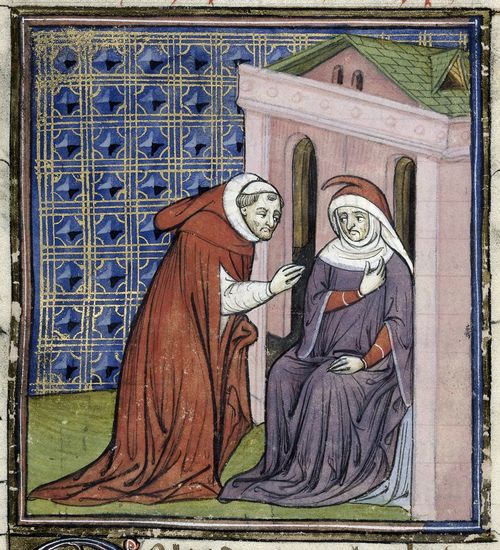 An academic librarian in the United States, Robert Miller dreams of a full-time position as a medieval anchorite (with paid vacations).  You can follow his tweets @robmmiller.

And of course, you can follow us at @blmedieval.