The Elephant at the Tower

The art of giving diplomatic gifts is an age-old tradition, practised by kings and queens, popes and emperors, presidents and prime ministers. But what to give? 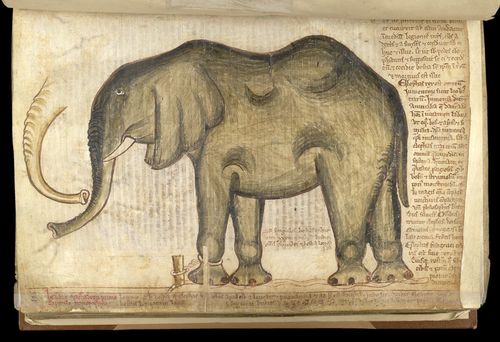 That very question must have dawned on King Louis IX of France (reigned 1226-1270), when he was seeking a gift for Henry III of England (reigned 1216-1272) in 1255. How to impress the English king, and in the process give him something that he did not already have? The exchange was recorded by Matthew Paris, the chronicler of St Albans: "About this time, an elephant was sent to England by the French king as a present to the king of the English. We believe that this was the only elephant ever seen in England, or even in the countries this side of the Alps; thus people flocked together to see the novel sight."

Paris wrote a short tract on the elephant, found in the Chronica maiora (Cambridge, Corpus Christi, MS 16). He had evidently seen the elephant for himself, and described its principal features, based on observation and deduction. The elephant was 10 years old (how to tell?), 10 feet high, grey-ish black with a tough hide, and used its trunk to obtain food and drink. It lived in a specially-constructed house at the Tower of London, 40 feet long by 20 feet wide, and its keeper was named Henry de Flor.

The image above is one of two of Henry III's elephant drawn by Matthew Paris, and is found in his Liber Additamentorum or Book of Additional Things (British Library MS Cotton Nero D I). Suzanne Lewis, author of The Art of Matthew Paris, suggests that this is Matthew's first attempt to draw the elephant, in part since it includes a second rendering of the trunk in a different position. As Lewis observes, the elephant is here "drawn horizonatally on the page in heavy brown line and tinted with similar dark grey and ochre washes ... the details of the skin folds on the trunk and rear flanks, as well as the flap covering the upper part of the tusk, are more freshly observed and convincing that those in MS 16." The assumption would seem to be that the elephant in the Liber Additamentorum was drawn from life, with the illustration in the Chronica maiora being based on the earlier drawing, perhaps with other sketches which have not survived.

Lewis also points out that both drawings of the elephant show that it had knee joints, contrary to the widespread medieval belief that the elephants' knees were joint-less! You can read more about this phenomenon in our post Elephants on Parade.

For more about Matthew Paris and Henry III's elephant, see Suzanne Lewis, The Art of Matthew Paris in the Chronica Majora (Aldershot: Scolar, 1987), pp. 212-16. There is a great blogpost by our friends at Corpus Christi College, Matthew Paris and the Elephant at the Tower, and you can access images from the famous Parker library here (subscription only).

The drawing is remarkable, because as well as the attempt to render this extraordinary beast, you can really imagine the grot of its surroundings from how miserable it looks chained up.

Of course it is a little known fact Henry III's elephant was knighted, and left the Tower to live out his days in a castle on a roundabout in south London.

The elephant was transported by ship to the port of Sandwich (a major sea port and centre of sea fishing at that time), then it was made to walk to London. Some time in August 1255 it was seen passing through the village of Wingham, between Sandwich and Canterbury, and this must have caused quite a stir among the rural population - something akin to having Martians land in the High Street. It arrived at the Tower of London around Michaelmas, 1255 and it survived until the following February. The cost of its food and keeper during this period is recorded as £16 13s 1d, an enormous amount of money in the 13th century, but there is no record of exactly what food or drink was provided.