With all of the excitement surrounding the impending arrival of Britain's newest Royal baby, it seems like a good opportunity to have a look at the medieval representations of birth - that blessed, everyday event. 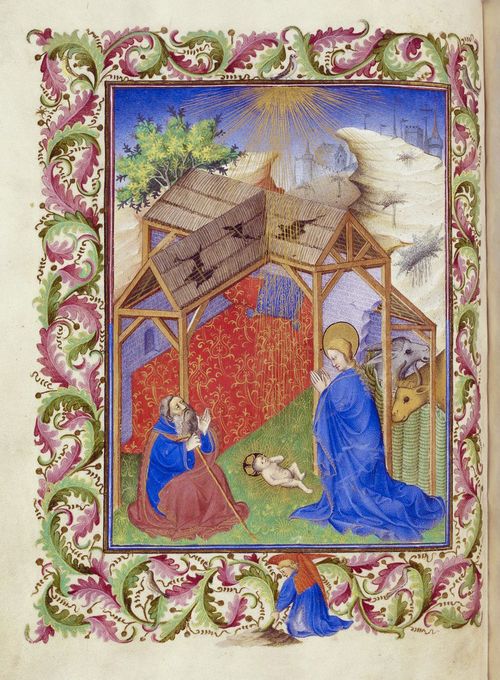 The most frequently depicted newborn in medieval art is, of course, the infant Christ, who is usually shown in the manger, surrounded by the Virgin Mary, Joseph, a curious ox and ass, and occasionally choirs of angels (see above and below).  One imagines that the future king or queen of England will be born in a cozier setting, although perhaps with slightly less celestial fanfare. 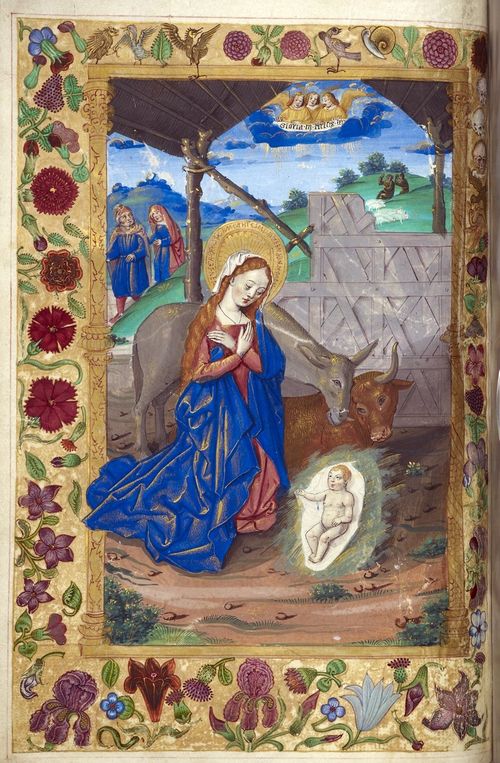 The births of saints and kings were also a popular subject for medieval illuminators.  The miniature of the birth of Alexander the Great below is a typical example, albeit one in a particularly luxurious setting. 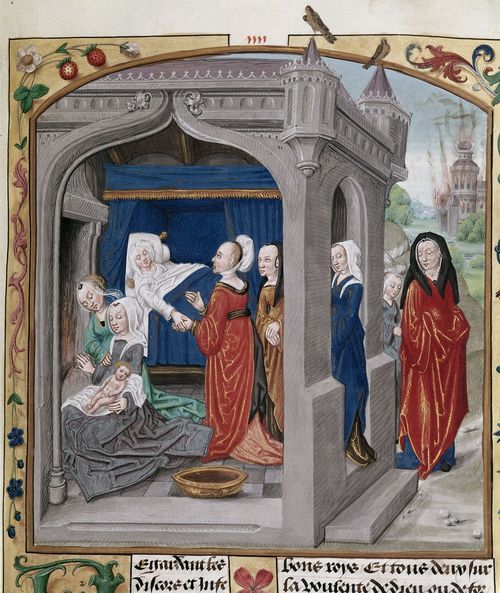 An image of another well-appointed birthing suite can be found in Harley MS 2278, a manuscript containing Lydgate's lives of SS Edmund and Fremund.  In the miniature on f. 13v (below), the new mother is being attended by a group of ladies, while another looks after the newborn, complete with tiny halo, before a roaring fire. 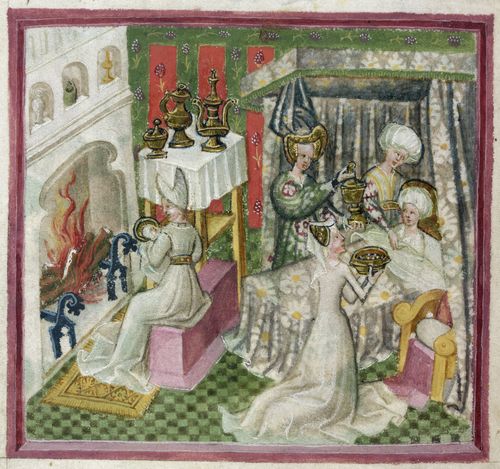 The 14th century Queen Mary Psalter was most likely produced for a royal woman, and includes quite a few bas-de-page paintings of nativities (with a small ‘n’).  A particularly charming example is that of St Nicholas, who can be seen lying swaddled in his cot, watched over by his tired mother and a busy servant. 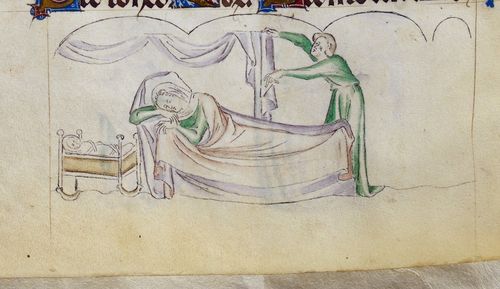 These scenes are overwhelmingly female ones, populated almost entirely by women (and of course their babies).  Men, when they are present, are most often onlookers, claiming an active role only when medical intervention seems to have been necessary.  The most common depiction of this type of exigency is with the birth of Julius Caesar, who according to legend, had to be cut from his mother’s womb (hence our current term ‘caesarian’).  This operation has been captured in medias res in Royal MS 16 G VIII, where the future emperor can be seen emerging from his otherwise fully-dressed mother, surrounded by medical men.  Caesar’s mother seems relatively calm in this miniature, but is slightly less so in another Royal manuscript, which shows us the immediate aftermath (both below). 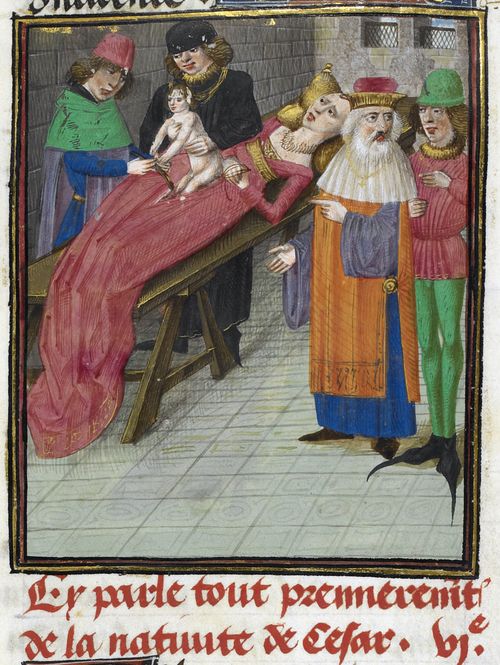 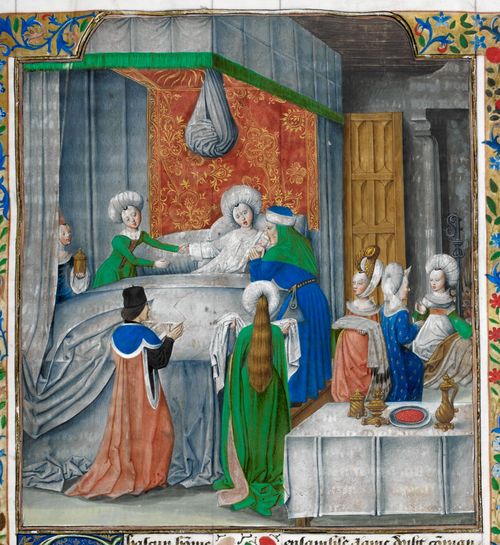 Not all the medieval depictions of childbirth and infancy fit into these familiar patterns, however.  A copy of the Roman de la Rose dating from c. 1490 – c. 1500 includes a miniature of the personification of Nature literally forging a baby, hammering his shape on an anvil while discarded attempts lie on the floor nearby. 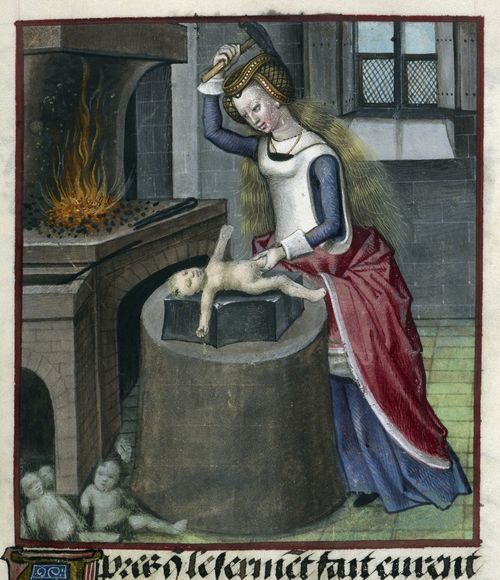 A bas-de-page scene in the Smithfield Decretals (above) shows a rather unusual caretaker for a newborn; illustrating a popular legend, a series of marginal miniatures show a lion suckling and tending to a baby.  And Boccaccio’s De claris mulieribus includes a well-known episode in the (almost certainly apocryphal) life of Pope Joan, who was said to have masqueraded so successfully as a male pontiff that her true gender was only revealed when she gave birth in the middle of a religious procession (below). 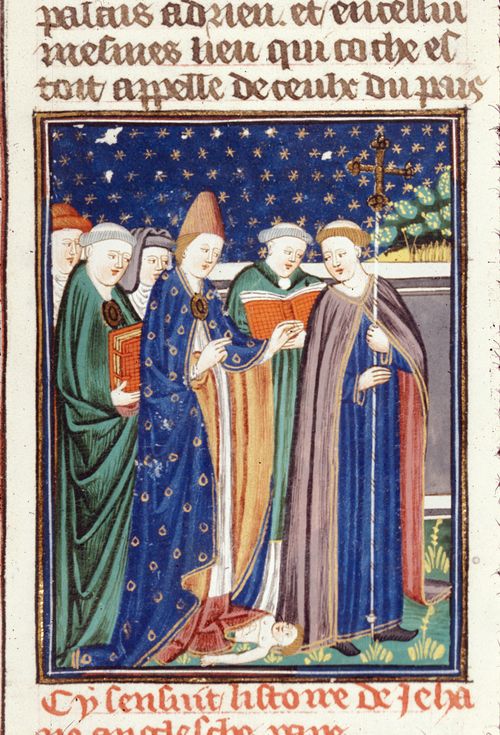 By and large, however, most medieval births were seen as occasions of great joy, as they still are today.  It seems fitting to conclude with this miniature of the birth of St Fremund from Harley MS 2278, which shows the celebration of both men and nature at the blessed event. 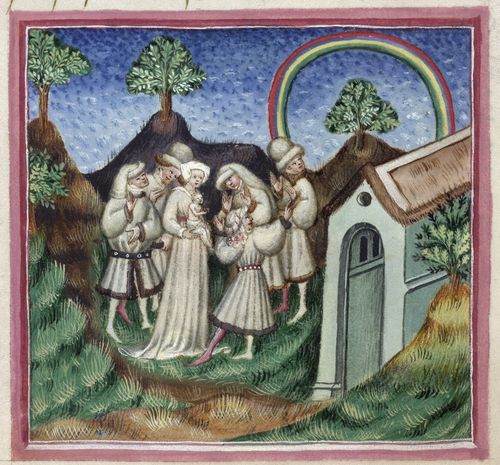 Thank you for a brilliant post! I was particularly struck by St. Edmund's halo from birth, which appears to me to be a very poignant form of christomimesis. Do you know whether this kind of evidence of sanctity was widely disseminated in hagiographies?

Very interesting (and apropos) blog. Your readers may have been interested to see a close-up of the scene from MS Royal F II 17. In contrast to all other medieval c-section images where the mother has already expired, Caesar's mother here is still alive! Look closely and you'll see that she's gripping the hand of her attendant. Other representations of Caesar's birth in the BL collection are:
1) London, British Library, MS Royal 16.G.VII, s. xiv ex. (Paris), f. 219r: Les faits des Romains – showing female attendants.
2) London, British Library, MS Egerton 1065, c. 1480 (Bruges), f. 9r: a copy of Jean du Chesne, Commentaires de César showing a male surgeon and female attendants.
You have an amazing range of medical MSS in your collection (more in the Sloane collection even than Harley) and it would be wonderful to see them exploited more in this blog.