The Last Will and Testament of Alfred the Great

Alfred the Great (871-899) and Eadred (946-955) are the only Anglo-Saxon kings whose wills have survived to the present day, both of which are found in the same manuscript, British Library Add MS 82931, known as the Liber de Hyda and a recent upload to our Digitised Manuscripts site. 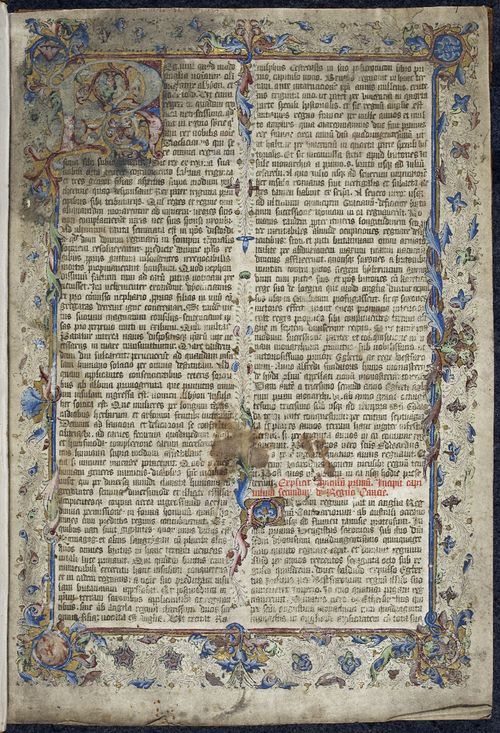 Although it was produced in the mid-15th century, the manuscript contains copies of much earlier documents dated between 455 and 1023, all relating to Hyde Abbey, Winchester. The documents are connected by a chronicle of Anglo-Saxon history beginning with the legends of the founding of Britain and ending abruptly (in mid-sentence) during the reign of King Cnut in 1023. Each of the later chapters of the chronicle is followed by an appendix containing wills, charters and legal documents from that period, dealing mainly with land grants to the abbey. Many of these documents are unique to this manuscript, so it is an important resource for Anglo-Saxon historians. The only copy of Eadred's will is found here, but a much earlier copy of King Alfred's will survives in an 11th-century manuscript, the Liber Vitae of the New Minster, Winchester (British Library, Stowe MS 944). 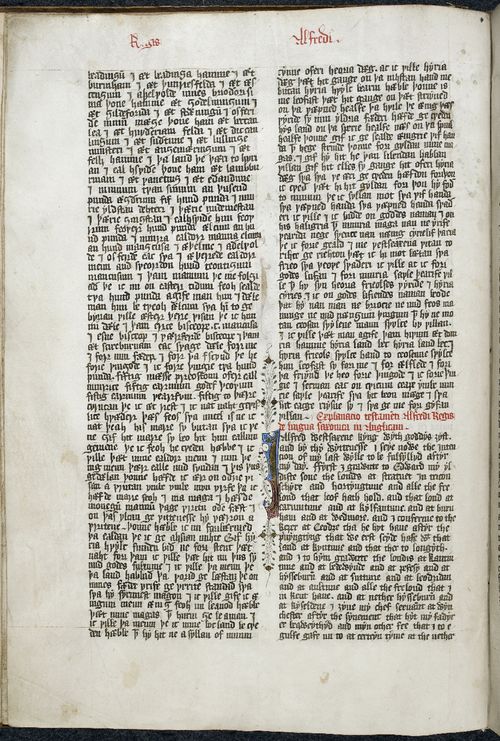 Alfred's will, drawn up c. 885, almost 15 years before his death, begins very much like a will today:

I, King Alfred, by the grace of God and with the advice of Archbishop Æthelred, and the cognisance of all the West Saxon council ...

It describes the past and future succession of his kingdom, and Alfred's relationship with his father, brothers and nephews. In the preamble, the legacy of Alfred's father, Æthelwulf, is summarised, referring to how his four sons each succeeded to the kingdom in turn, and how they each made provisions for their sons. Alfred, the youngest and last to succeed, was keen to establish his right to the property distributed in his will; and so mention is made to a meeting of the West Saxon council, after his brother Æthelred's death, where the thegns upheld Alfred's claims to his brother's inheritance.

Having dismissed all rival claims to the property, Alfred proceeds to distribute land, first to his elder son Edward, then to the Old Minster at Winchester (where he was buried), to his younger son, daughters, brothers' sons and a kinsman named Osferth. In what appears to be a sentimental gesture, he bequeaths to his wife Ealhswith the places of his birth, Lambourn, and two greatest victories, Wantage and Edington. His treasure is then allocated to his children, his followers, his nephews and to the Church. A total of 2000 silver pounds was distributed, an indication of the great wealth Alfred accumulated during his reign. The king then appealed to all his successors to abide by the conditions of his will, his final gesture being to grant freedom to all the members of the council who had served him.

Eadred, one of the lesser-known Anglo-Saxon kings, was Alfred's grandson, who succeeded his brother Edmund to the throne in 946. After a short reign, he died young of a serious digestive ailment and may even have suffered from a physical disability. Despite this, Eadred had some military successes and was able to incorporate the Viking kingdom of York into his realm. The provisions made in his will are evidence of the tenuous nature of his control: Eadred left large quantities of gold and silver 'for the redemption of his soul and for the good of his people, that they may be able to purchase for themselves relief from want and from the heathen army if they [have] need'. The money was entrusted to church leaders for distribution in their respective areas. Eadred must have been concerned for the future of his kingdom, with his successor, his nephew Eadwig, only 14 years old when he acceded to the throne. Eadwig is not mentioned in the will and Eadred's mother is the only family member who is bequeathed property. However, Eadred appeared keen to leave nothing to chance when it came to the welfare of his soul; he specified that gold was to be given to 'every ecclesiastic who has been appointed since I succeeded to the throne'. Neither did he forget the members of his household, who each received a legacy. 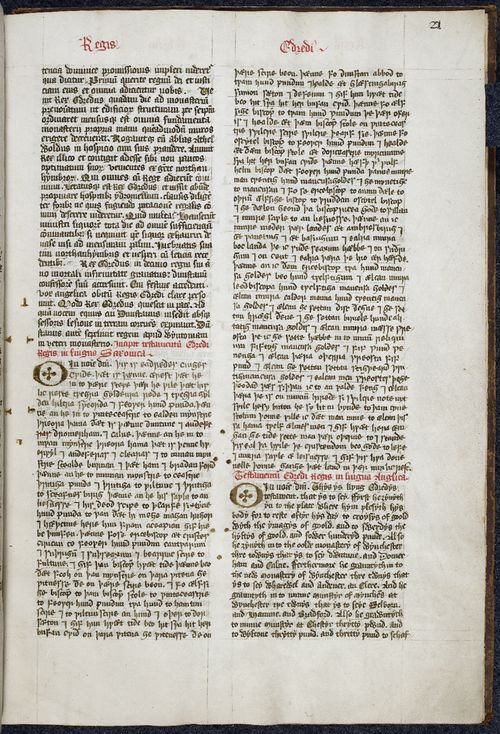 In the Liber de Hyda the wills are copied in three languages: Latin, Old English and Middle English. On the page above can be seen the end of the Latin will, followed by the Old English version in the first column, under the rubric 'Incipit testamentu[m] Edredi Regis in lingua saxonica'. Near the end of the second column is the Middle English translation with the title 'Testamentu[m] Edredi Regis in lingua Anglica'. The first line of the will shows the change in written English between the 10th and the 15th centuries, which the scribe has faithfully reproduced. 'þis is Eadredes cinges cwide' becomes 'Thys ys kyng Eadredys testament'. The English letter 'þ' or 'thorn' is replaced by 'th' and the French term 'testament' has replaced 'cwide' (the Old English word for speech from which 'quoth' is derived), meaning 'words' or 'instructions’. Today, when we say 'last will and testament' we use another word of Old English origin (from 'willan', meaning to want or wish) alongside the French term.