Wandering in the Desert of Religion

Cataloguing manuscripts at the British Library can be very exciting: you never quite know what's going to turn up – could I have predicted worms debating with a skeleton? On my recent list of items to tackle was a 15th-century collection of Middle English religious verse, Additional MS 37049. This manuscript has been a priority for digitisation because it is of great interest to scholars of Middle English verse, because of its multiple and vivid images, and because it is written on paper, and is therefore rather fragile. It had already been photographed, and so all that was holding it back from appearing on our Digitised Manuscripts site was a completed catalogue entry. 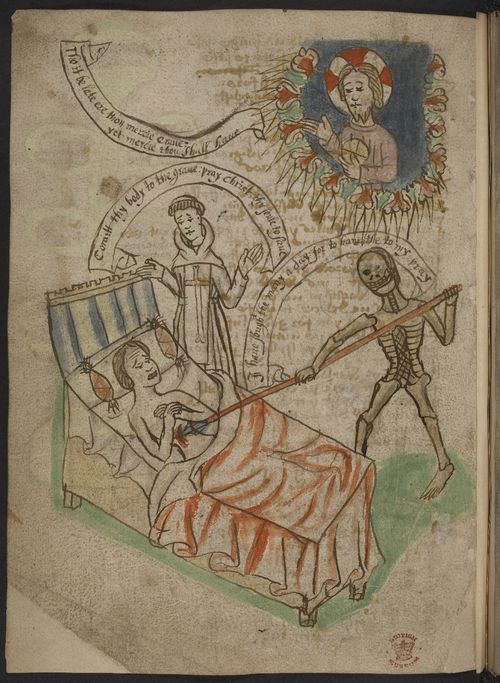 A man on his deathbed attended by a monk and a figure of death, who is saying ‘I have sought the (=thee) many a day, for to have the (=thee) to my pray(=prey)’. Christ on high offers absolution (London, British Library, MS Additional 37049, f. 38v).

My first port of call for information on this manuscript was the printed British Library Catalogue of Additions, and I found it under the title ‘THE DESERT OF Religion and other poems and religious pieces’. Then I knew I was in trouble! This was not going to be a short, simple task. There were 71 items in the contents list of the British Library catalogue (you can see the length of the printed catalogue entry under Related Resources in the online catalogue). Julia Boffey’s Digital Index of Middle English Verse (available online here) listed 69 records for this manuscript, each needing to be identified and checked. Almost every page contains at least one image to be described, and these are not images for the faint-hearted: they vary from the sickly-sentimental to the macabre to the ridiculous and are crammed with medieval religious symbolism.

After many fascinating hours, I am glad to say that I have emerged unscathed from my journey through the ‘Desert of Religion’, thanks to some excellent reference works on this manuscript, which continues to provide scope for further study. So, venture forth, those who dare! You will discover delights, like this image of a man up a tree: 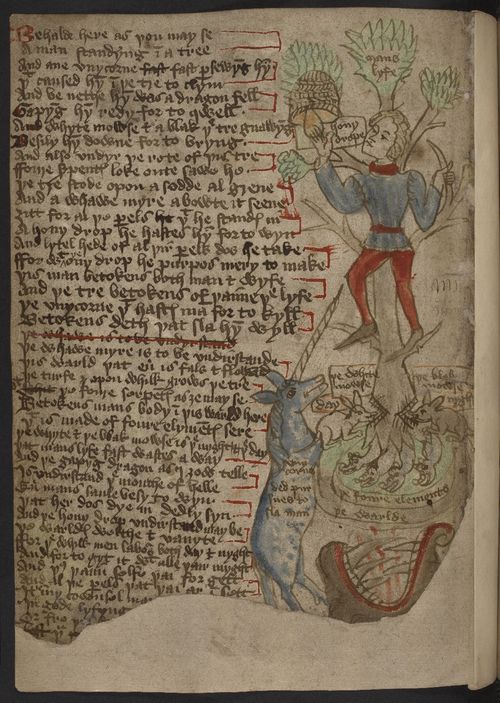 The contents include a verse on the founding of the Carthusian Order and, of course, ‘The Desert of Religion’, an allegorical poem using the symbol of a ‘tree of twelve virtues’ growing in the desert to illustrate the spiritual battle between virtue and vice. Diagrams of trees on alternate pages bear the names of virtues and vices on their trunks and leaves, giving visual form to the allegory. 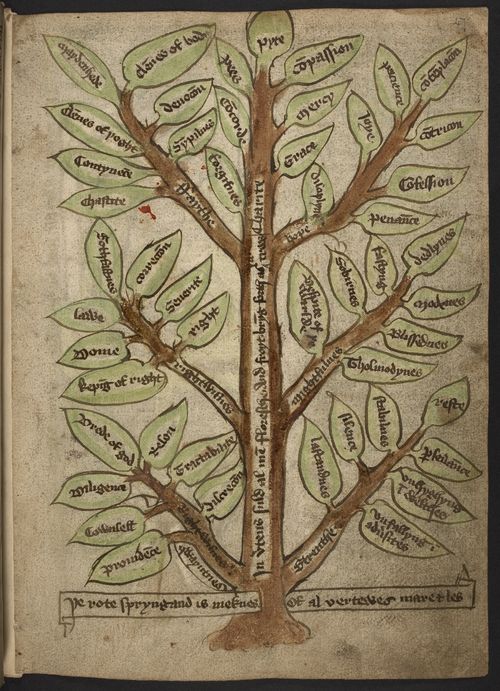 Other verses and texts, varying in length from several pages to a mere two-line caption on a scroll in an image, bear titles like ‘The Dawnce of Makabre’, ‘The Abuses of the Age’, ‘Come follow me my friends into hell’, and a personal favourite, ‘The disputacion betwyx the body and worms’ – you have to love these cheeky-faced worms! 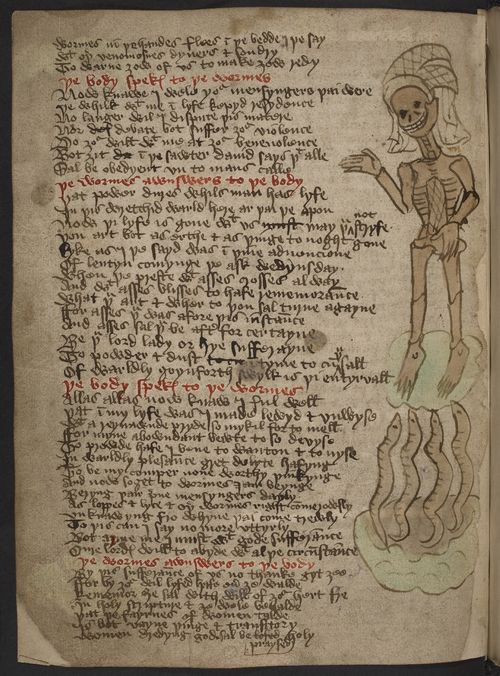 The wounds of Christ, and even the number of drops of blood he shed, are the subject of a number of poems, all with graphic illustrations. Deathbed scenes are another favourite. 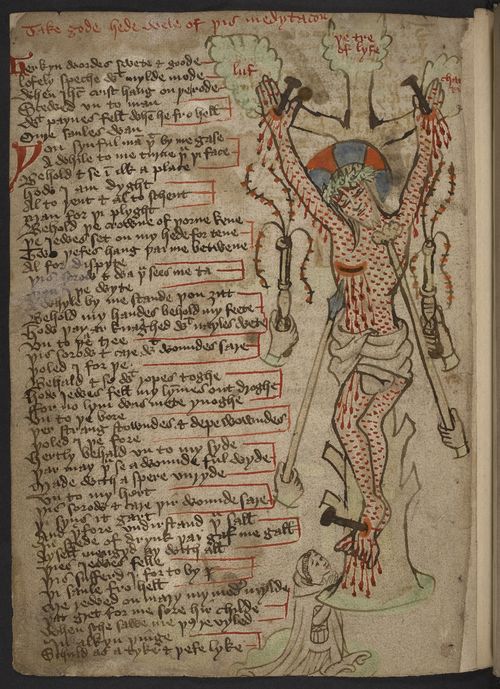 A macabre illustration of Christ nailed to a tree, with wounds dripping blood. The monk kneeling in front of him wears the white robes of the Carthusian order, one of the indications that this work was produced in an English Charterhouse. The dialect is Northern, so the monasteries of Mount Grace or Kingston-upon-Hull in Yorkshire have been proposed as possible places of origin (London, British Library, MS Additional 37049, f. 67v).

Described as a ‘spiritual encyclopedia of the Middle Ages’, for me this work provides an example of the delightful otherness of the medieval mind-set. And yet, do people really change? Macabre scenes of death and mutilation continue to fascinate and entertain modern audiences – the recent film series, Saw, is a particularly bloodthirsty example!