If you’re a regular reader of our blog, you probably already know that the British Library’s collection of Greek manuscripts covers a wide variety of subjects and spans a very broad chronological period: from Homer to hagiography, from Babrius to the Bible, from Menander papyri to musical manuscripts from the 19th century.  One group of Greek manuscripts you may be less familiar with, however, form part of our Royal collections, and consist of a number of laudatory or complimentary verses and prose compositions, in Latin and Greek, dedicated to Elizabeth I, Henry Frederick, Prince of Wales, Charles I, and Henry, Earl of Arundel.  These compositions were usually (though not always) written by members of public schools, such as Eton or Winchester, or of Oxford colleges. Most of these manuscripts will be digitised and made available online in the coming years. 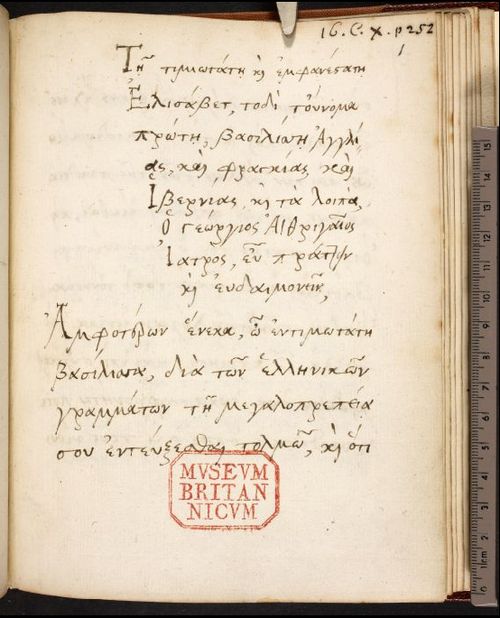 One manuscript from this group, however, has already been treated in extensive detail.  Royal MS 16 C X contains the autograph Greek Encomium on Henry VIII by George Etheridge, Regius Professor of Greek at Oxford, which was addressed to Queen Elizabeth I and delivered on the occasion of the Queen’s visit to Oxford in 1566.  The text gives us a fascinating insight into the author and how his life and career was impacted by events relating to the English Reformation, while also providing us with important information about Greek studies in Tudor England (Etheridge’s post, the Regius Professorship of Greek, was after all established by Henry VIII).  It also reflects the national concern for Elizabeth’s succession as a precondition for the security of the kingdom.

A project to digitise and edit the manuscript was undertaken by researchers at the Hellenic Institute in the History Department of Royal Holloway, University of London, and at the British Library, and an electronic edition can now be viewed online both on both Digitised Manuscripts and on a dedicated website hosted by the Hellenic Institute.  On this website, you can view the manuscript side-by side with a transcription, an edition, and a translation of the Greek text.  The site also contains a number of extremely helpful essays about George Etheridge, the text of the encomium, and the British Library’s collection of Greek manuscripts.

To view the manuscript and learn more about the project, please visit the homepage of the Etheridge Project.