While we have very many fragments of papyrus codices, and of early medieval parchment codices, it is not quite so common for late antique or early medieval bindings to survive.  The most famous bindings of papyrus codices are undoubtedly those from Nag Hammadi, dating from the third or fourth centuries.  Of course, the best-known early binding in the British Library’s possession is the St Cuthbert Gospel!

The digitisation of Papyrus 1442 (P. Lond. IV 1419) means that one of these early bindings, from a tax register written at Aphrodito in Egypt in 716-717, can now be viewed in great detail online.  The binding is a limp leather covering, lined with papyrus. Exterior of the binding, Papyrus 1442

It retains its flap, which would probably have had a leather wrapping band attached, to keep the codex closed.  These early leather bindings were formed from the hide of a sheep or goat, and it was often the case that skin from the animal’s neck would be used to form the flap.  One point where this binding seems to differ from those of the earlier Nag Hammadi codices is in the shape of the flap: the Nag Hammadi flaps are generally simple triangles or rectangles.  Here, however, the flap has a bit more of a stylised shape (which seems to be intentional, and not simply a result of later damage to the binding). 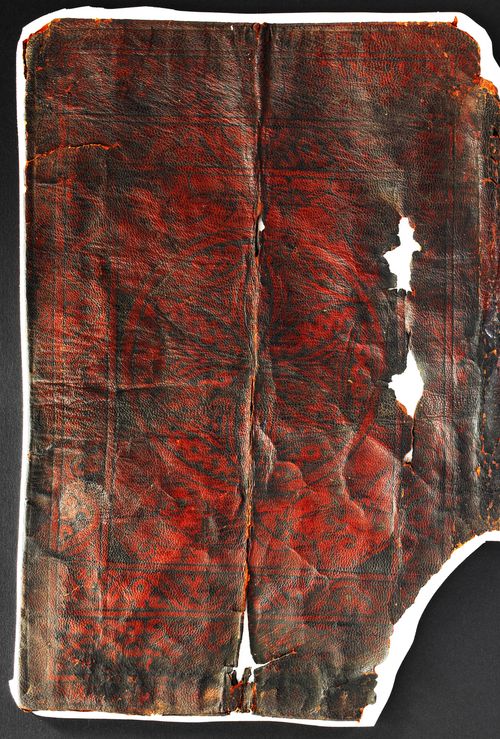 Detail of the exterior of the binding, enhanced to show decoration detail, Papyrus 1442

The cover has a decoration which is fairly typical of Coptic decoration. In the centre, there is a circle around a six-pointed star, with additional interlaced and undulating patterns around the border. The decoration is drawn on with ink or paint (see above).

A look at the inside of the cover will give a better sense of how the codex itself was constructed. 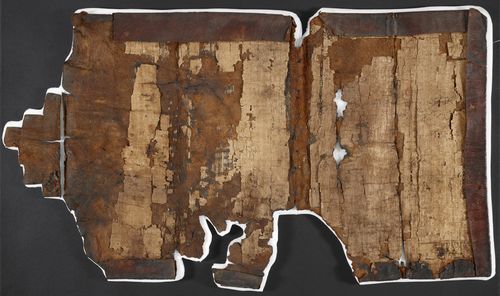 Interior of the binding, Papyrus 1442

It is clear from the single line of holes in the spine that this was a 'single quire' codex, that is, it was constructed by laying all the unfolded sheets one above another on top of the binding, piercing the sheets in the middle, and folding them.  At some point, the binding came loose, and a number of leaves had already been lost from the book by the time it arrived at the British Museum.  Some of these are now in Berlin (P. Berol. inv. 25006).