The Constitution of Athens

Of all the Greek papyri now in the British Library, perhaps the most treasured, and certainly the most visually striking, is the Aristotelian Constitution of Athens, which describes the development of the Athenian Constitution down to 403 BC, and the operation of the government at the time of writing in the 330s or 320s BC.  The work is one of some 158 constitutions of Greek city-states known in antiquity to have been produced by the school of Aristotle (or perhaps by Aristotle himself).  Until the end of the nineteenth century, this text was known only from brief quotations by later authors, and the text seemed to be one of those key works from antiquity that we would never retrieve.

Then, in the space of a decade or so, two separate discoveries were made.  In 1879, two leaves from a papyrus codex were acquired by the Ägyptische Museum in Berlin, dating perhaps from the second century AD and containing fragments, with marginalia, of the Constitution of Athens (These leaves are now P. Berol. 5009, formerly P. Berol. 163).  In 1890, three rolls, followed shortly afterwards by a fourth, arrived at the British Museum in London.  The rolls were quickly identified as containing the Constitution of Athens by Frederic G. Kenyon (aged only twenty-seven, and just recently hired by the Department of Manuscripts), and the discovery was announced publicly in The Times in January 1891.  A critical edition by Kenyon followed (significantly revised in subsequent editions), as did an English-language translation.  The rolls were framed and hung in the Reading Room of the British Museum for many years.

Yet to refer to the papyrus as the Constitution of Athens is to tell only part of the story.  In fact, the rolls had initially been used to record farm accounts of an estate near Hermopolis, in Egypt, in 78-79 AD.  The other side (the verso) of the first roll was initially used to record part of a commentary on Demosthenes’ speech In Midiam.  Some time around the end of the first century, the Constitution of Athens was recorded on the verso of all four rolls, and the column and a half of the commentary on Demosthenes was crossed out. 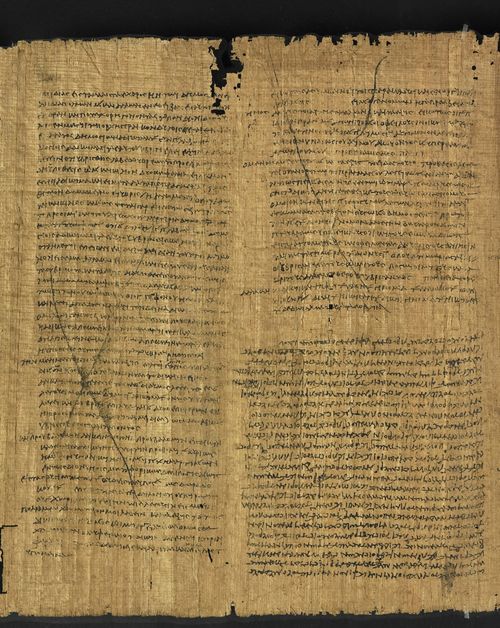 Section including the crossed-out commentary on Demosthenes, Papyrus 131.

At this time (the writing of the Constitution), some additional papyrus was attached to the end of this roll, to accommodate the eleventh column of the Constitution of Athens (now on the far left of f. 2r, or the far right of f. 2v).  On the recto of this additional papyrus are some fragments of scholia (comments) on Callimachus’ Aetia, though whether this was written before or after the section was added to the papyrus roll is uncertain.  Papyrus was frequently re-used in this way, and many other papyri in the British Library’s collection contain multiple texts (see, for example, the Gospel of Thomas, written on the back of a survey list).

For more information about the papyrus, and for further reading, see the catalogue entry either on Digitised Manuscripts or on SOCAM.