A Map at the End of the World

Now fully digitised on our Digitised Manuscripts site, and currently on loan to the National Library of Australia for the Mapping Our World exhibition, Royal MS 14 C IX is one of the British Library’s copies of Ranulph Higden’s Polychronicon, and one of numerous manuscripts in our collection containing medieval maps of the world.

Higden coined the name Historia Polychronicon – meaning ‘a history of many ages’ – to encapsulate the universal scope of his chronicle, which encompassed not only the history of the entire world from Creation to his own era of the fourteenth century, but also its geography as well. 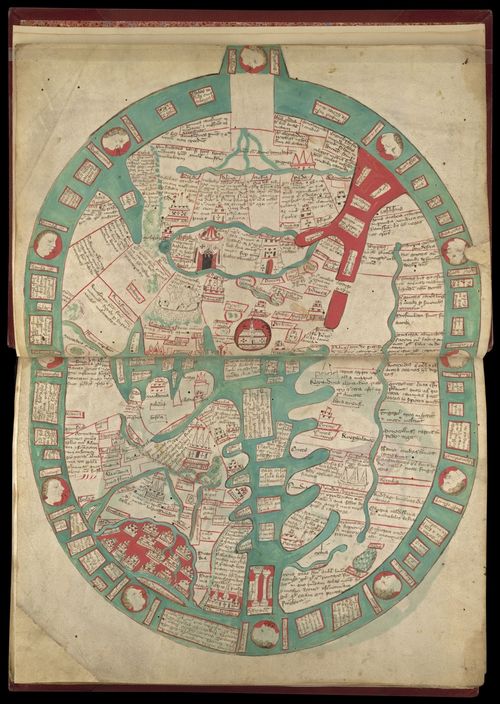 This marrying of history and geography can be seen with particular clarity in the large mappa mundi at the beginning of Royal MS 14 C IX, unique among the nearly 150 surviving copies of the Polychronicon in containing two maps (see above).  Unlike their modern counterparts, medieval maps were not concerned solely with landmasses, mountains, rivers, borders and cities, nor with ‘to-scale’ representation.  They were conceptual objects, upon which time as well as space were plotted, with historical events shown alongside visual or prose descriptions of the topography and people of the world.

Following a pattern laid down by earlier maps, this one divides the world into the three known continents: Asia in the upper half (f. 1v), Africa stretched along the right and Europe in the lower left-hand corner (f. 2r), with England coloured in red. 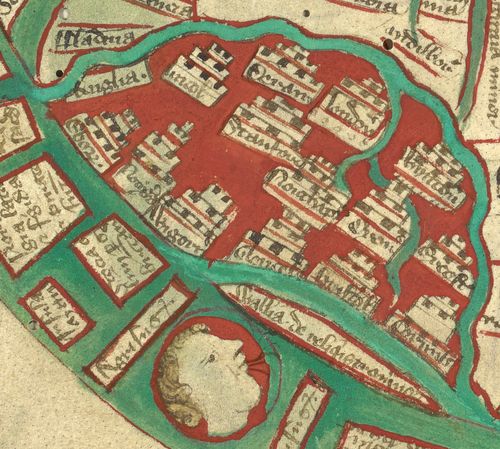 All is surrounded by green ocean, and buffeted by the winds, which are represented by twelve heads, each huffing and puffing.  Major rivers are shown: the Euphrates and the Tigris enclosing Mesopotamia (which means ‘between two rivers’; see above), the Nile snaking its way across Africa, the Rhine coming down from the Alps, and even the Thames meandering past Oxford and London.  Many of the descriptive labels are excerpted from the text of the Polychronicon, indicating that its creator was familiar with Higden’s book, and perhaps used this very copy to annotate the map. 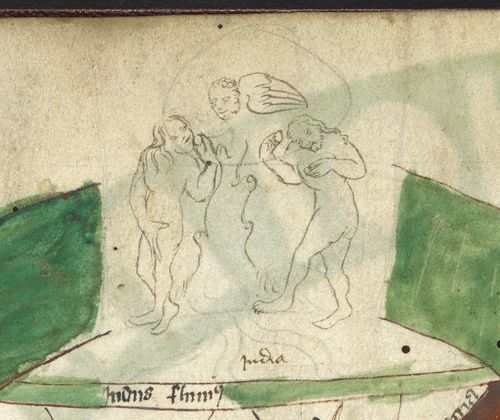 The map also charts the flow of Christian history.  The blank panel at the top is intended to feature a drawing of Adam and Eve in the Garden of Eden (as seen on the other map in this Polychronicon on f. 2v; see above).  Babylon and the Tower of Babel are beneath it, followed by a rather charming sketch of Noah in his ark with a ram, a lion and a stag. 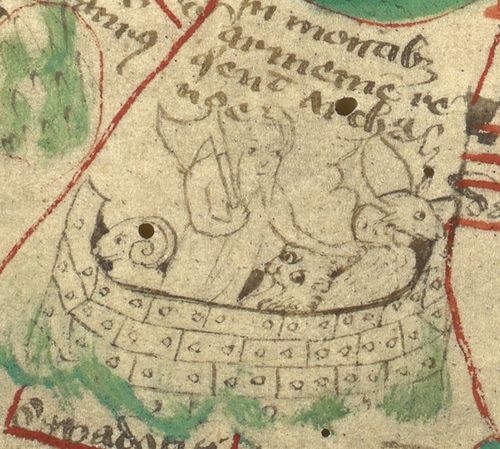 Jerusalem is given particular prominence, but most remarkable is possibly the tiniest representation of the Crucifixion in a manuscript in the British Library. 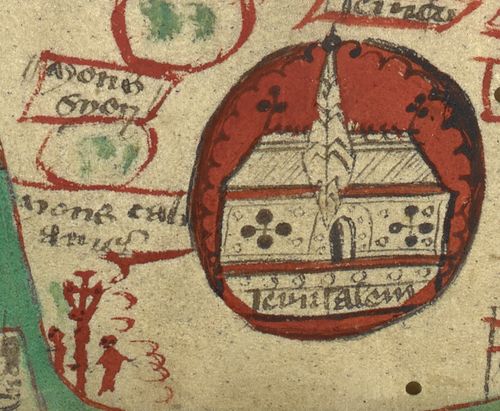 Beneath the label ‘Mons Caluarie’ (Mount Calvary), we see Christ on the cross, the nails in his hands and feet and the wound in his side all clearly visible, accompanied by two figures, presumably the Virgin Mary and St. John the Evangelist.

Important sites in subsequent Christian history are marked in the lower half of the map: Rome and St. Peter’s as the centre of the Catholic Church, and Santiago de Compostela as the last stage in the Christianization of Europe. 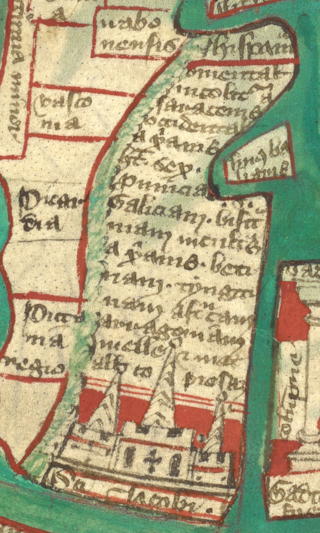 In Genesis, there are six days of Creation, followed by a seventh day of rest.  St Augustine interpreted this as a prefiguration of the course of human existence, dividing history into six ‘ages of the world’ and proposing that the Last Judgement would occur at the end of the sixth age.  Although Higden divided the historical books of the Polychronicon along different lines, nevertheless he retained the sixfold structure that had been a common feature of universal history since Orosius’s Historia aduersos paganos.  Higden wove together universal and insular historical divisions of time, concentrating the first five ages in the first two historical books of the Polychronicon, and dividing the remaining four according to successive invasions – Roman, Anglo-Saxon, Viking, and Norman – which had long been depicted in history books as divine punishment for people’s sinfulness.  God was immanent in the medieval world and his intervention in human history in the sixth age an imminent possibility.  The reader of this copy of the Polychronicon found themselves at the end of the world in more ways than one.