Egerton MS 1894, better known as the Egerton Genesis Picture Book, has been described as one of the most fascinating – and puzzling – of all the manuscripts in the British Library collections.  The Egerton Genesis Picture Book (one of our most recent uploads to our Digitised Manuscripts site) was produced in England in the 3rd quarter of the 14th century.  It contains a cycle of 149 illustrations of the Book of Genesis, running from the Creation through the story of Joseph.  The images are described in short captions in Anglo-Norman French, based upon text from Peter Comestor’s Historia Scholastica.

The artist responsible for the paintings in this volume has been named the Master of the Egerton Genesis, in honour of his work in this manuscript.  His hand appears in a number of other contemporary manuscripts, and he was clearly highly skilled, but also displays a unique and sometimes rather irreverent perspective on familiar subjects.  For example, in the final image of the Creation the Master depicts the Lord God fast asleep among the flowers he has just made, his bare feet exposed.  If it weren’t for the halo and the elegant pose, he could be a shepherd who has dozed off after his lunch. 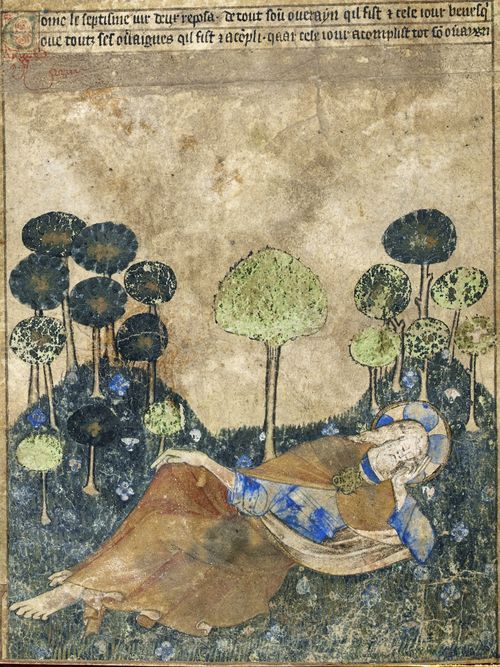 In many ways, the Egerton Genesis Picture Book can be seen as an early comic book, with four pictures on most pages, each illustrating an episode in a well-known tale.

Here, for example, is how the Tower of Babel story is treated:

Nimrod and the Tower of Babel

Nimrod, grandson of Ham and great grandson of Noah, the proud hunter and tyrant who defied God, is mentioned in the book of Genesis, and in Hebrew and Christian tradition he is usually seen as the leader responsible for the building of the Tower of Babel.  On ff. 4v-6r his story is told in pictures.

First Nimrod is shown holding a spiked club and towering over his ancestors, looking back at them in a rather haughty manner: 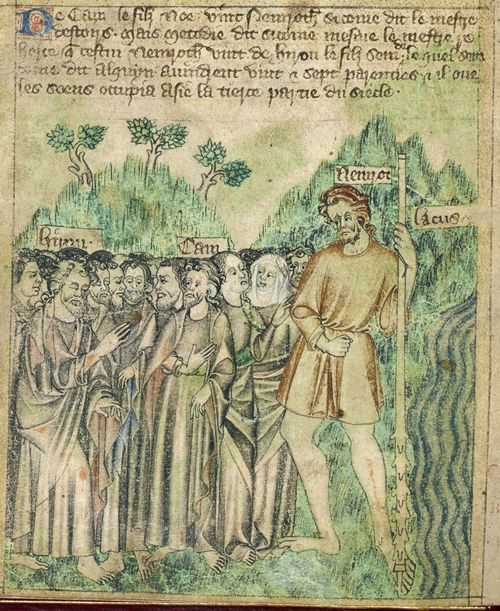 Detail of a miniature of the ancestry of Nimrod, Egerton MS 1894, f. 4v

The story continues on the facing page, with four scenes from the life of Nimrod.  He is shown using a rod to force his people to worship fire, and as a young man, being instructed by Jonitus, the fourth son of Noah, in astronomy.  These episodes are taken from the Historia Scholastica rather than the Bible. The descendants of Ham and Japheth are shown in the other two images on this page. 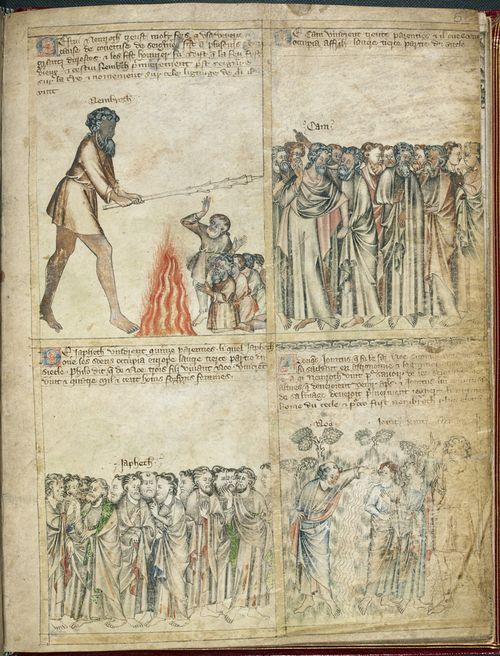 Detail of a miniature of Nimrod and the descendants of Ham and Japheth, Egerton MS 1894, f. 5r

In the full-page image of the building of the Tower of Babel on the following page, an older Nimrod, still standing head and shoulders above everyone else, consults with his  kinsmen, who may be telling him not to anger the Almighty.  The image is full of activity as workmen construct a rather Italian-style tower.  In the upper left part, a mason holds up his trowel, while another lays blocks above him. 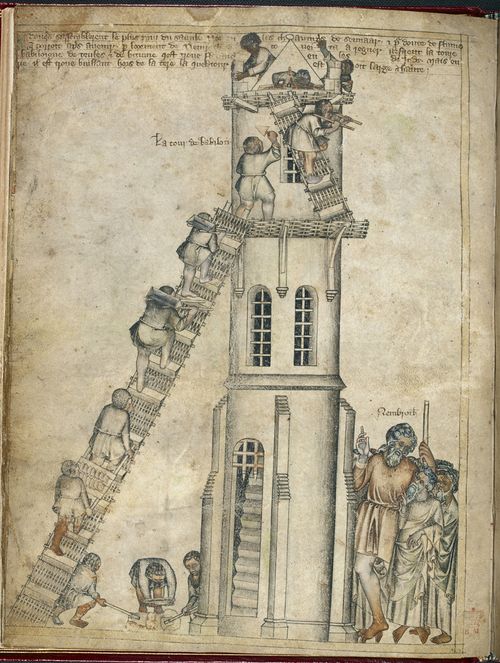 Detail of a miniature of the building of the Tower of Babel, Egerton MS 1894, f. 5v

The final image, showing the destruction of the Tower of Babel, occupies the whole left hand side of the page. God is directing the four winds, which huff and puff and blow the tower down (eat your heart out, big bad wolf – this one is made of bricks!) Detail of a miniature of the destruction of the Tower of Babel, Egerton MS 1894, f. 6r

Of course, violence is a key ingredient of most comic strips, and the Egerton Genesis Picture Book is no exception.  How is this for a healthy display of weapons and carnage? 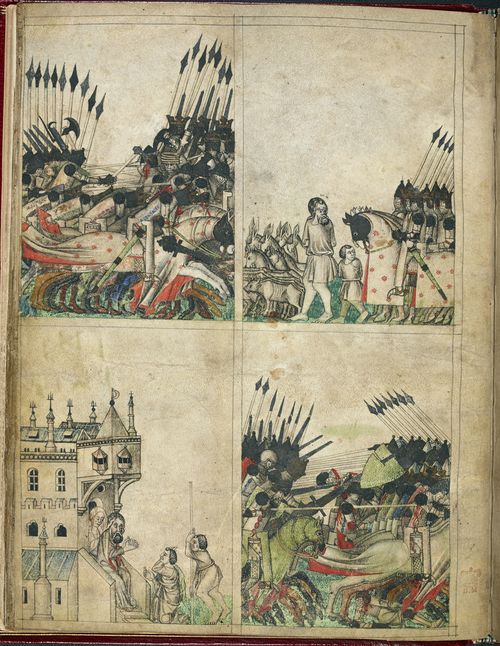