The Height of Fashion

Along with the less-than-romantic scenes of butchery and betrayal, murder and mayhem (see our previous post Sex and Death in the Roman de la Rose), there are of course many miniatures in Harley MS 4425 which depict an idealised courtly world and its inhabitants.  As well as serving as a narrative accompaniment to the text, these illustrations reflect the fashions and culture of the late fifteenth-century Burgundian court, and the tastes of the nobleman who commissioned its production, Engelbert II, Count of Nassau and Vianden (d. 1506).

The book is decorated throughout with a series of narrative column miniatures as well as four large miniatures enclosed by naturalistic borders.  The characters are portrayed in pastoral landscapes and blossoming pleasure gardens, and the borders are filled with leaves, flowers, birds and butterflies – all intended to evoke ideas of fertility, new life and, erm, ‘romantic feelings’… 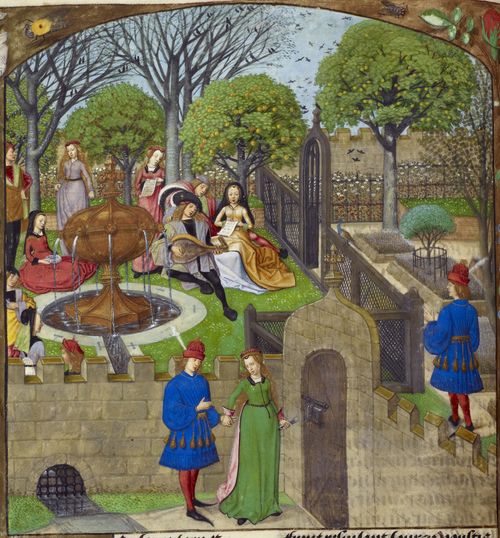 As the narrator (The Lover) relates his tale, the reader is treated to scenes of courtly life, as seen in this miniature above of a walled garden: fountains, fruit trees and peacocks; a man playing the lyre and musicians playing the pipe and tabor, kortholt and harp; women singing (one can actually see the neumes – medieval musical notes – on the scrolls they are holding); women doing embroidery; hand-holding and friendly embracing, conversation and dancing.

The variety and detail of the characters’ clothing makes this manuscript a valuable source for understanding more about the fashions of a very particular period and location.  Yet close inspection and comparison with other contemporary portraits and depictions of dress reveals, however, interesting juxtapositions in the style and date of the fashions worn by the protagonist and other characters of the Roman de la Rose. 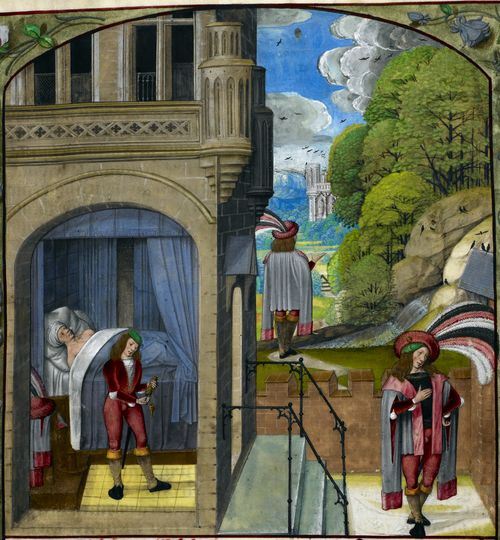 Detail of a miniature of the Lover asleep; dressed; and approaching the Garden of Love, Harley MS 4425, f. 7r

At the beginning of the tale, the narrator (L’Amans or The Lover) describes how all the events he is about to relate were experienced by him during a vivid dream.  In the large opening miniature above, we see him tucked up in bed, dreaming about arising and getting dressed.  The objects in his hands might be a case containing a dressing needle; the narrator tells of how he rose in his dream and stitched his sleeves together in a criss-cross pattern.  Over his shirt he is wearing a dark red velvet doublet with open lacing with matching hose.  Outside and fully clothed, he has on a grey gown lined in red over a black damask jacket.  The miniature shows him setting out, full of the joys of spring, and coming across a little stream where, the text states, he decides to take a wash. 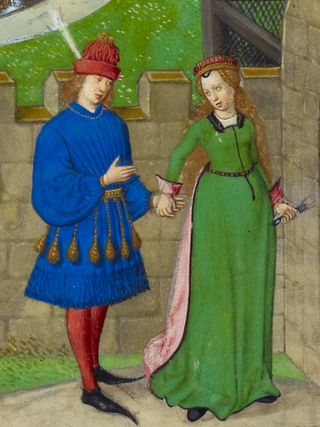 Detail of a miniature of the Lover entering the Garden of Pleasure, Harley MS 4425, f. 12v

Elsewhere, though, we see the narrator dressed differently.  After the portraits of the Vices, the Lover appears dressed in a blue robe with ‘dagging’ (slashed edges on the skirt) and a gold belt with tassels.  His shoes also have ‘pikes’ (long points), which must have presented some obstacles to showing off one’s deft footwork when dancing!  To contemporary eyes, such an outfit would have contrasted with the much more modern and fashionable garments worn by the other gentlemen and ladies in the scene, perhaps evoking the status of the narrator as a foreigner to this dream-world and as someone from the distant past (Guillaume de Lorris having written the first part of the Roman back in the 1220s). Detail of a miniature of a man leading the Carolle (round dance with music) in the garden of Sir Mirth, Harley MS 4425, f. 14v

In a miniature of a dancing troupe, the gentleman leading the dance wears a curious mixture of styles.  The old-fashioned dagging reflects the artist’s interpretation of the description of his clothing as ‘cut up in many places’, as do the slashes in the fabric of his shoes.  However, his long hair and cap are more typical of the 1490s.

On the subject of headgear, there are some quite magnificent hats and headdresses on display throughout the manuscript: 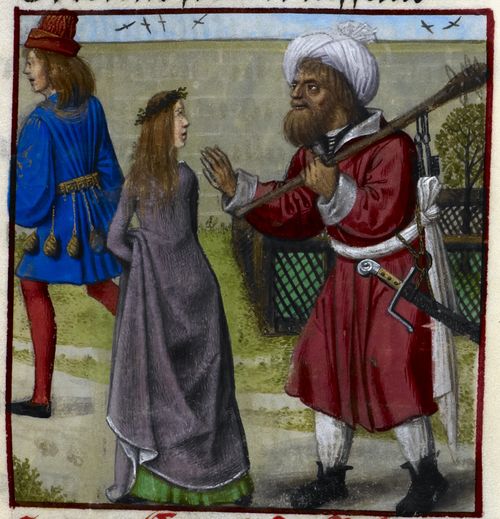 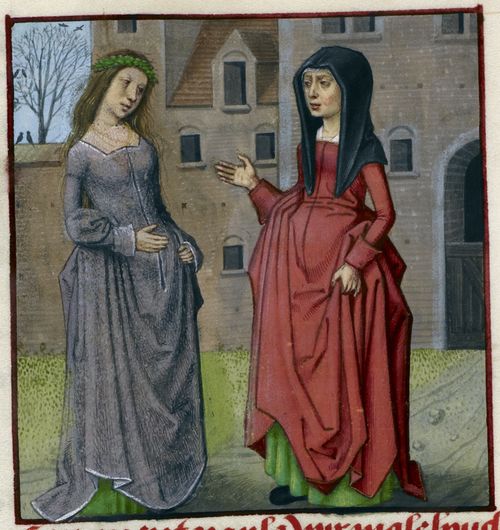 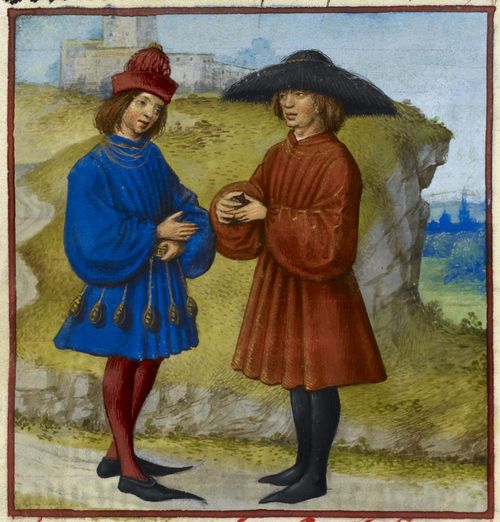 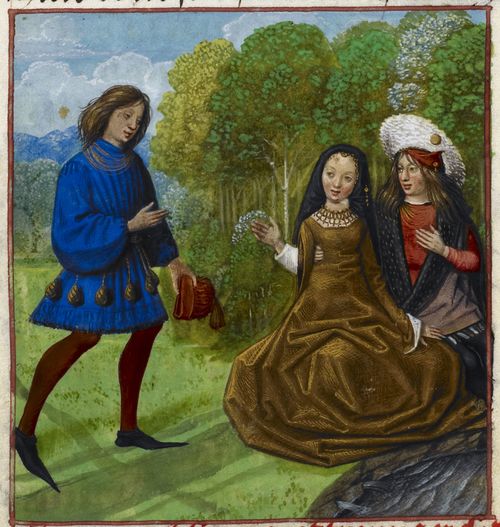 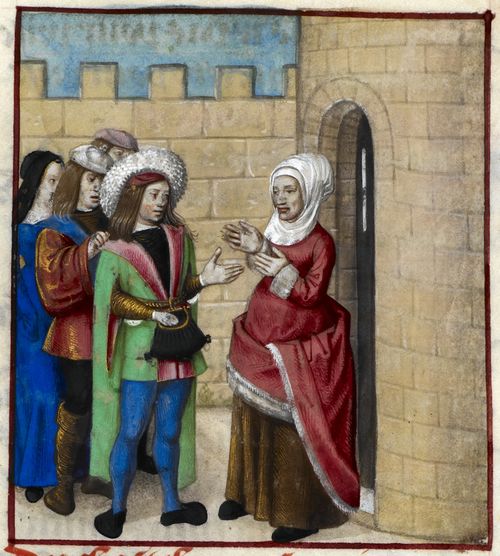 We also get to see the raiment of other stations in society, past and present, including: 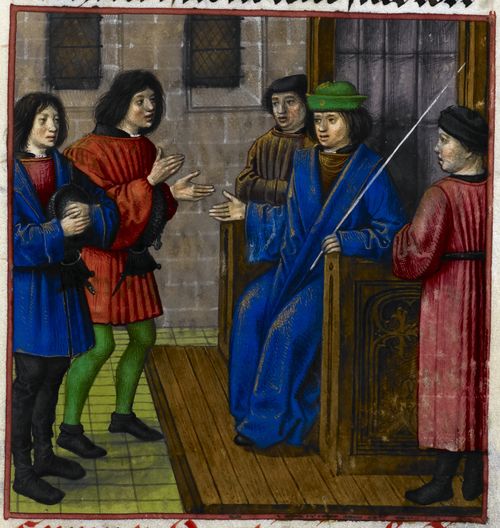 Detail of a miniature of Virginius pleading before a judge (Appius), holding his staff of office, Harley MS 4425, f. 54r 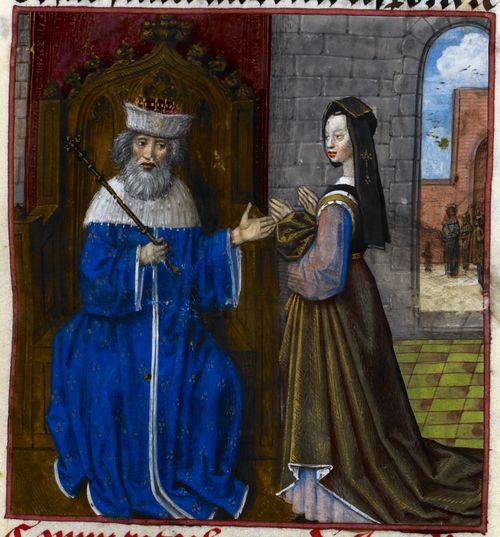 Detail of a miniature of a king (Croesus), enthroned and holding his sceptre, speaking to his daughter, Phanie, Harley MS 4425, f. 62r 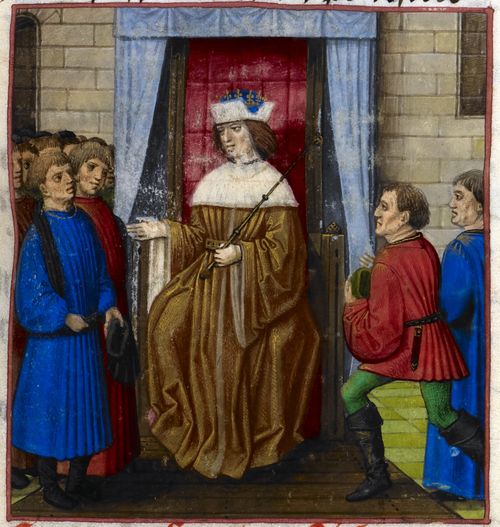 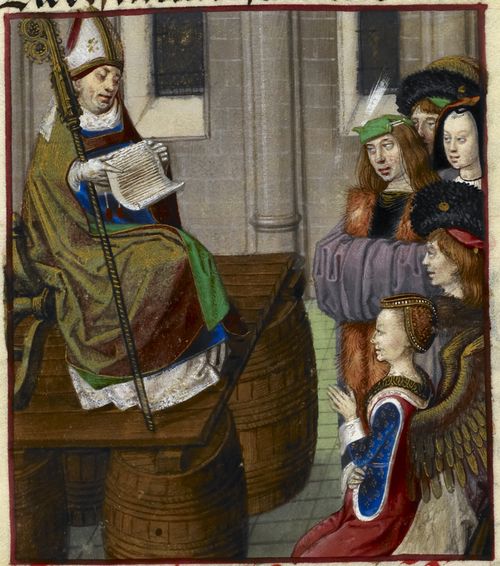 Detail of a miniature of a bishop with mitre and crozier, preaching to the armies of Venus, Harley MS 4425, f. 167v 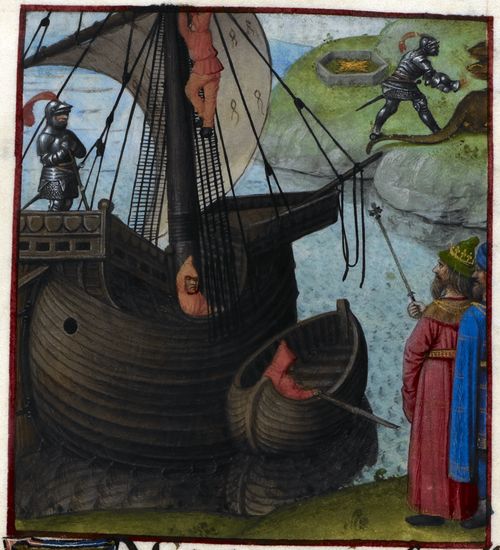 Detail of a miniature of soldiers in armour and sailors (Jason and the Argonauts), Harley MS 4425, f. 86r 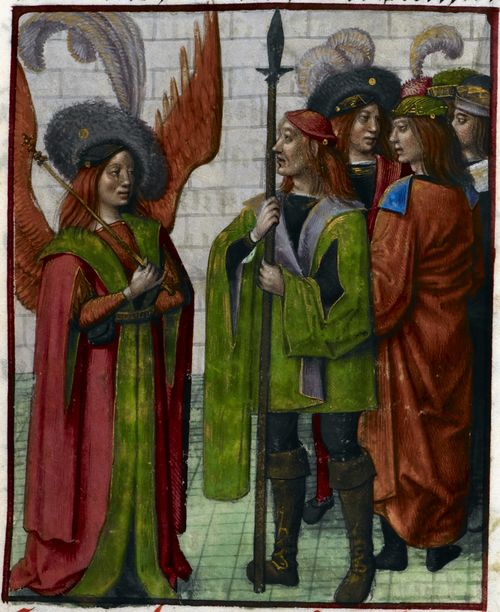 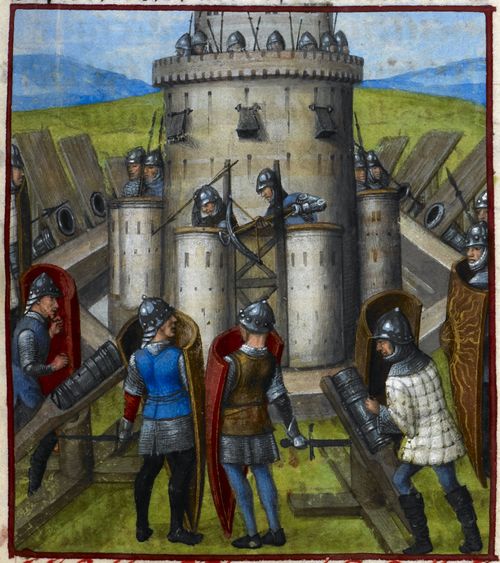 Detail of a miniature of soldiers preparing a siege with cannons, Harley MS 4425, f. 139r 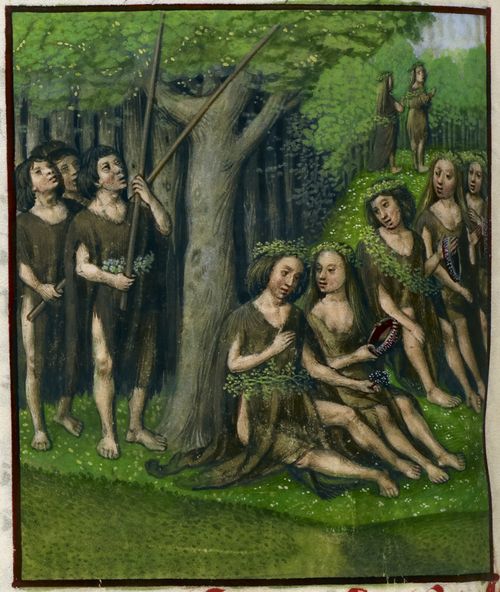 Detail of a miniature of prehistoric people living in the woods, wearing nothing much, Harley MS 4425, f. 76v

And, at the very bottom of the pile, the less fortunate in society: paupers and beggars in their rags and cast-offs. 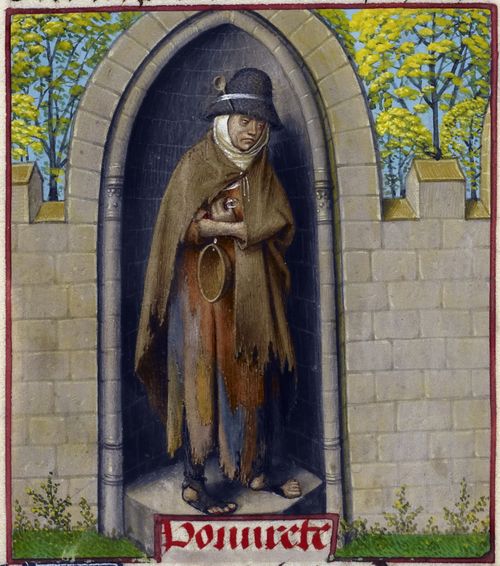 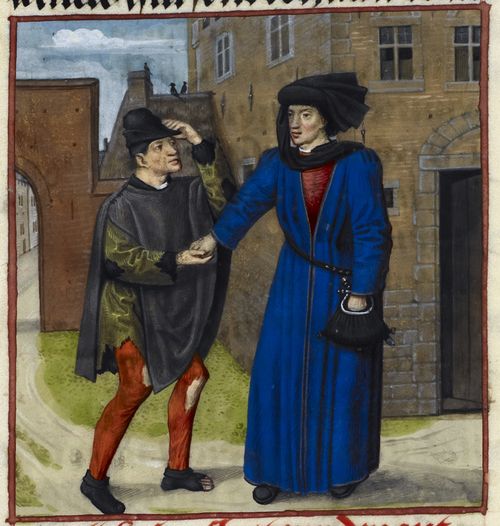 Detail of a miniature of a poor man being given money by his true friend (who is wearing another great hat, called a ‘chaperon’), Harley MS 4425, f. 47v 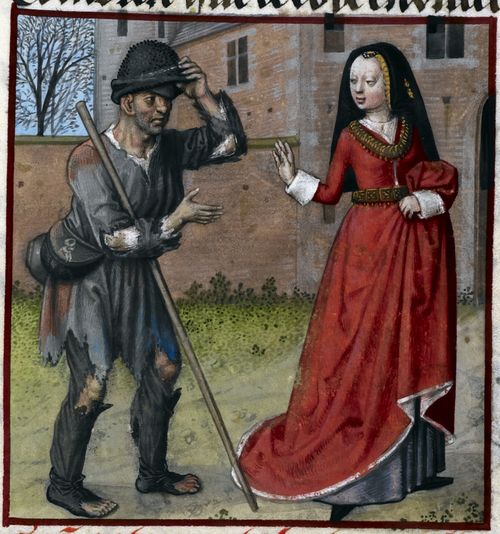 Do let us know what your favourite images from this manuscript are, and don’t forget to follow us on Twitter: @BLMedieval!

Wonderful detail... I'm afraid though my warped sense of humour wants to put a caption on the last picture: "A woman of firm and instant decisions. If she's taking, 'yes' if she's giving, 'no'."