The Three Living and the Three Dead

Inspired by the massive success of our recent Knight v Snail post, we thought it might be interesting to have a look at some other tropes of medieval art which feature in many of our manuscripts.  One such is that of the Three Living and the Three Dead. 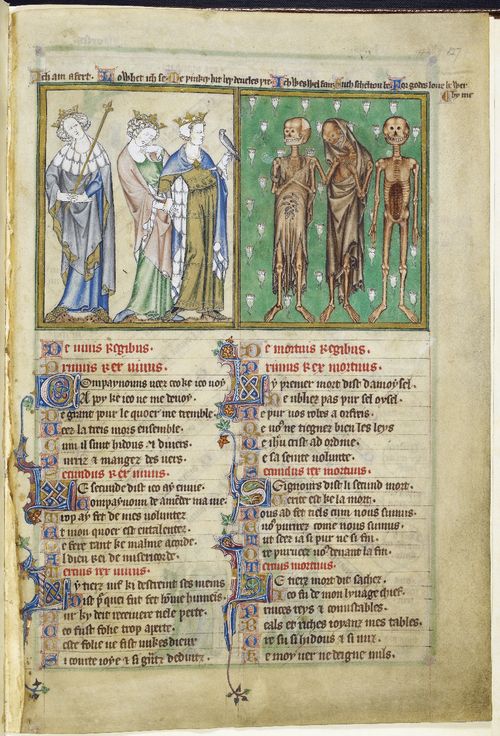 The precise origins of the Three Living and the Three Dead are still somewhat mysterious, but there are many versions of the tale dating back to the 13th century, with the best-known coming from England and France.  The basic version of the story goes like this: three young noblemen are out hunting when they suddenly come across three corpses, which are in varying states of decay, but nonetheless still animated.  Unsurprisingly, the young men express shock and dismay at the sight, while the three corpses admonish them to consider the transience of life and to improve their behaviour before it is too late. 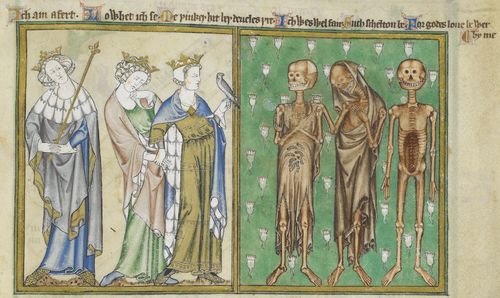 The dialogue between the two groups is sometimes explicit, as in the relatively early example above from the early 14th century De Lisle Psalter (Arundel MS 83).  Beneath a miniature of three kings encountering three corpses is an abridged version of the Anglo-Norman poem Le dit des trios morts et trios vifs which describes the ensuing conversation.  Interestingly, above this double-register miniature is a series of inscriptions in the English vernacular, giving additional voice to the characters.  The Three Living cry out: ‘I am afraid’ (Ich am afert), ‘Lo, what I see!’ (Lo whet ich se), and ‘Methinks these be devils three’ (Me þinkes hit bey develes þre).  And the Three Dead reply: ‘I was well fair’ (Ich wes wel fair), ‘Such shall you be’ (Such schel tou be), and ‘For God’s love, beware by me’ (For godes love bewer by me). 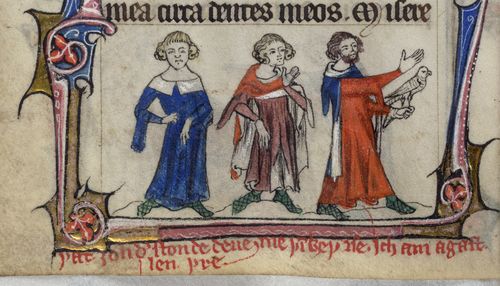 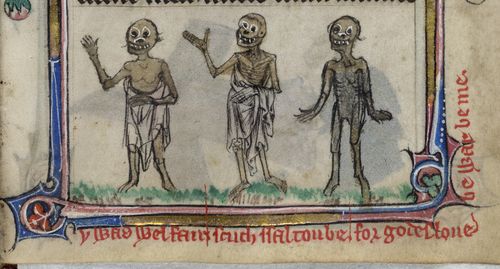 Detail of bas-de-page miniatures of the Three Living and the Three Dead, from the Taymouth Hours, England, 2nd quarter of the 14th century, Yates Thompson MS 13, ff. 179v-180r

Similar rubrics can be found in the illustrations of this scene in the mid-14th century Taymouth Hours (Yates Thompson MS 13; see our previous post about this magnificent manuscript). The Three Living can be found in the bas-de-page of f. 179v, confronting the Three Dead on the following folio (f. 180r).  One of the Living cries out that he is aghast at the spectacle (Ich am agast), while the others recoil in horror.  The Dead respond in almost identical fashion to those in the De Lisle Psalter, exhorting the Living to take their message to heart and change their ways.

These bas-de-page scenes can be found in the Taymouth Hours towards the end of the Office of the Dead, a set of prayers for the dead and dying that were included in virtually every medieval Book of Hours.  In some later medieval Hours, the visual motif of the Three Living and the Three Dead was ‘promoted’ to the leading role, prefacing the text of the Office proper.  One interesting example comes from Add MS 35313, a manuscript variously called the ‘London Rothschild Hours’ or the ‘Hours of Joanna I of Castile’, which was produced, probably in Ghent, about the year 1500.  It was almost certainly created for a female patron, possibly Joanna I of Castile, who was often called Joanna the Mad (for more information about Joanna and her manuscripts, see also The Mystery of the Hours of Joanna the Mad, A Medieval Menagerie, and our calendar series for 2012). 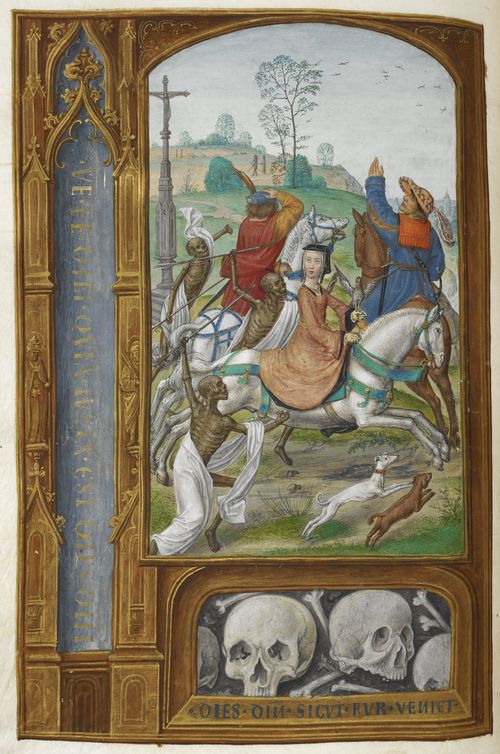 Detail of a miniature of the Three Living and the Three Dead at the beginning of the Office of the Dead, from the Hours of Joanna I of Castile, southern Netherlands (Ghent?), c. 1500, Add MS 35313, f. 158v

The Office of the Dead in Add MS 35313 opens with a scene of the Three Living encountering the Three Dead while out hawking, and is unusual in including a woman among the hunting party.  This miniature may be a copy of a similar scene in a Book of Hours that belonged to Mary of Burgundy, who was the mother-in-law of Joanna I of Castile; these hours are now in Berlin (Staatliche Museen, Kupferstichkabinett MS 78 B 12, f. 220v).  There are no rubrics or explanatory text associated with this miniature, which implies that these sorts of images were widespread enough to be instantly recognisable to a reader.  The Three Dead, however, appear much more threatening here than in earlier versions, going so far as to chase after the escaping riders with arrows in hand. 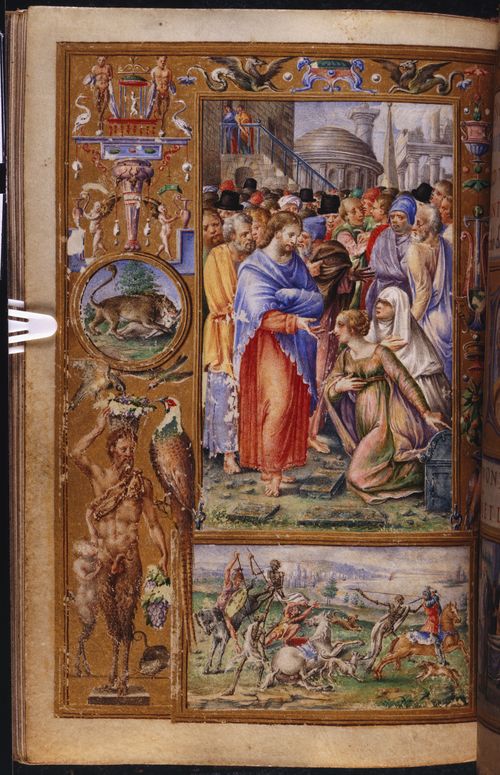 Another group of ominous Dead appear in the Stuart de Rothesay Hours, produced in Italy c. 1508 – c. 1538.  Beneath a miniature of the Raising of Lazarus is a small panel of the Three Dead, who appear to be attacking the Three Living; note the terrified horses and hunting dogs circling the scene (see detail below).  Rather than exhorting the living to change their ways, the dead are here presented as a danger in themselves. 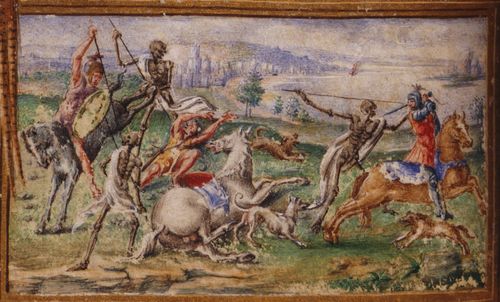 Several more images from our collections are below.  As always, please let us know what you think; you can leave a comment below, or contact us on Twitter at @BLMedieval. 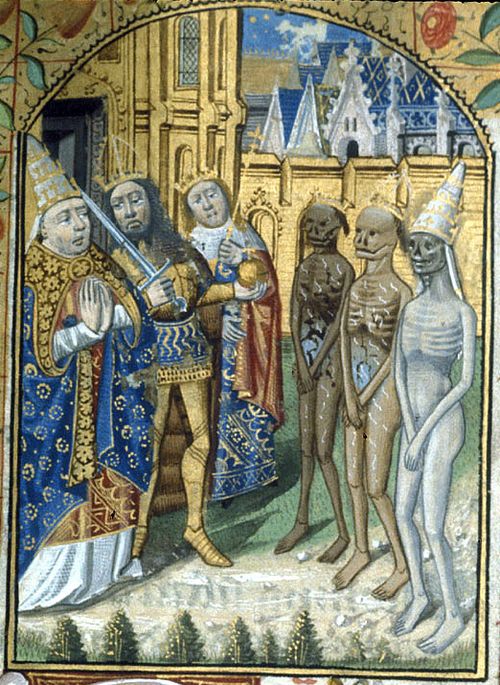 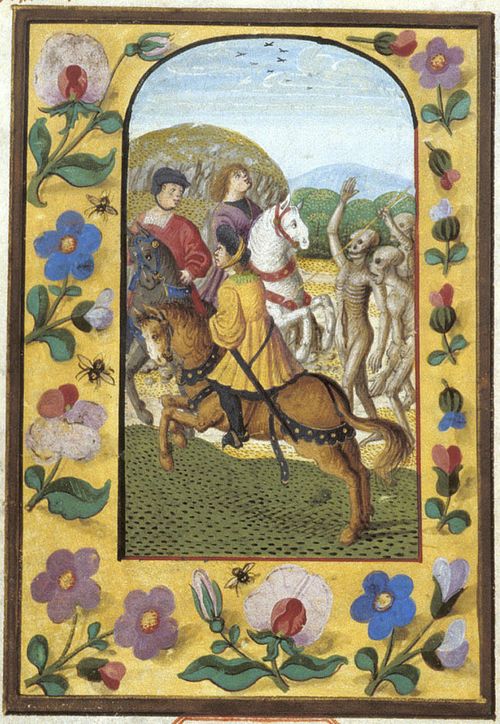 Miniature of the Three Living and the Three Dead on a tipped-in leaf, from a Psalter, Germany (Augsburg?), first half of the 16th century, Harley MS 2953, f. 19v

Thank you so much for this. It's great to have some many images to compare and a great resource for students. It's particularly interesting that the dialogues in the De Lisle Psalter and the Taymouth Hours are in English, rather like a miniature lyric.

I've been writing about a Middle English signs of death lyric on my new blog: http://stylisticienne.com/?p=91

What a wonderful resource for students! Thanks so much.