Slavery and Sainthood in Cornwall

Copied in a scriptorium in Brittany in the early 9th century, this Gospel Book, new to our Digitised Manuscripts site, is referred to as the Bodmin Gospels, or the St Petroc Gospels.  Both these names are references to its place of origin; it was originally used for the swearing of oaths upon the altar of the Priory of St Petroc in Bodmin, Cornwall.  Within these Gospels are recorded 51 grants of manumission (records of the freeing of slaves) which occurred between 950 and 1025.  It is one of the most important records of early Cornish Christianity, and the written records are of great interest to paleographers and students of the Cornish language.  Though they are written in Latin and Old English, many of the names mentioned within them are Celtic, such as Wurci (from Welsh Gwrgi, meaning ‘man-dog’) and Modred (after that well-known villain, King Arthur’s nephew). 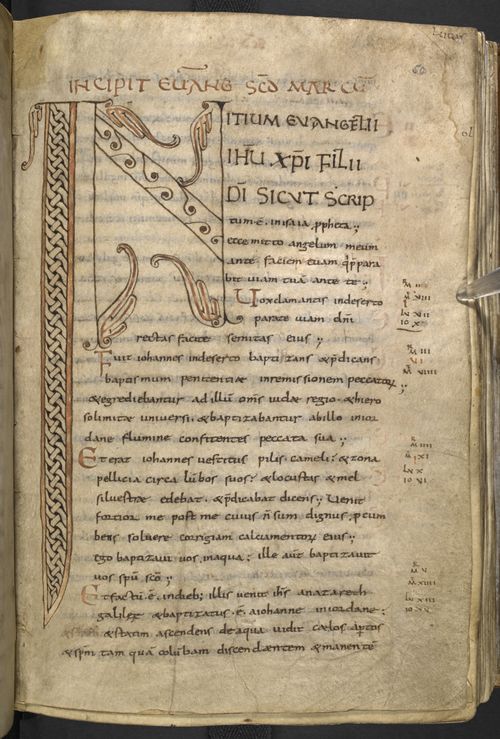 The Priory of St Petroc, Cornwall, was founded by Celtic monks some decades before St Augustine came to England in 593.  According to his legend, Petroc, a Welshman of noble birth, having completed his education in Ireland, set out in a small boat with a few followers towards the middle of the 6th century.  Though filled with zeal, they were an indecisive bunch, as they seem to have had no destination in mind, and so asked God to set their course.  The winds and tides brought them by pure chance (or divine will?) to the Padstow estuary, where Petroc founded his first monastery.  Again, he seems to have had some difficulty in making up his mind, as a short time later he packed up and moved everyone to Bodmin, where he remained until his death at a very great age.  The monastery at Bodmin was recorded in Domesday Book and later became an Augustinian priory. 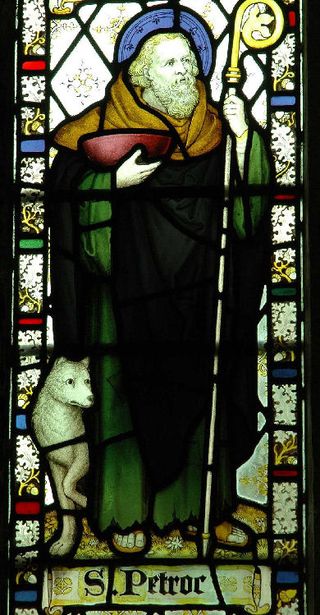 Victorian glasswork of St Petroc of Cornwall, from his church in Bodmin, 19th century.  Image via Wikipedia Commons.

St Petroc is one of the patron saints of Cornwall, and though he may perhaps appear indecisive, his legend is in the swashbuckling tradition, including, at one point, travel to India and the taming of wolves.  He is usually pictured with a stag (not particularly imaginative for a British saint) and his feast day is June 4.  His relics, stolen and carried off to Brittany by a dastardly Breton in 1177, were restored to Cornwall by Henry II, but were then tossed in to the sea when the monastery was sacked in the Reformation.  The beautiful ivory casket in which they were kept survived and is still on display at St Petroc's church in Bodmin.

We know that this Gospel-book (Add MS 9381) was at St Petroc’s monastery from the 940s.  It does not contain elaborate decoration, and is obviously a ‘workaday’ copy; at the end of the manuscript there are tables of Gospel readings for use throughout the year.  There is an unfinished composition at the beginning of John’s Gospel and several large decorated initials in red and brown (see f. 50 above), but no Evangelist portraits. 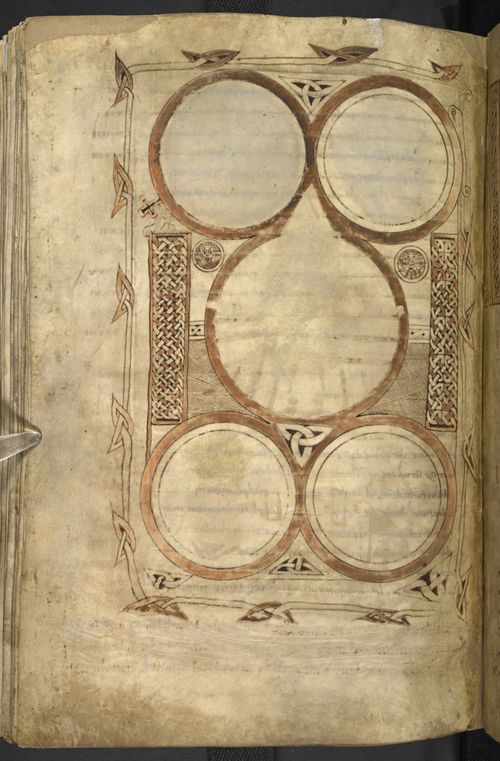 A frame with five roundels and interlace panels, probably intended for a 'Christ in Majesty' miniature, Add MS 9381, f. 108v

The principal decoration is in the Canon tables (ff. 9r-13v), which have Celtic interlace and zoomorphic decoration; see the bird-like creature on the right in image below. A note inserted between the arches records the presence of the book at the altar of St Petroc’s and its use there: 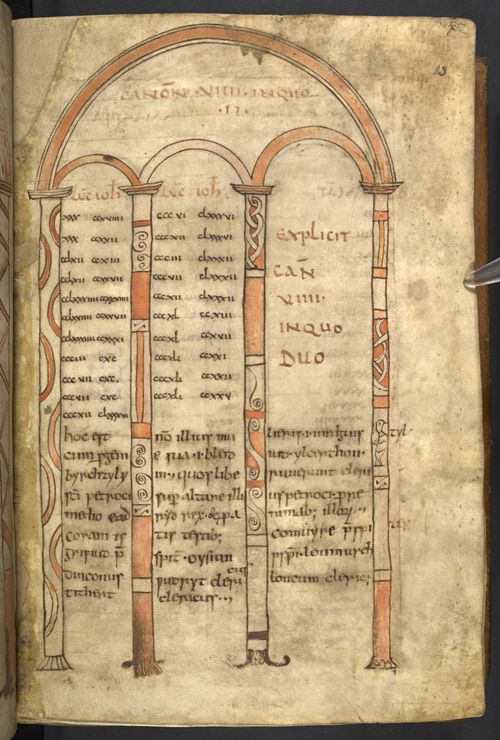 (This is the name of the woman Medguistyl with her offspring Bleiduid, Ylcerthon and Byrchtylym who were freed by the clerics of Saint Petroc on the altar of this St Petroc’s for the souls of Eadred the King and for their souls, before these witnesses, Comuyre the priest etc…)

Of course we know nothing of this woman and her three children, but it does make you wonder what the lives of these slaves would have been like in the ninth century.  Where were they from, how did they come to be slaves, and why were they freed?  We have no answers to these questions.

Sometimes the stories revealed by the records in the margins are a little more detailed, as is the following one in Old English: 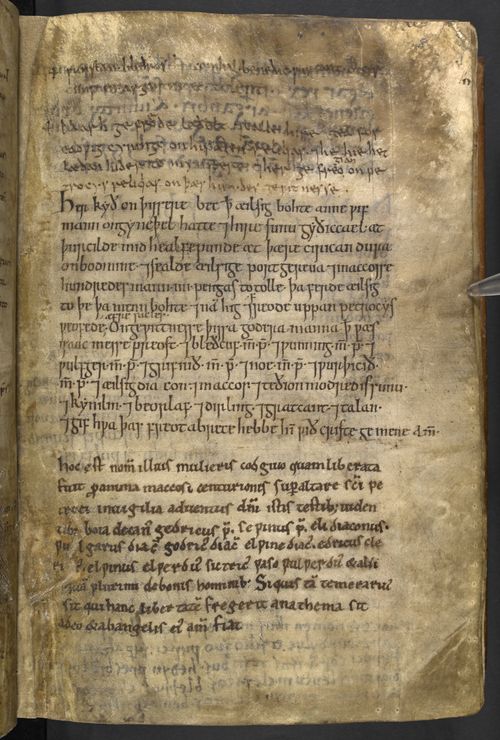 (Here is made known on this book that Aelsig had bought a woman Ongynedhel and her son Gyðhicael from þurcilde with half a pound at the church door at Bodmin, and paid to Aelsige the reeve and Maccos the hundredsman four pennies for toll.  Then Aelsig did what he had bought them for, and freed them on Petroc’s Altar, free of any liability.  On the witness of these good men: Isaac the mass-priest & Bledculf….. And if anyone should violate this freedom, may he lose Christ’s protection. Amen).

This shows that sometimes people bought slaves so that they could set them free and that in this case a toll was paid to the King or his representative for the pleasure of doing so – not terribly magnanimous on the part of His Majesty!

The names are also of interest.  Seven of them are Anglo-Saxon, including the freer of the slave, the reeve and hundredsman - in other words, those in authority, as you would expect.  Aelsige was a very popular name, as it is shared by three people (it does have more of a ring to it than John or David – perhaps it will make the list of the most popular names again one day!). Nine of the names, including the two slaves’, are Celtic and 2 are from the Old Testament - Isaac and Noe, or Noah. 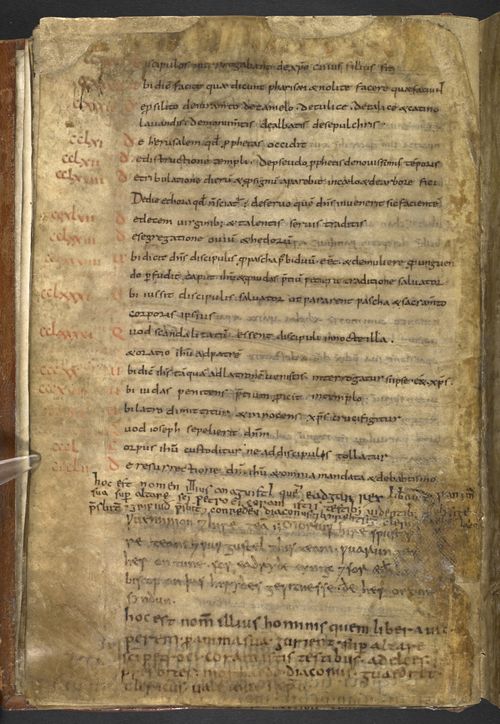 Last but not least, the palaeography of this manuscript has long been of interest to scholars. The original gospels are written in a continental Caroline minuscule, the standard script used in France in this period.  Cornwall, however, was part of the Celtic world and so a form of Insular minuscule was used there in the ninth century.  The earliest manumissions are thought to date from the time of King Edmund (941-946), by which time Anglo-Saxon minuscule seems to have been widely adopted, though there is limited evidence and scripts varied considerably.  The additions in the Bodmin Gospels are mostly in Anglo-Saxon minuscule, but some of the later ones contain perhaps the earliest examples of Cornish Caroline script.  Notable are the Caroline ‘a’ and ‘g’, which are used even in the inscriptions in Old English. The contrast between the scripts is clearly visible in the above image, with additions by three different scribes. The full digital images now available online make this manuscript more accessible for palaeographical study.

No, the name clearly reads "Medguistyl".

Medguistyl's manumission is more correctly (as I read it):

It would be helpful to know the name of the script we are viewing. If this is known, please add it with these lovely examples?
Is that Carolingian?

Dear David Cameron Staples,
Thank you very much for your corrections. We have amended the blog post accordingly.
Best wishes
Chantry Westwell

Thanks for your comment:
In the final part of the blog I discuss the script. There is some discussion about whether it is a very early example of Caroline minuscule. Here are some references I consulted on the script: