As you may have heard, the British Library has recently acquired a unique and richly decorated copy of a medieval mystery play. We're delighted to tell you that the whole is now available, in two volumes, on our Digitised Manuscripts site, as Add MS 89066/1 and Add MS 89066/2. To whet your appetite, here are some more images from the manuscript, and the fascinating story of how it was made. 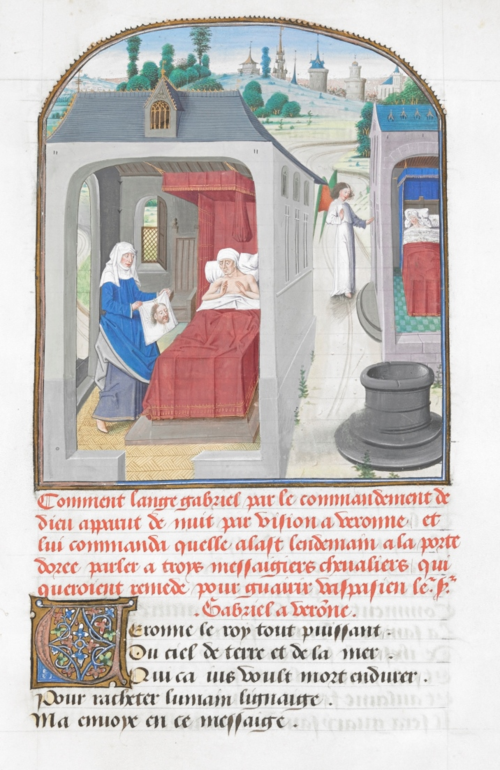 The manuscript was illustrated by Loyset Liédet (b. c. 1420, d. 1479) from Hesdin, in northern France, who may have been a student of Simon Marmion there. In 1469 Liédet joined the book producer’s confraternity in Bruges. He was a favourite artist of the Dukes of Burgundy, and is known to have decorated at least 15 and possibly as many as 20 extant manuscripts, and probably many others besides that are either lost or as yet unidentified. He was a master of colour and narrative, particularly of secular scenes. Liédet’s painting in this book is important for its groundbreaking, inventive and imaginative interpretation of a play, rather than devotional text. Because he was illustrating a new contemporary text, Liédet had to create new scenes corresponding to the text. His creative and novel compositions narrate the text in original ways. 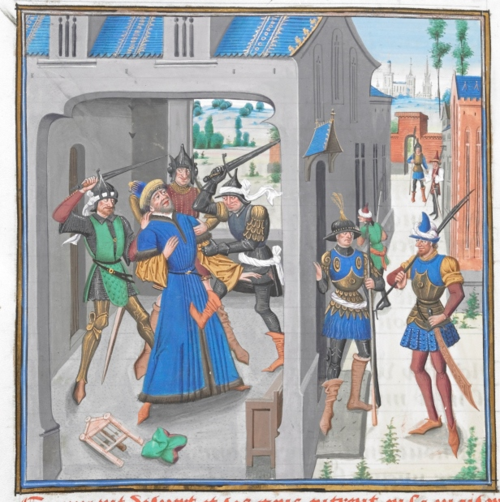 The complexity, innovation and use of colour in Liédet’s cycle of illustrations and his subtlety in the handling of the narrative have few parallels among contemporary manuscripts or panel paintings.

Liédet devised 20 large paintings to illustrate scenes in the play. These are incredibly detailed, and follow the text closely. For example, in the image of two doctors visiting Vespasian, the red spots of leprosy are visible on the patient’s body, and the artist has followed the stage direction Le [deuxième] medicin en regardant son visaige (the second doctor looks at his face) by depicting the doctor looking directly at Vespasian, and holding Vespasian’s hand, possibly to take his pulse (f. 61v, volume 1). These large and unique paintings therefore constitute an important witness of the artist’s skill at illustrating a new dramatic text. 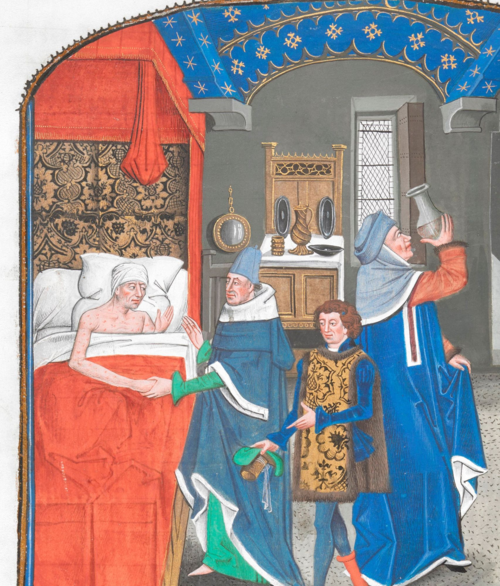 Detail of a miniature showing Vespasian suffering from leprosy and being examined in bed by two doctors (Add MS 89066/1, f. 61v).

Thanks to surviving ducal accounts made after Philip’s death in July 1468, we know exactly how much the manuscript cost, and the name of the scribe and artist. The text was written by the scribe Yvonnet le Jeune, who was paid 16 shillings for each of the 38 quires (£30). The artist, Loyset Liédet (the enlumineur) was paid 18 shillings for each miniature (£18). Each of the 24 large illuminated initials (grandes lettres a champaigne dor et vingnettes dedens) cost 12 pence, for a total of 24 shillings. The binding cost 31 shillings, and the metal fittings for the binding 14 shillings (The original binding and fittings are now lost). The expense to produce the whole book was 51 pounds and 19 shillings. This price can be compared to the cost of a panel painting: in 1464, Dirk Bouts received 200 Rhenish guilders (£33 6s. 8d.) from the confraternity of the Holy Sacrament in Louvain for the painting of a triptych of the Last Supper. In comparison, a senior military officer at Philip the Good’s court, the Master of the Cannon, was paid a salary of 6 pounds a year (although this may have been in addition to room and board at the court).

This manuscript fills a gap in the British Library’s collections of the work of this artist. We already held at least four manuscripts usually ascribed to a ‘follower of Liédet’ (Royal MS 15 D I, Royal MS 17 F VI, Royal MS 17 F VII and Royal MS 18 E V). The acquisition of a manuscript securely attributed to Liédet, and dated to an early period in his career, is an extremely valuable research resource and we very much hope that it will allow these other attributions to be reassessed.

We are extremely grateful to everyone who supported the acquisition of this beautiful manuscript, and we hope that you like it too! The manuscript was accepted by HM Government in Lieu of Inheritance Tax before being allocated to the British Library in 2014. Its acquisition was also made possible thanks to generous donations from the Art Fund, the Friends of the British Library, International Partners in memory of Melvin R. Seiden, the Breslauer Bequest, and other anonymous donors. It can also now be seen in the Treasures Gallery at the British Library -- we hope that you like it as much as we do!

The mirror on fol. 61 v. offers the same kind of reflection that we can find on mirrors and armors depicted on Jan Van Eyck paintings and other early flemish artist (The Arnolfini Bethrotal, for example)!