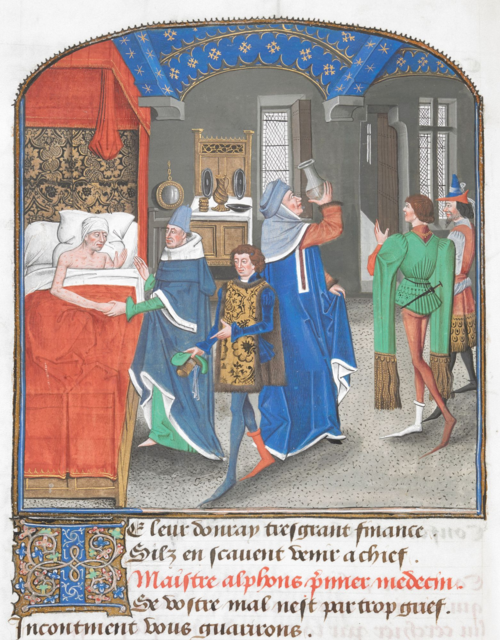 We are extremely pleased to be able to tell you that the British Library has acquired an exceptional manuscript of a medieval drama, made for Philip the Good, Duke of Burgundy (d. 1467). The manuscript in question was accepted by HM Government in Lieu of Inheritance Tax, and contains the Mystère de la Vengeance, a play in French verse by the Benedictine monk Eustache Marcadé (d. 1440). Duke Philip’s copy is one of the finest surviving illuminated manuscripts of any medieval theatrical text, and is now in two volumes: it includes 20 large miniatures painted by Loyset Liédet (d. 1479), illustrating the Roman destruction of Jerusalem. This manuscript is of outstanding significance as a unique copy of the complete version of a theatrical text illustrated in a completely original way, and as an example of a securely dated and documented work made for one of the greatest patrons of the 15th century. 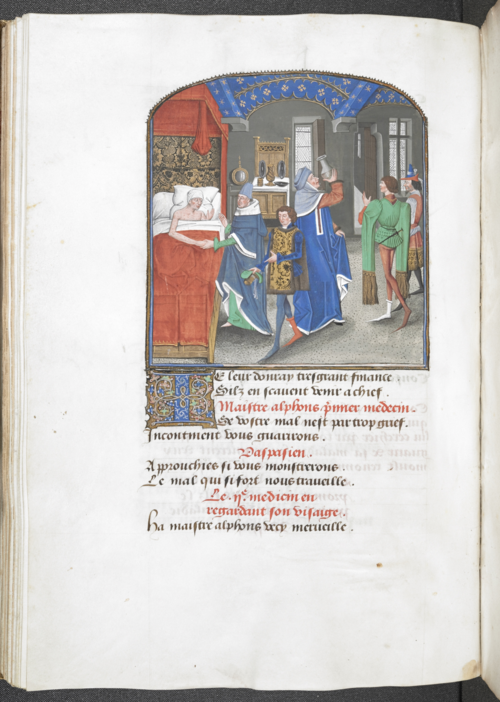 The newly-acquired manuscript was commissioned for Philip the Good in around 1465. Philip was the most powerful ruler in Europe at that time, and one of the great collectors of the 15th century. The British Library's copy is the only known surviving complete manuscript of Marcadé’s text of the mystery play, in a version that took four days to perform. Another copy is in Arras, Bibliothèque municipale, MS 697, but that is a three-day version of the play, and contains around 1,000 fewer verses than Philip’s copy. Nor is the Arras copy illustrated with paintings, but rather with pen and ink drawings, and it is written on paper rather than on parchment. The play was performed in Abbeville, around 30 miles south-west of Hesdin, in 1463, and in Mechelen in 1494. It has been speculated that the Duke of Burgundy was present for the Abbeville performance, and that this deluxe manuscript was made in response to that event. 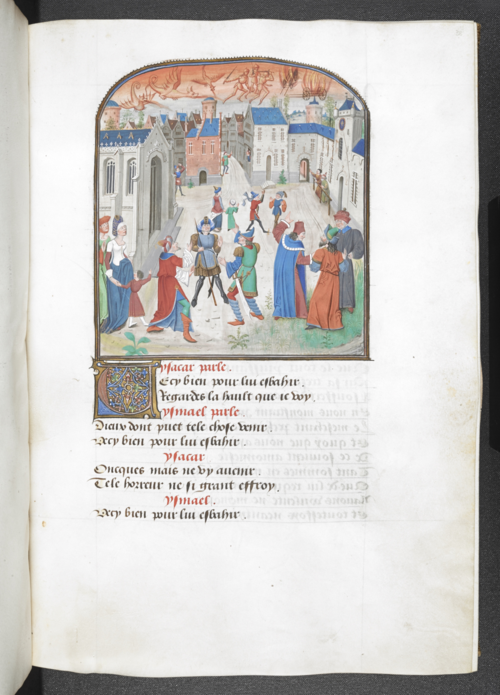 Detail of a miniature showing the appearance in the sky of portents of Jerusalem’s destruction, from the Mystère de la Vengeance (London, British Library, MS Additional 89066/2, f. 38r).

The Mystère de la Vengeance contains 14,972 lines of French verse, which is set over four days of performances. Its subject is the Roman destruction of Jerusalem after the Crucifixion. The first day’s drama is a debate between the personifications of the Four Virtues, Justice, Mercy, Peace and Truth over whether God should take revenge on Jerusalem for the Crucifixion. The result is a promise from God that any destruction would be preceded by many warnings. On the second day the Emperor Tiberius hears a letter read from Pontius Pilate concerning Christ’s miracles. Concurrently, Vespasian, suffering from leprosy in Spain, is cured by the Vera Icon, or Saint Veronica’s veil. Events in Rome on the third day of the performance include Nero sending Vespasian and his son Titus to Jerusalem to put down a revolt. The ‘year of the four emperors’, 69, is the subject of the last day’s performance, in which Vespasian orders the destruction of Jerusalem.

The manuscript was accepted by HM Government in Lieu of Inheritance Tax, and allocated to the British Library in 2014. Its acquisition was also made possible thanks to generous donations from the Art Fund, the Friends of the British Library, International Partners in memory of Melvin R. Seiden, the Breslauer Bequest, and other anonymous donors.

For more information about the artist and scribe of this manuscript, see our blogpost Magical Mystery Tour.

Posted by Ancient, Medieval, and Early Modern Manuscripts at 11:39 AM