A new addition to Digitised Manuscripts comes in the form of Add MS 50005, a Book of Hours in Dutch, which the British Library acquired from the Dyson Perrins collection in the 1950s.  The core of the book was written by one hand, c. 1410-c. 1420, perhaps in Utrecht or Delft.  It contains devotional texts such as the Hours of the Virgin and the Little Hours of the Cross, as well as prayers to the Virgin Mary and Christ, the Crucifix and God.  Whereas Books of Hours made in England or France would have been written in Latin, this example is written entirely in Middle Dutch.  Nor is it unusual; most Books of Hours from the Netherlands are written in the vernacular. 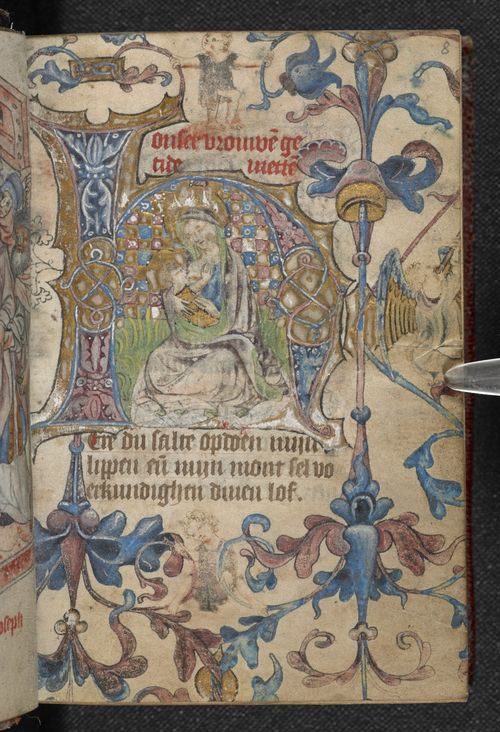 The use of Dutch in this way was the outcome of a religious movement known as the Devotio Moderna, which sought to encourage a personal, emotional style of devotion that was accessible to all literate people.  This Book of Hours is decorated with a series of 66 miniatures illustrating scenes from the lives of Joachim and Anna, their daughter the Virgin Mary, and her son Jesus Christ.  The miniatures are lively and expressive: the characters are shown moving, gesturing or performing ceremonial duties.  Being unframed, this sense of activity spills out into the margins, drawing the scenes and the text closer together. 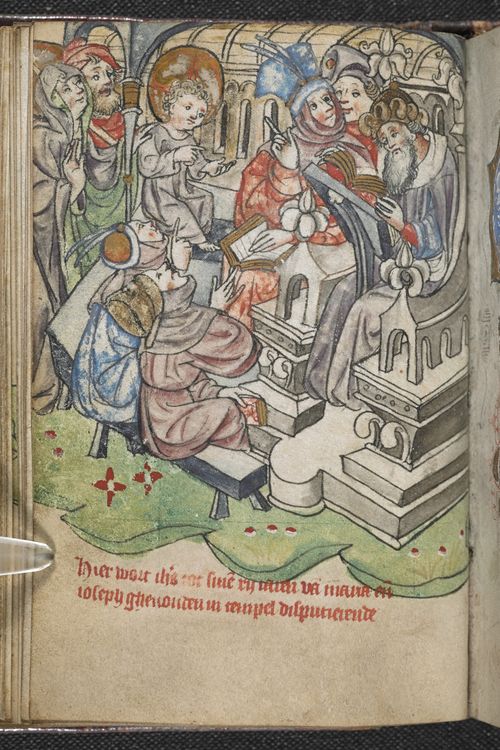 The miniatures can also be visceral and unsettling.  On f. 59v, under the orders of Herod, and unmoved by the pleas of its mother, a soldier is stamping on an infant and impaling it with his sword; the child’s blood is shown spilling over his boot and onto the grass.  On f. 106v, Christ is tied to a pillar; his torturers are captured mid-swing, one lifting his whip above his head, the other poised to strike a sideways blow on Christ’s already lacerated body, while Pilate is standing in the background, looking on impassively.  The captions directly address the reader and employ the dramatic present tense to pull them into the action: ‘Here does Herod kill the innocent children’; ‘Here they scourge Jesus’. 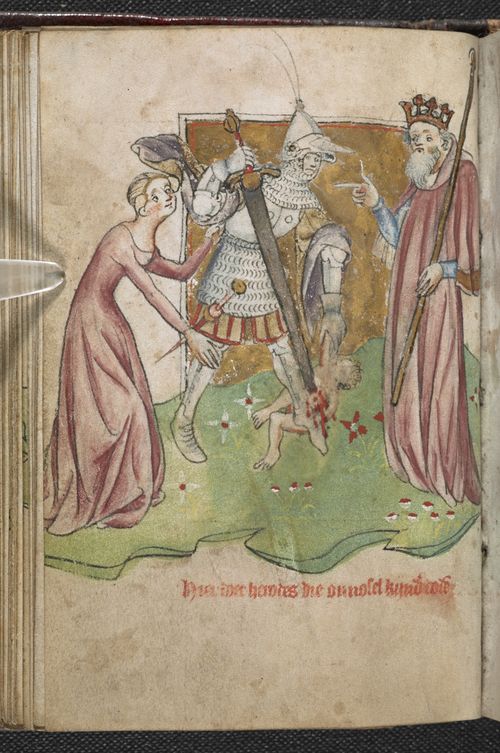 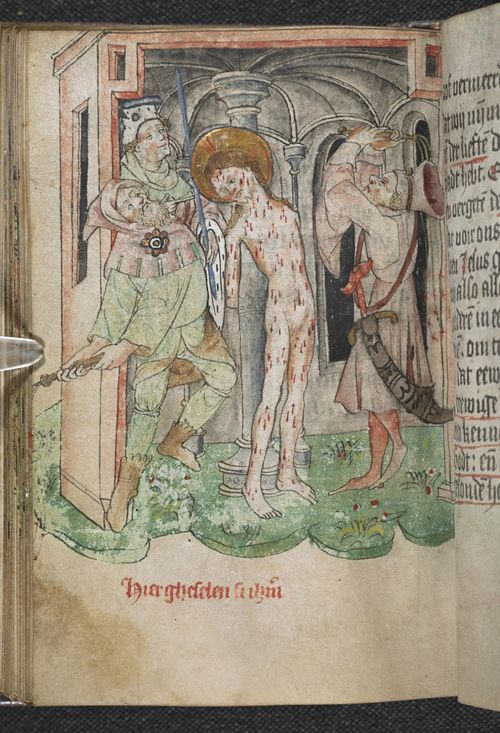 The artist responsible for these miniatures has been identified by James Marrow as ‘The Master of the Morgan Infancy Cycle’.  He is named after his work in M. 866 at the Pierpont Morgan Library, and he is known only through other decorated Books of Hours: Liège, Bibliothèque de l’Université, MS Wittert 35; Utrecht, Universiteitsbibliothek, MS 5.J.26; Berlin, Staatsbibliothek Preussischer Kulturbesitz, MS Germ. oct. 680; and Berlin, Kupferstichkabinet, no. 2302 (a single detached miniature). The insertion of other texts by other hands in this book presents not only a challenge to the boldest manuscript cataloguer, but also insights into how medieval Books of Hours could be customised and augmented.  The book was added to in two stages during the fifteenth century.  The first additions were made around the mid-fifteenth century, almost entirely on the blank recto sides of leaves containing miniatures on the verso.  The interspersing of new texts among the old seems confusing to modern eyes, but it reflects the emendator’s thoughtful approach to what would be appropriate in the book. 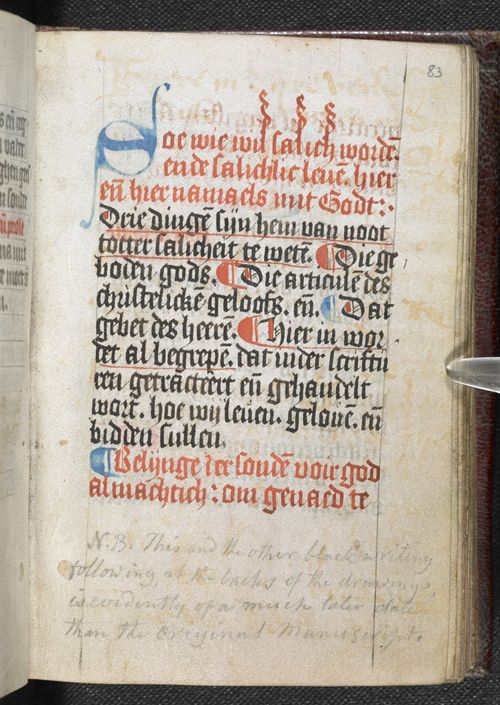 A note on three things necessary for salvation, the first page of additions made by ‘Hand 2’ in the mid-fifteenth century, Add MS 50005, f. 83r.

Placing some of the inserted prayers on blank leaves at the front of the volume would have avoided the chopping and changing between texts from f. 95r to 138r, but it would have upset the textual hierarchy by moving the Hours of the Virgin to second place in the volume.  The emendator began his or her additions immediately after this most important text in the volume, slotting them among the Little Hours of the Cross so that the new prayers were grouped with those originally placed in the volume. 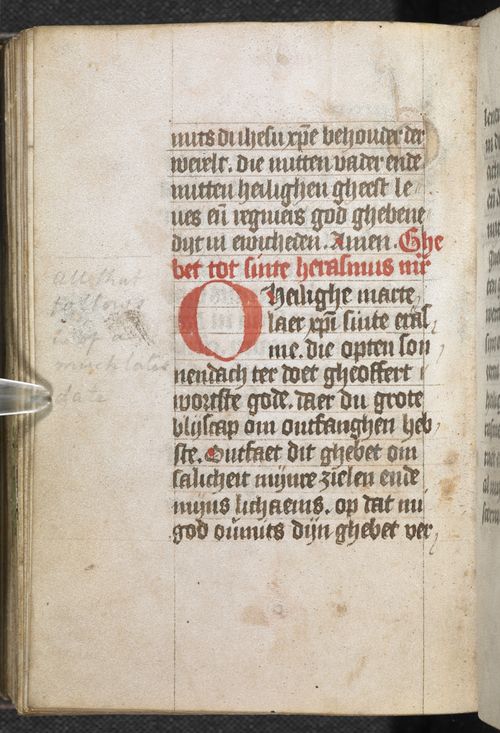 A prayer to St Erasmus (‘O heilighe martelaer Christi sinte erasme’), the first page of additions made by ‘Hand 3’ in the second half of the fifteenth century, Add MS 50005, f. 159v.

The second additions were made later in the fifteenth century, more straightforwardly to blank leaves and possibly inserted quires at the end of the volume.  Whereas prayers found earlier in the volume are directed to God, Christ, or the Virgin Mary, these address a variety of saints – St Erasmus, St Katherine, St Agatha, St Stephen, St Agnes and St Francis – that might reflect the particular devotional interests of the book’s owner.

Miniature of a laywoman kneeling in prayer before the Virgin and Child, Add MS 50005, f. 155v.

There is no firm evidence of provenance in the manuscript.  The final miniature depicts a laywoman – perhaps the original owner of the book – kneeling in prayer before the Virgin and Child.  A similarly dressed figure is shown attending upon Anna at the birth of Mary (f. 5v), and upon Mary at the birth of Jesus (f. 22v), sitting with the shepherds at the Annunciation (f. 36v), greeting the Magi at the Adoration (f. 45v), and holding a bell-rope at the Purification (f. 46v). 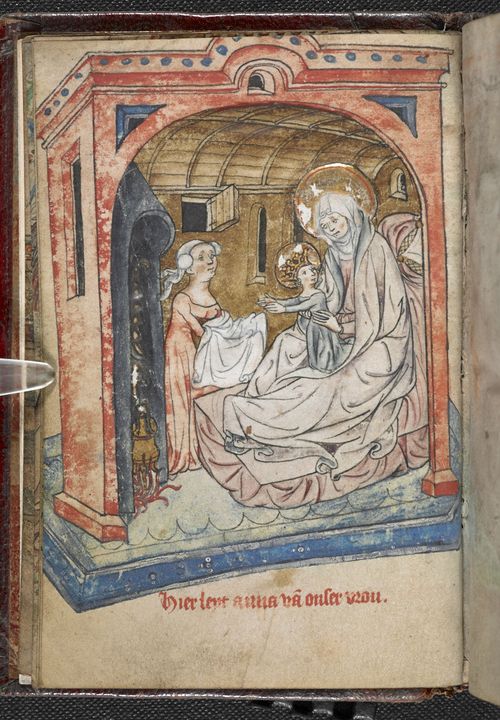 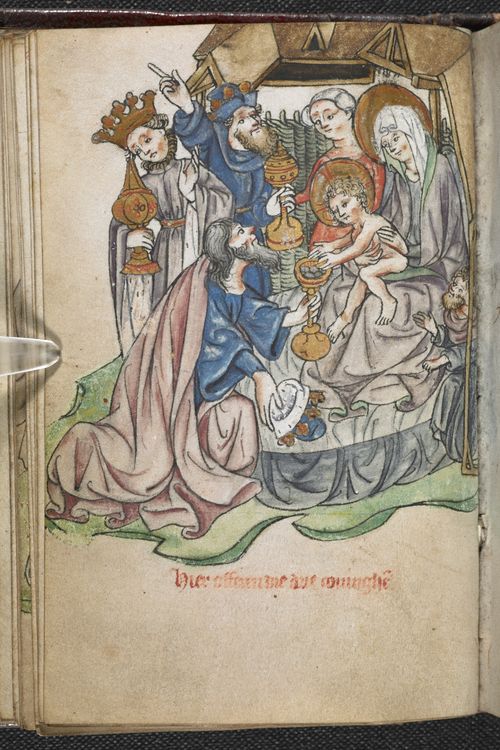 The book seems to have remained in female possession, perhaps belonging a Sister of the Common Life, one of the pious lay groups associated with the Devotio Moderna.  An exhortation on the Passion is addressed specifically to a sister – ‘O mijn gheminde suster’ (‘O my beloved sister’, f. 162r) – and includes the phrase ‘soe moecht ghi een ghewarich dienster Christi worden’ (‘may you become a true servant of Christ’, ff. 164r-164v).  It was with this goal in mind that the many owners of this and other Books of Hours pored over their precious manuscripts, reciting the prayers and meditating upon the suffering of their Saviour.