The Enemy of All Marriage

Last week, we announced that two important manuscripts had been saved for the nation by the British Library.  One of these – a printed book filled with the manuscript notes of the religious reformer John Ponet (b. c. 1514, d. 1556) – has been digitised in its entirety, and is now available for all to study and enjoy through Digitised Manuscripts (the book is Add MS 89067).  It joins another book annotated by Ponet in the British Library collections: a copy of the 1534 edition of the Historia Danorum Libri XVI (590.k.10).

John Ponet began his career at Queen’s College in Cambridge, where he graduated as Master of Arts in 1535.  Yet no quiet life of scholarship awaited Ponet.  A highly articulate advocate of reformed religion, and an inveterate controversialist to boot, Ponet placed himself at the centre of contemporary doctrinal debates, including the question of whether priests should be permitted to marry.  Like Thomas Cranmer and Matthew Parker, Ponet took a wife well before clerical celibacy was swept away.  He was later arraigned on charges of bigamy, his wife being already betrothed to a Nottingham butcher; he eventually divorced her and married another woman. 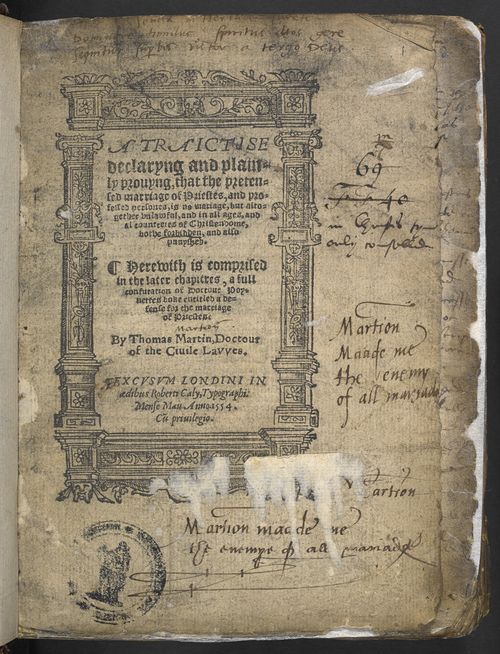 This book, published in 1554, is entitled A Traictise declaryng and plainly prouyng that the pretensed marriage of Priestes and professed persones is no marriage, but altogether unlawful, and in all ages, and al countreies of Christendome bothe forbidden and also punyshed.  Written by Thomas Martin, a civil lawyer of conservative religious standing, this book represents an attempt by the regime of Mary Tudor to give intellectual justification to the undoing of doctrinal changes effected during the reigns of Henry VIII and Edward VI.  Five years earlier, in the year that clerical celibacy had been abolished by act of parliament, Ponet had published A Defence for Mariage of Priestes, by Scripture and aunciente wryters.  Already married himself for at least a year, Ponet set out why ‘marriage and priesthood may stand together’ and how ‘marriage is no hindrance to a godly life’, drawing heavily on St Paul’s advice to the Corinthians to marry in order to avoid the sin of fornication. 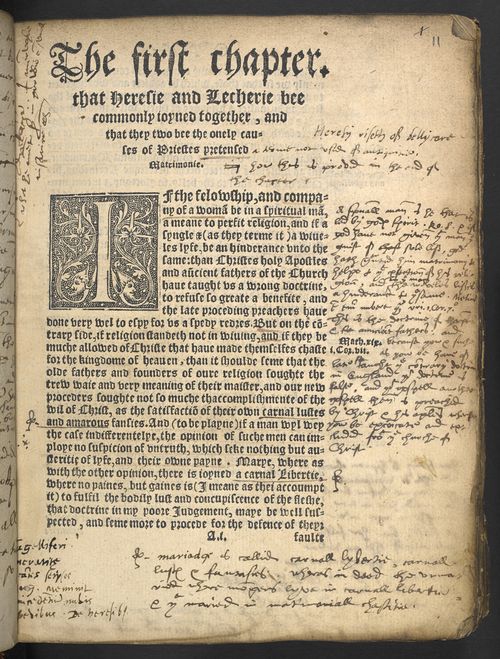 Opening of the first chapter, with Ponet’s annotations in English and Latin in the margins, Add MS 89067, f. 11r

It is Ponet’s extensive manuscript notes alongside the Traictise – in the margins and on blank leaves specially inserted into the book – that transform this book into a witness of the personal battles taking place within religious controversies of the mid-sixteenth century.  Ponet’s rise to the bishopric of Winchester in 1551 had been at the expense of its former bishop Stephen Gardiner.  It is probably no coincidence that the author of the Traictise was employed by Gardiner in his new role as Mary I’s Lord Chancellor.

Declaring on the title-page ‘Martin made me an enemy of all marriage’, Ponet left few leaves unmarked, writing notes in English, Latin and Greek that comprise a blow-by-blow response to the Traictise.  Ponet was evidently keen to garner scurrilous gossip to pepper his response with some ad hominem remarks: ‘Martin played always the fool in Christmas in New College, Oxford’, he noted (see above). 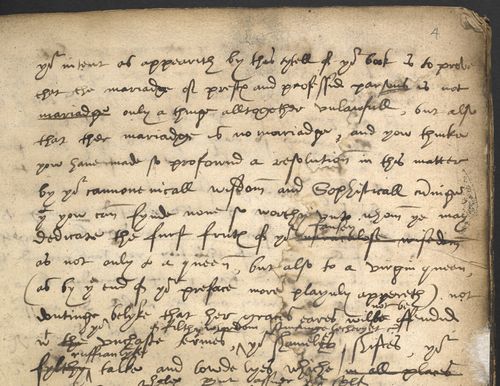 He often directly addressed Martin in his annotations: ‘Your intent, as appearing by this title of your book, is to prove that the marriage of priests and professed persons is not marriage...you think you have made so profound a resolution in this matter by your canonical wisdom and sophistical cunning...ye may dedicate the first fruits of your fancy as...to a queen...not doubting belike that her grace’s ears will not be offended with your unchaste terms of filthy whoredom, your shameless shifts, [...] lechery et cetera, your ruffian-like talk and loud lies...’.

Warming to his theme, Ponet continued, ‘Though the queen be contented with whatsoever you say, yet will learned men overlook you and judge what you ought to say, it is not your net that can hide your nakedness when you dance now as it was when you used to play in New College in Oxford the lords minion fool in Christmas.  Belike there you learned your boldness and lost your wit and did then put off shame and put on impudency...’.

Referring to the sacking under Mary of clerics who had legally married under Edward, Ponet wrote, with some sarcasm, ‘Now Mr Doctor ye must make some foul shift for your clients which be put in the possession of such men’s benefices as be deprived without a cause if your sayings be true...’.

Ponet predicted that unrest would follow these changes, with attacks made both against priests’ replacements and those responsible, not least because of perceived foreign influence through Mary’s marriage to Philip II: ‘...if now you and your Spanions help not at a pinch, all such new beneficed shavelings [i.e. inexperienced young men] shall be thought to live in open extortion and wrongfully to withhold other men’s goods, for the which great damage is like to ensue not only to them but also to all such as have put out the one without a cause.’ 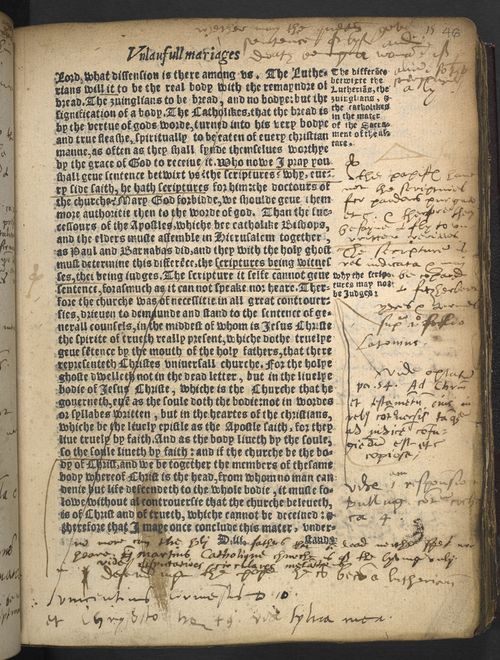 Ponet evidently saw the hand of his old adversary Gardiner at work in Martin’s Traictise.  His notes in Add MS 89067 formed the basis of his response, published in 1556, An Apologie fully answeringe by Scriptures and aunceant Doctors, a blasphemose Book gathered by D. Steph. Gardiner...and other Papists...as by ther books appeareth and of late set furth under the name of T. Martin Doctor of the Civile lawes...against the godly mariadge of priests.  Yet this new acquisition contains many other annotations by Ponet that were never printed and remain to be studied in detail.  It thus offers fresh insights into a disputatious and very personal exchange during a febrile period in England’s religious history.

Unrelated, but I came across an image (presumably from a medieval manuscript of one sort or another) and was wondering if you might know what manuscript it's from, since my searches have yielded naught.