The Legacy of St Patrick

The story of Patrick, patron saint of Ireland, is well known: how, as a young man, he was kidnapped from Britain and spent years enslaved as a shepherd in Ireland; and how, after escaping home, he returned to convert the Irish to Christianity. On this St Patrick’s Day, we thought we’d tell you a bit about some of the British Library’s holdings that relate to the life and legend of the saint himself. 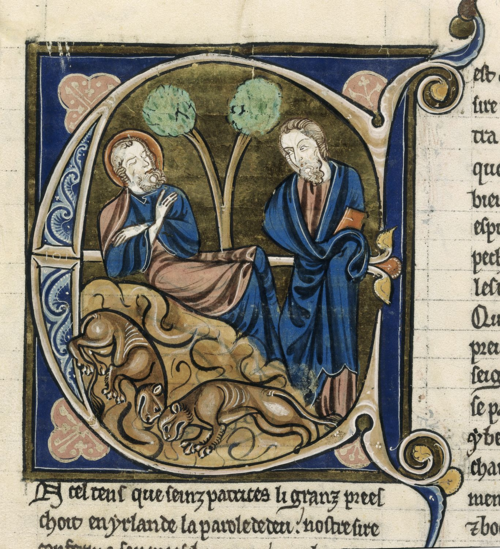 Two surviving Latin works are now generally believed to be by Patrick, namely the Confessio and his letter to Coroticus. These works are preserved in 8 manuscripts, and one of them is held here at the British Library: Cotton MS Nero E I, part I, ff 169v-174v, contains the Confessio followed by Patrick's letter to Coroticus among a collection of other saints' Lives, copied at Worcester Cathedral Priory in the 2nd half of the 11th century. You can view the Patrick sections of this manuscript, together with all the other manuscripts of Patrick’s works and much more, on the marvellous Saint Patrick’s Confessio website hosted by the Royal Irish Academy.

Patrick was an extremely popular saint throughout the Middle Ages, and was frequently depicted in medieval art. Above is an example taken from a lavishly-illuminated volume of the Lives of the Saints, showing Patrick asleep on a knoll. Next to him is a figure holding a book, who has not so far been identified.

Here is a second example, also from our Royal Manuscripts collection: 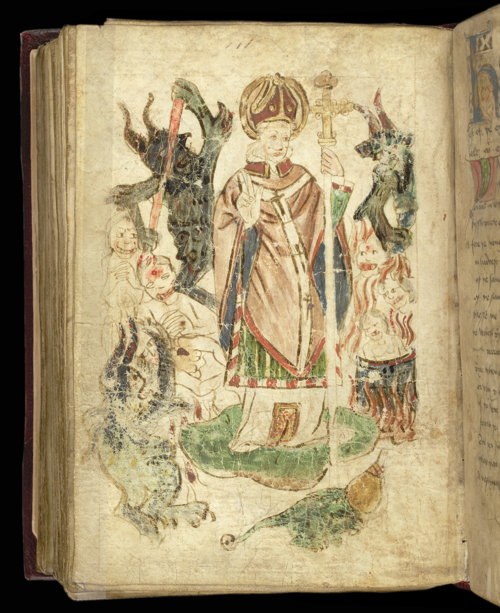 This image comes at the beginning of an account of a vision of St Patrick in Purgatory, as seen by William Staunton of county Durham on Friday, 20 September 1409 (ff 133r-148v). It is one of a number of medieval accounts of St Patrick’s visit to Purgatory, the entrance to which was located, according to legend, on Station Island in Lough Derg. Unusually in this image, the depiction of Patrick in Purgatory is combined with an image of Patrick trampling on a snake, a reference to the traditional belief that Patrick drove the snakes out of Ireland.

Patrick’s popularity is also reflected in the numerous later stories, poems and hymns about him written in Irish. There is not space here to detail all of them (you can find a full list in the Index to the Catalogue of Irish Manuscripts in the British Museum), but it’s worth noting the numerous instances of the Ossianic poems Agallamh Oisín is Pádraig (The conversation of Oisín and Patrick) found in later manuscripts, and also the important Egerton MS 93, a 15th-16th century manuscript containing the Tripartite Life of Saint Patrick.

A fitting place to end our survey is this translation of the Latin couplet on the saints buried at Downpatrick, from Egerton MS 146, f 117v (18th-19th century):

Rendered into Irish as

(Three saints are lying in one grave in this stronghold, the famous St Patrick, St Colum Cille and Brigid.)

Happy St Patrick's Day, wherever you may be!