The Vikings and the British Library

When you think of Vikings, what's the first thing that comes into your mind? Horned helmets? Longships with dragon-headed prows? Kirk Douglas? Then think again, because our friends at the British Museum have opened a new exhibition, Vikings: Life and Legend, which aims to debunk some of the myths which have grown up around these medieval Scandinavian seafarers. 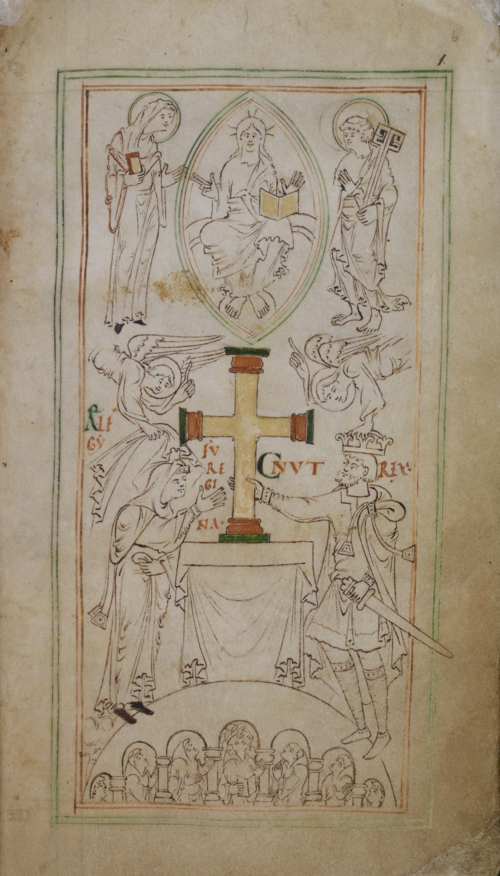 The British Library is delighted to be a lender to this show, which is open in London until 22 June 2014. On display at the British Museum is an 11th-century manuscript from our collections, depicting King Cnut and his wife Emma standing before the altar of the New Minster, Winchester. Cnut (also known as Canute or Knútr) was ruler of a vast Scandinavian sea-kingdom, encompassing England (from the year 1016), Denmark (from 1018), Norway (from 1028) and parts of Sweden. Emma (also known as Ælfgifu) had previously been the wife of King Æthelred the Unready of England (r. 978-1016). The manuscript in which they are depicted contains the names of the brethren and benefactors of the New Minster, and was probably begun in the 1030s. The whole book, Stowe MS 944, can be seen online on our Digitised Manuscripts site; but we also hope that as many of you as possible will take the opportunity to see it on show this spring and early summer at the British Museum. And you can read more about the image itself here.

Posted by Ancient, Medieval, and Early Modern Manuscripts at 10:46 AM