The 2014 Masters starts at Augusta this week (that's golf for the uninitiated). And what better way to kick things off -- to mangle a sporting analogy -- than with this famous image from the Golf Book. The modern game of golf has its origins in 15th-century Scotland, when King James II had it banned, in order that his subjects should devote more of their time to practising archery. There were, however, other ancient and medieval games which resembled the game of golf, from China, Persia and Rome, among other places. Some say that golf developed from cambuca (chambot in French), a game played with a stick and a wooden ball that was taken up in the Low Countries and Germany. 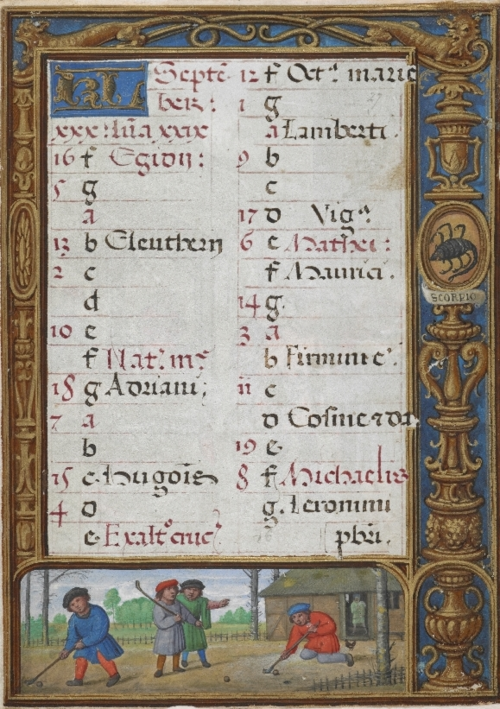 We very much doubt that the modern golf professionals playing at Augusta will care for these niceties. But they might be interested to see this page from the British Library's Golf Book (Add MS 24098, available in full on our Digitised Manuscripts site). We have featured this manuscript before, most notably as our calendar for 2013 (see the month of September) and in the post A Good Walk Spoiled. The splendid book in question was made at Bruges around the year 1540, and the illumination is attributable to the famous Simon Bening (d. 1561) and his workshop.

You may wonder if the players in the bas-de-page scene are engaged in golf or in a game similar to cambuca. But we do suspect that the name "the Cambuca Book" would never have taken on, don't you agree? Watch out for those flying golf balls ...