My Kingdom for a Horse

Recently we had an enquiry about an unusual image that appears in the Rochester Bestiary.  This famous English book of beasts, which dates to the mid-13th century, has featured quite prominently in our ongoing series about medieval animals; have a look at our posts about lions, beavers, dogs, wolves, elephants, and hedgehogs, for example.

The particular miniature in question can be seen below.  ‘Why,’ asks our slightly tongue-in-cheek correspondent, ‘are those horses having a cuddle?’. 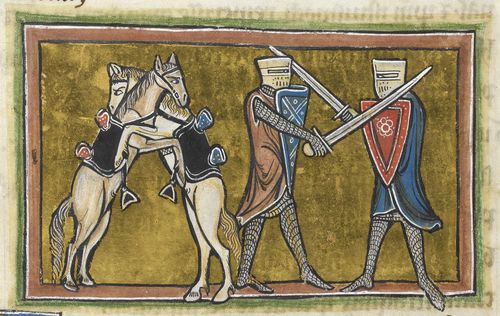 At first glance, it certainly does appear that this is what’s going on here.  We are sad to report, however, that the truth is not quite so full of squee – rather than cuddling, these horses are in fact fighting one another.   An inscription in French intended to guide the illuminator can be found beside the miniature, telling us that it is meant to represent two knights and two horses engaged in combat (see below for a detail of this inscription). 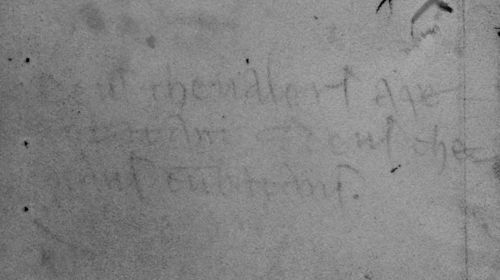 Detail of an inscription beside the miniature of the two horses and two men, altered to increase legibility, Royal MS 12 F XIII, f. 42v

This is a fascinating scene, and as far as we can tell, a unique one among bestiary images.  The Rochester Bestiary is notable in that the miniatures illustrating each animal appear at the end of the relevant section, rather than at the beginning (for an example of the latter, see the Royal Bestiary:  Royal MS 12 C XIX).  The Royal Bestiary gives us a much more typical example of the kind of horse to be found in the book of beasts: 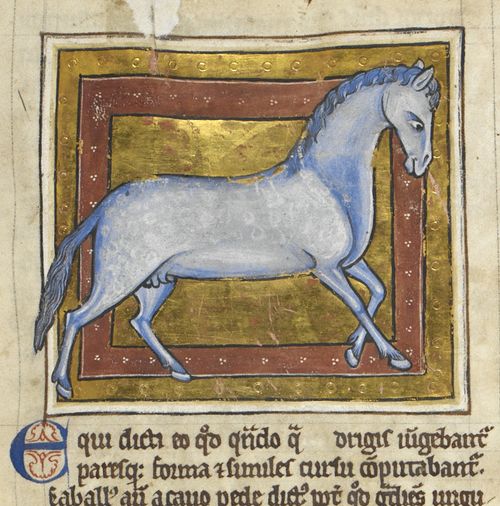 A horse (of course) was an animal that every medieval reader would have been familiar with, and so most bestiaries depict the animal just as they are, with little in the way of drama or exposition in the scene.  The Rochester miniature is different, although we're not sure why.  However, there are a few clues – albeit indirect ones – in the text preceding this fascinating scene.

Horses in the early medieval period were largely the possessions of the aristocracy and warrior classes, and the bestiary text reflects their crucial role in battle.  Horses, we are told, rejoice in winning and are disheartened by defeat, and some can become so carried away that they will bite their enemies whilst fighting.  But most importantly, a noble horse is loyal to his noble master, will ‘suffer no one except their master to ride them’, and will weep at the death of its owner.  Amongst many examples of loyal horses, the bestiary text provides us with the story of the horse belonging to the king of the Scythians.  This king was killed in single combat, and when his opponent tried to divest him of his armour, the king’s horse attacked, biting and kicking until he was killed himself.

This is not exactly what is going on in the Rochester scene, but it’s as close as we can come.  We have here a depiction of a story that is not reflected in any of the canonical bestiary texts – nor any others that we have yet uncovered.  We see two horses so faithful to their masters that when the warriors are fighting, the horses mirror their aggression and attack one another.  Whether this scene is reflective of a parallel narrative tradition lost to us today or simply an artist’s unique interpretation of the instructions left for him remains to be determined.

I am very disappointed by the bellicose nature of these horses. I hoped they were giving each other a hug and saying "Look at these two! Humans, eh? Always willing to smash each other's head. Could have gone for a pint instead..." But then it would have been Rochester Bestiality, I think. Or is it bestiality only when a knight becomes rather amorous towards his horse (instead of smashing an opponent)?

Remember that Bucephalus used to help Alexander the Great during the battles, biting the other horses… I don’t know if Antiquity left us some pictures…

It's interesting too that these horses are not obviously stallions. When you look at many medieval illustrations the horses in question are frequently and very clearly virile males. Obviously the illustrator chose not to portray them as such,