As was the case for the souls condemned to Hell in Dante’s Inferno (described in our previous post No Rest for the Wicked), the punishment for those in Purgatory matches the crime.  But, unlike Hell, the punishments in Purgatory were intended to improve and purify the souls in question, those who could be saved but still needed a little improvement before making their way to Heaven. In one of the first scenes in Purgatory,  the proud bear great stones upon their backs (see below).

Could the artist of this manuscript know that Dante included among the proud one Oderisi of Gubbio, a famed illustrator of illuminated manuscripts who took a little too much pride in his work!  Is this a warning to all of us who work in the field of manuscripts studies? 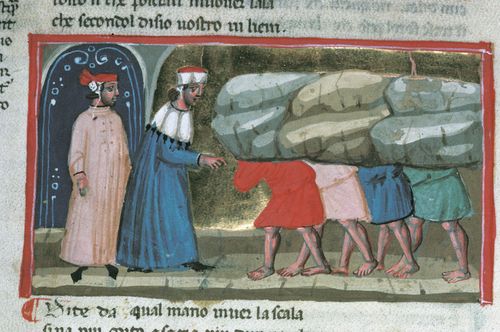 In Purgatory, the avaricious and greedy are shown lying face down on the ground.  Dante meets Pope Adrian V here.  Dante certainly wasn’t afraid to take the powerful to task for their misdeed – he even sent another Pope, Boniface VIII, straight to Hell! 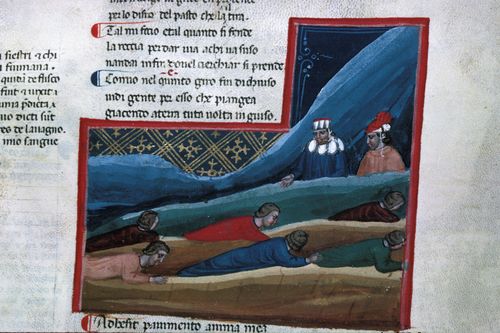 After passing through much of Purgatory, Dante, Virgil and another poet, Statius, must pass through a wall of fire to be worthy of reaching the Earthly Paradise, or the Garden of Eden, at the summit of Mount Purgatory (see below). 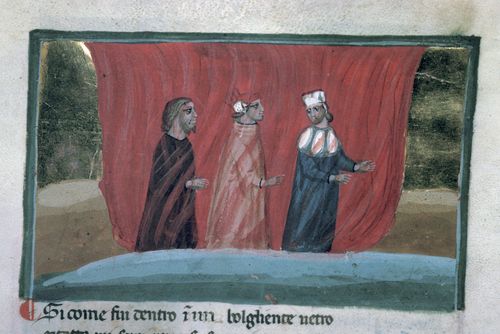 Below can be seen the Garden of Eden; Dante (and the capable artist of this manuscript) drew on some unusual biblical imagery to depict the Four Evangelists here as four-headed creatures.  As the three observers in the Garden of Eden look on, a parade of Christian symbols pass them, re-enacting the drama of salvation – much like the parades that would have proceeded through Florence on every holy day.  This parade seems to be building up to something… we sense someone important is on the way, but who could it be? 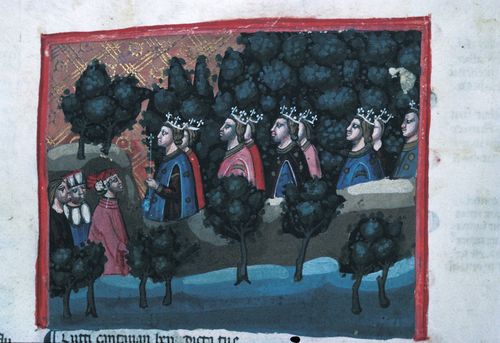 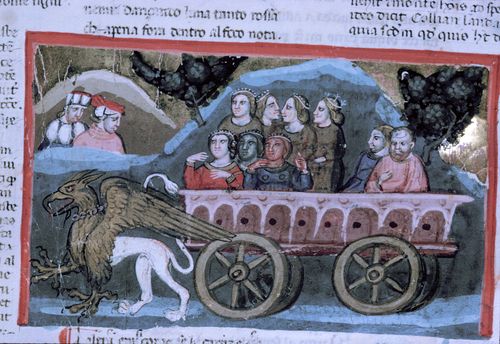 It is Beatrice Portinari, in a chariot drawn by griffins!  Beatrice was Dante’s muse and true love, despite the fact that they only met twice in real life (and those encounters were more or less in passing).  It is here that many begin to feel a certain distance from the poem.  Dante of course wrote in the tradition of courtly love, where the beloved was meant to be entirely unattainable, but it is difficult for the modern reader to be terribly sympathetic about Dante’s deep longing for Beatrice, considering she probably had no idea who he was.  One also can’t help but feel some sympathy for Dante’s poor wife Gemma di Manetto Donati; she never got a single mention in any of his poetry (so it’s no wonder she didn’t accompany him when he was forced out of Florence!).

Note that Dante seems a little apprehensive in the miniature below.  It almost appears as though he’s being dragged along; could it be that he senses that Beatrice isn’t very pleased to see him? 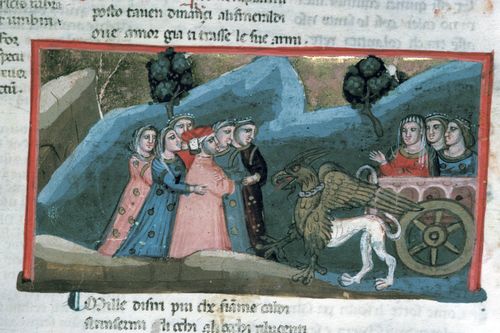 Poor Dante.  He has travelled all this way to get to his lady-love and she greets him with anger.  Many consider this to be the funniest bit of the Purgatory – Dante cowering like a hen-pecked husband while Beatrice brutally scolds him for his conduct.  She tells him that was sent by God so that her physical perfection would inspire him to contemplate the beauty of the divine, but instead he got distracted and chased after other girls.  Though she’s presented elsewhere as an idealised and static muse for Dante, our manuscript’s artist perfectly captures something of Beatrice’s fire in this scene.

This moment really is the dramatic climax of the poem as a whole.  The meeting with Beatrice represents a chance for everything Dante longed for most, forgiveness for his sins, and a final reconciliation with his love. 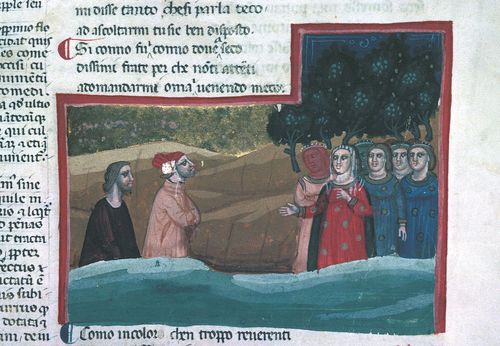 Dante is so contrite (and a little pathetic) that Beatrice eventually forgives him, and takes over from Virgil as his guide into the highest reaches of Purgatory and on to heaven.  Dante’s adoration of Beatrice as they travel in the poem is so touching that we can almost forget the strangeness of their real-life acquaintance.  Their second and final meeting, we are told, took place on a bridge in Florence, when Beatrice passed Dante by chance and smiled at him. That single moment was enough for Dante to make Beatrice’s smile the very image of divine beauty.  Heaven is simply full of smiles and laughter, in the Paradiso, the third and final act of the poem.