When we last left Dante, he had met with his muse and lady-love Beatrice in Purgatory, and we were beginning to escort him into the third and last realm of the Divine Comedy – that of Heaven, or the Paradiso (see here for our previous posts about the Inferno and the Purgatorio). 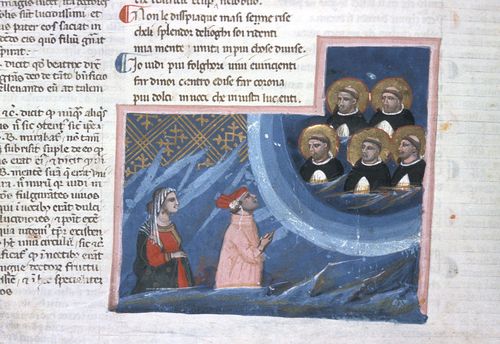 It is worth noting how the style of the artwork changes throughout this manuscript to reflect the different stages of the poem.  Dante’s visual imagery is rich and occasionally quite strange, yet the artist of this manuscript took on the grand task of representing the un-representable (and we rather think he succeeded). 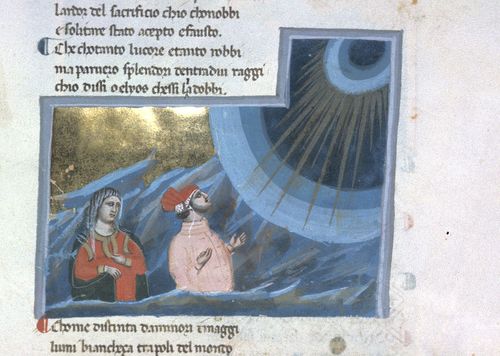 The souls in the Heaven of Jupiter form the shape of an eagle.  Each stage of heaven corresponds to a virtue, and a planet.  Jupiter is where the just rulers abide. 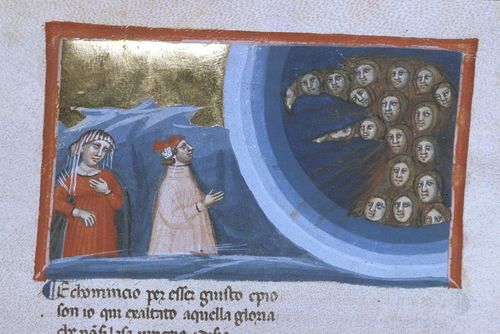 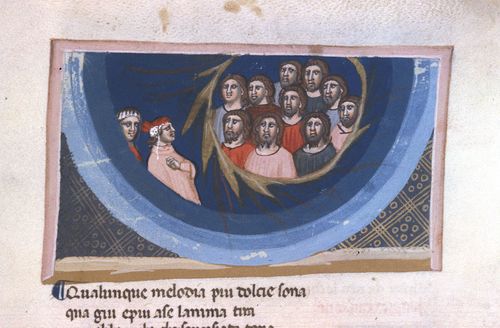 See how Dante begins to pass into the concentric circles of Heaven as he approaches closer and closer to a final meeting with God Himself. 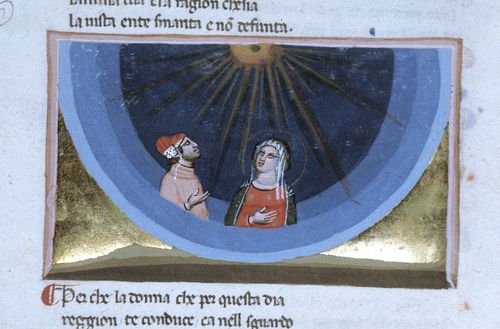 A white rose, made up of the souls of the saintly, is at the very heart of heaven, and of the entire cosmos.  It’s a very beautiful image (see below), and our artist matches the poem’s glorious language. 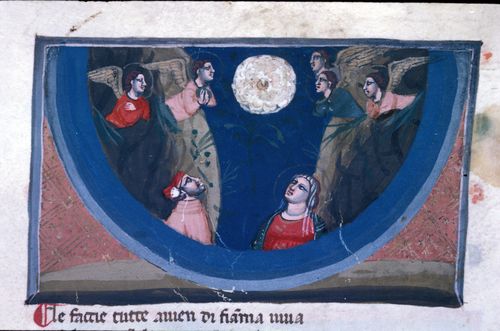 Beatrice takes her place in this scene amongst the saints, and then St Bernard of Clairvaux takes over in the final explanation to Dante, whilst pointing to the Virgin Mary at the heart of the rose (see below).  It was very bold of Dante to place his love in such august company, but throughout the poem Beatrice is depicted as both human and as something so much more than that.  Dante makes love, even romantic love, the road to contemplation of God, and the force that binds all of heaven together, as we can see in the final moments of the poem, in the description of the vision of God. 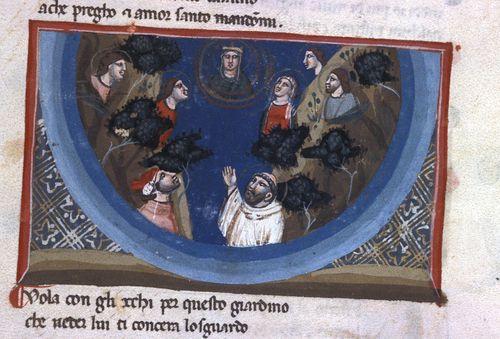 In the poem, Dante apologises that it was impossible for him to completely describe his vision of God, but that didn’t stop the artist of our manuscript from giving it a go.  God is shown here as three circles without circumference, representing the Trinity, and at the heart of it Dante sees a vision of both God and man in one. 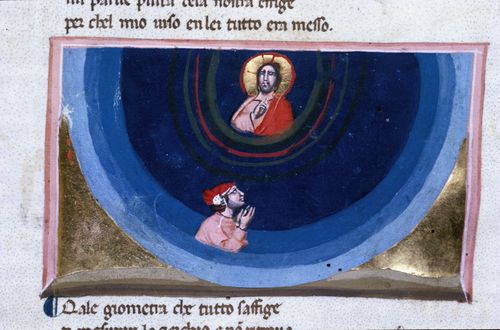 To quote from Dante just once, there is something from the following description we can just about see in the image above:  ‘Alone, you know yourself.  Known to yourself / you, knowing, love and smile on your own being’ (Paradiso, Canto 33, verses 125-126).  We can perhaps see from the image above what the artist took from that – a smile!  For Dante, God’s innermost essence was reflected in the very smile, given in passing, that led him to devote his life to the adoration of a young woman he barely knew.  We would definitely recommend having a try at reading the Divine Comedy, and perhaps having Egerton MS 943 open as you do.  It’s not always an easy read, but you’ll find plenty of smiles within.