Attention all budding alchemists!  Four of the British Library’s ‘Ripley Scrolls’ (Add MS 5025) are the latest additions to our Digitised Manuscripts website. They are currently on loan to the Museum Kunstpalast in Düsseldorf as part of an exhibition on ‘Art and Alchemy: The Mystery of Transformation’ until 10 August, starring alongside works by Lucas Cranach the Elder, Rembrandt van Rijn, Peter Paul Rubens and many others. 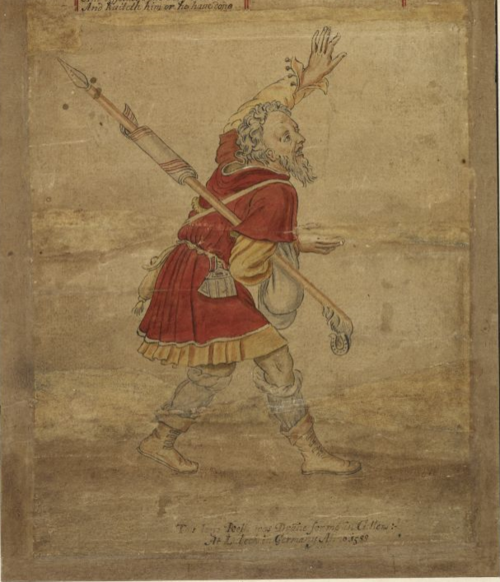 Based on The Compound of Alchemy of George Ripley (d. c. 1490) and other pseudo-scientific texts, these scrolls are intriguing, bizarre and perplexing in equal measure.  They date from around the end of the 16th century to the beginning of the seventeenth century, however their origins are unknown.  An inscription on the second scroll records that ‘This long Rolle was Dra[ur]ne for me in Cullers at Lubeck in Germany  Anno 1588’ – however, two other scrolls bear a similar note, so neither the date nor the location may be established with any certainty. 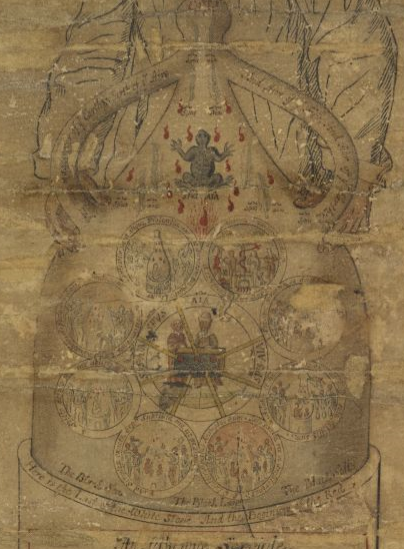 Detail of a hermetic illustrating stages in the alchemical process and the revelation of alchemical wisdom, Add MS 5025, f. 4r.

The scrolls illustrate stages in the alchemical process of preparing the philosopher’s stone, which was needed to turn base metals into gold.  The scrolls give visual form to the furnaces, flasks and other paraphernalia its practitioners were supposed to use.  They also contain emblematic imagery whose meaning remains obscure to scholars as well as more familiar symbols, such as the zodiac. 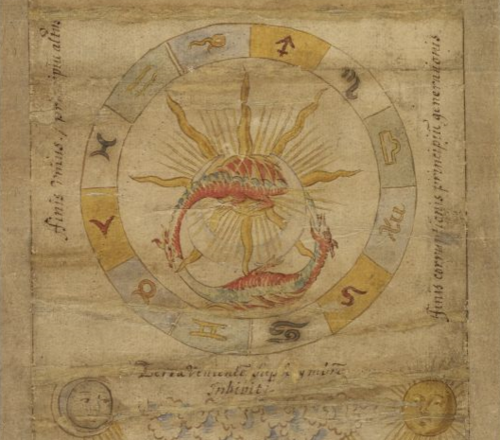 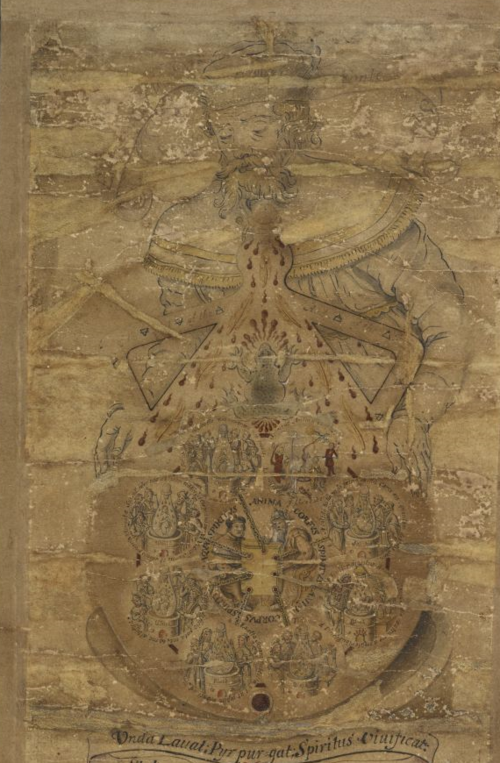 The large figure at the top of the second, third and fourth scrolls probably represents Hermes Trismegistus, the ancient and likely mythical author of hermetic texts that later formed the basis of alchemical experimentation in the medieval and early modern periods. Alchemists (often holding flasks or overseeing experiments) are depicted throughout the scrolls, alongside symbolic figures of unknown significance. Labels on some of these figures suggest they represent the elements that alchemists sought to transpose during their experiments. 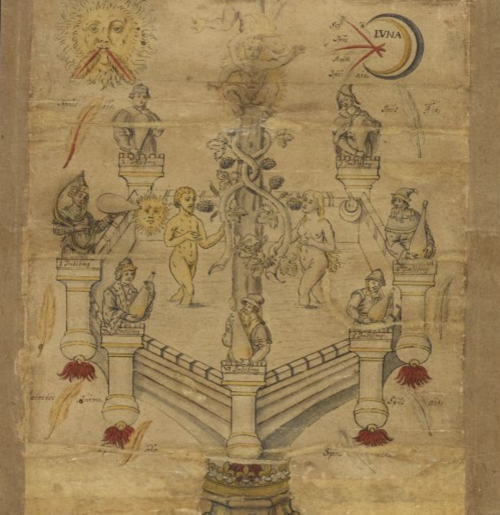 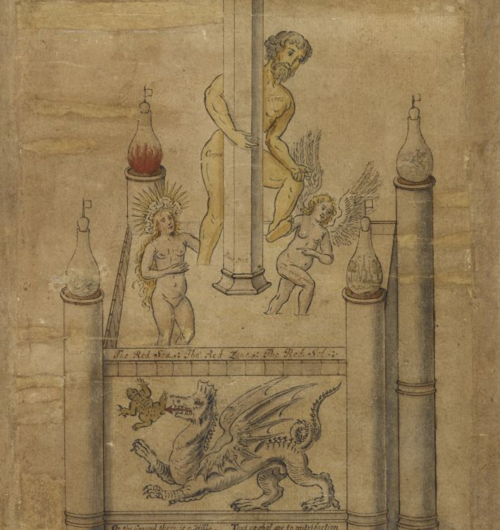 Detail of symbolic men and a woman surrounded by flasks, within an enclosure decorated with a dragon vomiting a frog, Add MS 5025, f. 4r.

Alongside them is an array of fantastical and grotesque anthropomorphic creatures: a woman with the tail of a dragon, a Bird of Hermes (a bird with the head and torso of a human), and a winged dragon with female features (perhaps representing Satan). There are also real and mythical creatures worthy of any medieval bestiary: toads and frogs, dragons aplenty, lions, and a cockatrice. 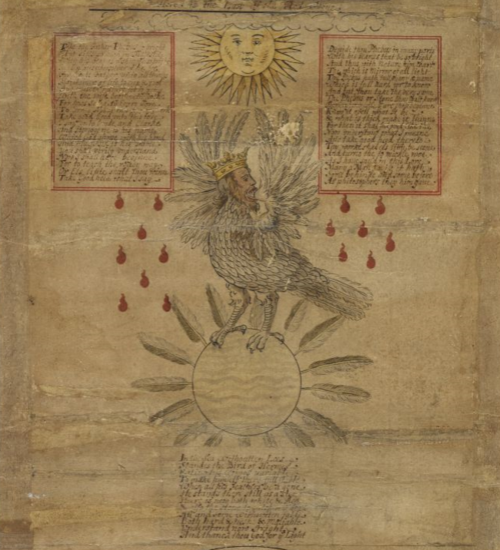 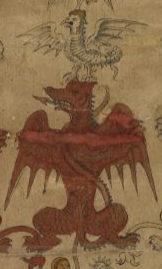 George Ripley was an Augustinian canon of Bridlington. He claimed to have studied at the University of Louvain, and there is evidence to indicate connections with Edward IV beyond Ripley’s dedication of The Compound to the king. Another British Library manuscript, Cotton MS Vitellius E X, contains a drawing of Ripley’s tomb at Bridlington, upon which alchemical symbols feature prominently, indicating the integration of alchemy with medieval Christianity. 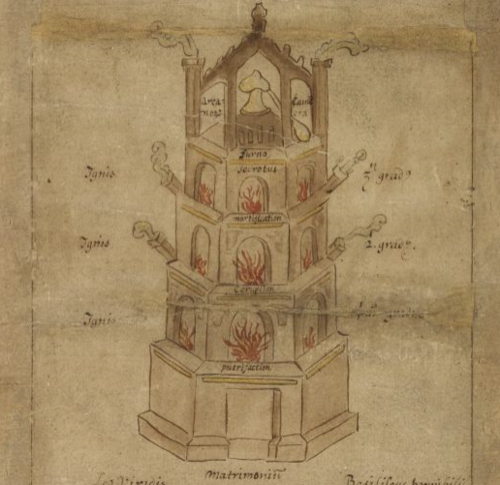 Seventeen other Ripley scrolls are known to survive, scattered across institutional collections in Britain and the United States. Recent studies have concentrated on comparative study of the different designs found on these scrolls. The four that make up Add MS 5025 represent each of the three main designs – and their availability on Digitised Manuscripts constitutes an important scholarly resource for the study of alchemy in the late medieval and early modern periods. There are two further Ripley Scrolls held at the British Library: Add MS 32621 and Sloane MS 2524A.