The Poetry of Fragments

While this can be frustrating, it also presents an exciting challenge to papyrologists. Sometimes fragmentary texts can be reconstructed based on attestations of the same work in other papyri or in the manuscript tradition. If it is a literary text, or a formulaic legal document, some educated guesswork can help figure out what the wider context might be. Particularly exciting are those instances where a scholar can reunite parts of the same original document, now scattered across the world. An excellent example of this is the recent article by Antonia Sarri in Greek, Roman, and Byzantine Studies, who shows that a papyrus in the British Library (Papyrus 2553) and one in Columbia University Library (P. Col. VIII 211) are two halves of the same letter.

A great deal of Greek poetry has only been preserved in papyrus fragments. In the case of some authors, such as Archilochus, Simonides, and Sappho, discoveries even in the last few decades have added greatly to what we know of their works, and in some cases have caused scholars to have to rethink some long-held beliefs about the nature of early Greek poetry. The British Library has only a single fragment of Sappho, a very early arrival from the great collection of papyri found at Oxyrhynchus (P. Oxy. I 7). 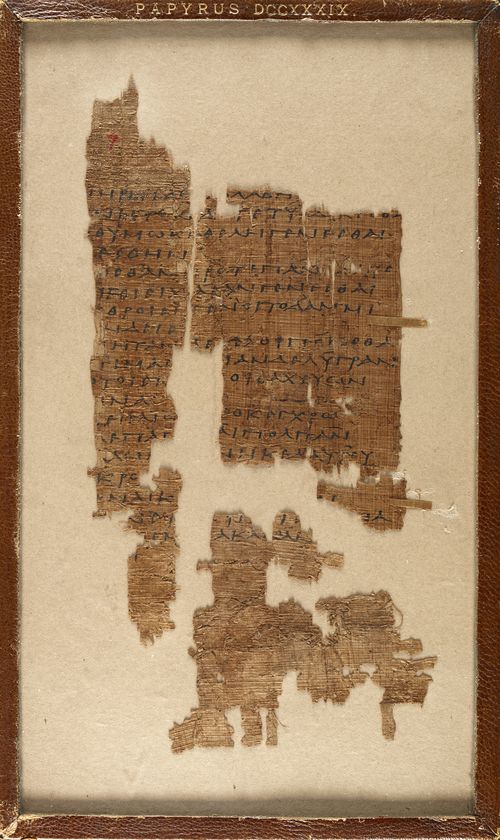 Fragment of a poem by Sappho concerning her brother Charaxus, Papyrus 739

But as fragments of Sappho go, it’s a pretty good one – we can be fairly sure of the text of two stanzas, and have a decent chunk of three more. In the poem, Sappho prays for the safe return for her brother and hopes that they can be reconciled. This is presumably Charaxos, whose falling-out with his sister is described by Herodotus (2.134-5), and who is named in the new Sappho poem published earlier this year.

While the text is exciting in itself, there is something very special about viewing the original papyrus, which helps to give a sense of just how serendipitous our knowledge of Sappho’s poetry is. Sappho joins Homer and Sophocles on our Digitised Manuscripts roster of poets on papyrus: we hope to add many more in the future.